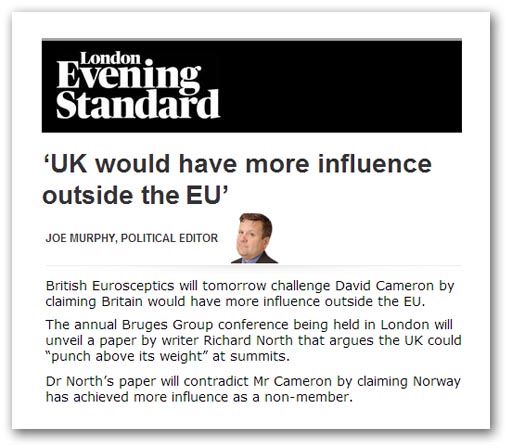 A day out in London with The Bruges Group today gives us some publicity from the Evening Standard..

British Eurosceptics, we are told, will challenge David Cameron by claiming Britain would have more influence outside the EU. The annual Bruges Group conference being held in London will unveil a paper by writer Richard North that argues the UK could "punch above its weight" at summits.

Dr North's paper (available online here) will contradict Mr Cameron by claiming Norway has achieved more influence as a non-member. "Compared with the UK (and any other EU Member State), Norway has far more autonomy and influence, and for a relatively small country with a population of five million, it punches massively above its weight", he will say.

Dr North argues that most European laws originate at global talks, where Britain could enjoy greater influence if it joined talks as an independent nation instead of letting Brussels negotiate on its behalf.

In a speech last December, Mr Cameron derided the idea that Britain could copy Norway and leave the EU and enjoy sovereignty in a free trade area.

He said: "You can be like Norway, and you can have full access to the single market but you have absolutely no say over the rules of that market. In Norway they sometimes call it 'government by fax' because you are simply taking the instructions about every rule in the single market from Brussels".

And so the battle to root out the lie continues. But that means blogging will be light today. I'll post again when I get back home.