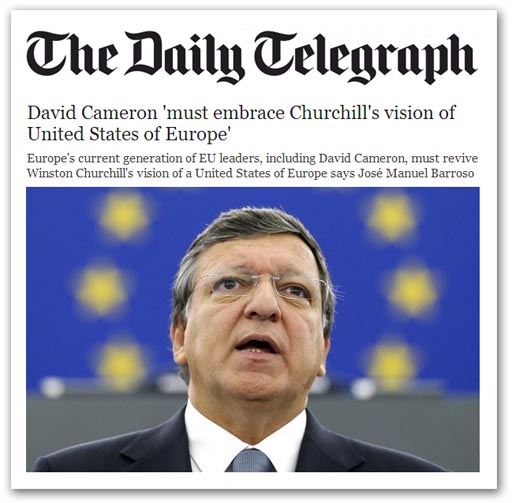 David Cameron and other European Union leaders need to show the same political courage and vision of Winston Churchill's call for "a kind of United States of Europe", José Manuel Barroso has said.

This is according to Bruno of Brussels, who has it that the European Commission president has urged the EU of today to emulate the wartime British Conservative leader's call, made in a 1948 speech, for deeper integration in Europe.

This welcome move is tantamount to Barroso calling for the UK to leave the EU, as Booker and I explain in our book, The Great Deception, the relevant passage starting in Chapter three.

The official history of the European Union, as can be seen from the European Commission's Europa website and any number of other publications, we write, invariably begins with the period immediately after the Second World War. The Commission's version opens with the historic speech made by Winston Churchill in the Great Hall of Zurich University on 19 September 1946.

After painting a typically robust picture of the "plight to which Europe has been reduced" by the "frightful nationalistic quarrels originated by the Teutonic nations', Britain's revered wartime leader held out his vision of how the hundreds of millions of inhabitants of this unhappy and ruined continent might "regain the simple joys and hopes which make life worth living".

To achieve peace, freedom and an end to "all the crimes and follies of the past", he said, "we must build a kind of United States of Europe".

Churchill was to renew his message in three more major speeches in the years that followed, in London in 1947, at The Hague in 1948, and in Strasbourg in 1949. These rallying calls by Europe's only statesman at that time of world stature would later be claimed as having been the inspiration for the steps which eventually led to the European Union: a project in which it would also be claimed that Churchill wished Britain to play a central part. In every respect this is based on a misreading of the facts.

For a start there was a crucial distinction between the type of united Europe envisioned by Churchill and that which would begin to take shape in the 1950s. He made this clear by his references at Zurich to the "pan-European union" which had been worked for by that "famous French patriot and statesman Aristide Briand", and to that "immense body which was brought into being amidst high hopes after the First World War  the League of Nations".

At all times, Churchill was essentially looking back to that internationalist idealism of the 1920s, associated with Briand, Stresemann and Coudenhove: a "United States of Europe" based on an alliance of sovereign states.

Booker and I wrote that it was precisely this type of "intergovernmentalism" which the founders of what was to be the European Union regarded as their greatest obstacle. Indeed, when their project was finally launched, the man chiefly responsible for it was openly dismissive of Churchill's type of "United Europe".

It is strange, therefore, that Barroso should be citing the 1948 speech, as that was at the Congress of Europe in The Hague on 7 May 1948, from which was founded the rival construct of the Council of Europe.
Churchill saw this as one of several regional councils, "august but subordinate", which should "form the massive pillars upon which the world organisation would be founded in majesty and calm". He saw the vast Soviet Union forming one of these groups. The Council of Europe, including Great Britain linked with her Empire and Commonwealth, would be another. Thirdly, there was the United States and her sister republics in the Western Hemisphere "with all their great spheres of interest and influence".

In this event, while the UK was to be part of a European grouping  the Council of Europe - this was not a model for a European Union which would become a United States of Europe. It was, in fact, a rival grouping, subordinate to the United Nations. Jean Monnet was convinced that his goal could only be reached in a wholly different way.

Yet, in terms of any greater degree of integration on the Monnet model, Churchill consistently made clear both at Zurich and later that he saw any "united Europe" rooted in "a partnership between France and Germany". Here, there was no question of Britain's direct participation. "In all this urgent work", as he put it:

France and Germany must take the lead together. Great Britain, the British Commonwealth of Nations, mighty America, and, I trust, Soviet Russiamust be the friends and sponsors of the new Europe, and must champion its right to live.

In the earlier meeting of 1947, at the Albert Hall in London, he had conjured up his vision of a "Temple of World Peace", which would have "four pillars": the USA; the Soviet Union; a "United States of Europe"; and, quite separately, "the British Empire and Commonwealth". Ironically, this was almost the only point on which Churchill and Monnet were agreed. If a "United States of Europe" was to be brought about, it would be without Britain.

Thus, if Barroso wants an EU modelled on Churchill's ideas, "a man of foresight with an acute sense of history, often ahead of prevailing opinion", then this is clearly one without the UK.
But Barroso is saying that he wants the current generation of European leaders to show the same Churchillian vision and courage. Thus, Mr Cameron should oblige him by arranging for the withdrawal of the UK from the EU as fast as is possible.