EU politics: neonicotinoids and the joys of isolation 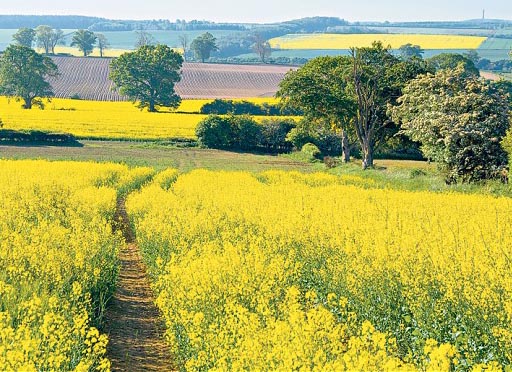 In an attempt to frighten us all into staying in the European Union, the CBI has been warning us of the perils of "isolation". It conveys in its recent report that the UK must use its influence in Europe, which – we are told - "has helped maximise the openness of the EU".

Well, that certainly was not the case when Secretary of State for the Environment, Owen Paterson, had last year to confront a potential ban on an important pesticide, the fruits of years of development at a cost of millions, and vital to British agriculture.

A saga which was to see him exert all possible "influence" in the EU, leading to abject failure, was to start at the end of March 2012, when two studies were published in the American journal Science suggesting that a certain pesticide was having a devastating effect on bees.

This was Cruiser OSR, developed by the Swiss chemical giant Syngenta, a pesticide from the neonicotinoid group based on an active substance known as thiametoxam. It was used very widely for treating oilseed rape seed and researchers were claiming that bees that had consumed nectar from treated seed, even in very low doses, showed disorientation and difficulties returning to their hives.

Now, there seemed to be a possible explanation for a catastrophic decline in the bee population throughout Northern hemisphere. However, the studies were equivocal and, normally, would have only been of academic interest. But this was the French election year and there was less than a month to go before the first round of the French presidential election.

And in France, where the agricultural industry was still influential, with a strong artisan base, the numerically strong National Union of French Apiculture (UNAF) had already been campaigning against the use of Cruiser OSR. For agriculture minister Bruno Le Maire, who had personally approved the product in 2010, the findings were a hot potato. Already considered to be too close to corporate business, he was now fighting for his political life.

Contemporary media records that he was having to fight off calls by UNAF and a coalition of Green groups network (France Nature Environnement - FNE) for an immediate ban. As a defensive move, he asked for reports from his own National Agency for the Safety of Food, Environment and Labour (ANSES), and the European Food Safety Authority (EFSA).

The reports were to be delivered by 31 May, after the election was safely in the bag.  If the scientific findings were confirmed, Le Marie promised, marketing authorisation of Cruiser OSR would be removed before the next rape planting season in the autumn.

UNAF was highly suspicious, charging that Le Marie was only acting because of the election – not that it did him any good. As it turned out, Sarkozy's UMP was ejected. Le Maire was out of a job. In came Hollande's Socialist Party, and with it a new agriculture minister, former MEP Stéphane Le Foll (pictured below), a politician committed to "resocialising rural territories in France".

Installed on 16 May, ten days after Hollande had won the second round, Le Foll was a powerful player in the Socialist hierarchy, having been the new president's campaign organiser, masterminding his rise to power. 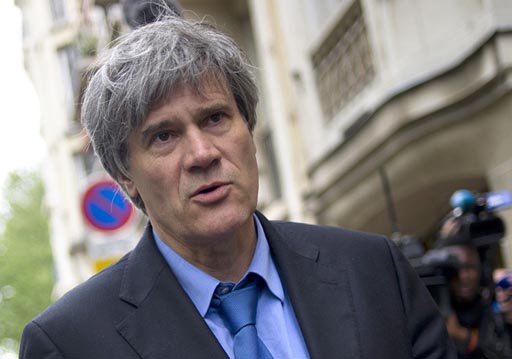 Now, this highly political animals was head of the agriculture ministry, and, with strong "green" credentials, was determined to "rethink agricultural project". President of the Groupe Saint Germain, he was a strong "climate change" campaigner and was determined to "reconnect" ecology and agriculture.
To that end in July 2013, with Philippe Martin, Le Foll  was to combine the ministries of agriculture and ecology. In office, he was to say that he did not believe in herbicides. "I challenge the very principle of the herbicide: we must organise the competition between plants to get the best", he said.

This was the man then who was going to decide the fate of Cruiser OSR. Thus, to no one's surprise at all, on 1 June, in a remarkable press conference, he announced his intention to ban the product.

To justify this move, he claimed the support of his own agency, ANSES and also EFSA. However, while Le Foll asserted that the pesticide was giving rise to an "adverse effect", affecting foraging success and survival in honey bees, critics noted that that finding relied on laboratory tests using doses of thiamethoxam at ten times levels found in the field.

Furthermore, neither ANSES nor EFSA actually confirmed the evidence of any adverse effect. In fact, ANSES noted that the high dose used in the laboratory tests had never been encountered in the field, so the Science papers were  considered "not verified by the available evidence". EFSA said doses of neonicotinoids used in the research were above the highest residue levels recorded in plant nectar, adding that more studies were needed to evaluate exposure in different field situations.

In was nevertheless a highly publicised event, Reuters noted that there would be a delay of two weeks, to allow the manufacturer Syngenta to submit evidence defending the use of their product. That evidence materialised on 15 June but it had no effect. Le Foll had already made up his mind. On 29 June, he formally withdrew the marketing authorisation from Cruiser OSR.

The decision sent shockwaves throughout Europe, and especially in the UK, where oilseed rape is an important crop, and Cruiser an important plant protection product. Luke Gibbs, head of public affairs at Syngenta UK, was quick to reassure British growers that they would not be affected, but that was to reckon without the contagion, in which spread, the European Union was to play a fundamental part.

To lock in the ban locally, Le Foll needed the support of the European Commission, especially as the possibility of the EU over-ruling the French ban would have devastating political consequences.

Furthermore, while the ban was popular politically, French farmers would be at a distinct disadvantage with the rest of Europe if they were the only ones unable to use the pesticide. Syngenta estimated that they would lose €200m (Ł161m) per season through lost yield and crop protection. Le Foll thus instructed his ministry to push for an EU-wide ban on all neonicotinoids, lobbying the European Commission and the EFSA.

Back in June 2012, the Commission had no plans to proposing a member state restrictions on neonicotinoids, and was prepared to wait until EFSA reported its own assessment later in the year.

The EFSA assessment actually came on 16 January with a press release which was to set the issue on fire. It said it was unable to finalise its risk assessments "due to shortcomings in the available data" but nevertheless concluded that, "only uses on crops not attractive to honey bees were considered acceptable". This was to be the death knell of Cruiser OSR and related products, as oilseed rape is regarded as attractive to honey bees.

However, recently released documents show that the press release – which is all most people would have seen – misrepresented the EFSA report. Furthermore, from correspondence with the Agency and subsequent events, the misrepresentation appears to have been deliberate.

As regards thiametoxam, the Agency had actually identified no significant risk to bees and the press release was going far beyond the terms of the report, and indeed the Agency's remit. It role supposed to be limited to reviewing the evidence, not to define the acceptability of risks – that was the responsibility of the Commission and member states.

With sight of the draft press release containing the misrepresentation, the day before its release, the manufacturer Syngenta had urgently called upon the Agency to correct it. In response, EFSA staff prepared a revised release. 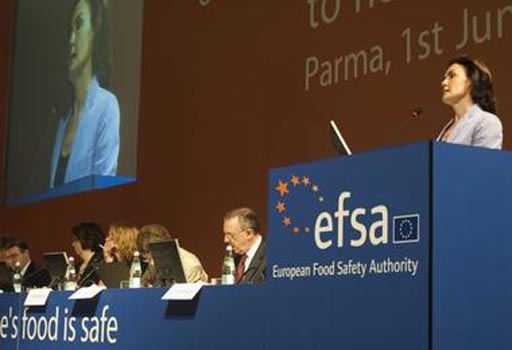 But, according to internal documents recently obtained through EU public access regulations (Regulation (EC) No 1049/2001), French-born EFSA Director General Catherine Geslain-Lanéelle (pictured above) had blocked the revised version. "No change needed in the [press release]", she wrote on the morning of the 16th. The error remained in the final version.

After that, a Europe-wide ban was only a matter of time. A formal request was made by the Netherlands, asking the Commission to intervene, effectively citing the press release rather than the report. The Commission obliged on 31 January announcing its intention to suspend the market authorisation of the entire range of neonicotinoids for two years, pending further studies.

Predictably, Le Foll issued a statement saying he "welcomed" the Commission's announcement, which was "in line" with his decision to withdraw the authorisation for Cruiser OSR in France.

Two votes through the Council failed to reach a decision. On 29 April 2013, fifteen member states had supported the restriction, eight had voted against and four had abstained during the final vote, thus failing to muster a qualified majority. This allowed the Commission to invoke its right under the comitology procedure to make a decision, which was adopted on 24 May 2013.

The UK, through its Secretary of State for the Environment, Owen Paterson, had been mounting a spirited defence, arguing for more and better scientific studies. But he was unable to prevail. Despite the total absence of scientific evidence to support the ban, the UK was forced to fall into line and prohibit the use of a valuable crop-protection product.

But the story did not end there. This had not been the first time EFSA had been accused of conflict of interest and, last July, EFSA Director-General Catherine Geslain-Lanéelle resigned and took a plum job working directly for Le Foll as Director General for agricultural, agri-food and territorial policies.
Having personally played her part in protecting her new boss's back, ensuring that a local, politically-motivated ban did not disadvantage French farmers and become a political embarrassment, she was being appropriately rewarded.

Thus does British industry suffer from its membership of the European Union. On the other hand, "isolation" would enable it to protect itself from Continental electoral manoeuvring, and the contagion of European politics played out on the Brussels stage.

Mutual recognition of market authorisation arrangements would allow the UK to take a full part in the Single Market for crop protection products, yet insulate us from the damaging political infighting that we currently have to suffer. As with infectious disease, managed isolation is actually a good thing when needed to protect the national interest, something we could enjoy if we ignore the CBI and leave the EU.