EU politics: why can't we be more European? 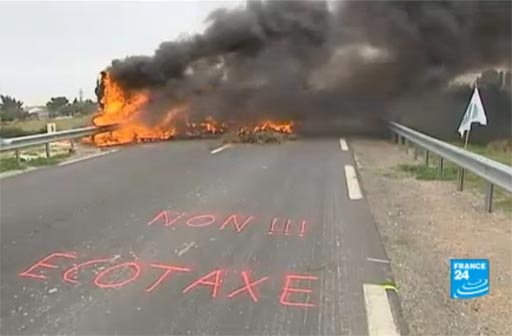 As the date for the implementation of a new "ecotax" on heavy road transport in France drew near – having been set in motion by the previous centre-right government under former president Nicolas Sarkozy in 2009 – mass protests broke out at the end of October. Workers in Brittany erupted into violence.

Between 500 and 1,000 demonstrators, including farmers, business owners and truck drivers, gathered in force in the Finistčre department in west Brittany. Protesters set fire to hay bales and stacks of tyres next to the ecotax toll gate at Pont-de-Buis, the only one still functioning in the region after the other two had been sabotaged.

As riot police arrived to quell the protests, demonstrators hurled eggs and flares at the security forces, who responded with volleys of teargas and shots from Flash-Ball weapons – controversial hand-held devices that fire non-lethal rubber bullets.

Then, last week there was a meeting between MPs from Brittany and French Prime Minister Jean-Marc Ayrault, from which followed a humiliating climbdown by the government. It "suspended indefinitely" the tax which was due to go into force in January 2014, "in order to avert the escalation of violence".

The gentle tax payers of Brittany, however, were far from impressed by this move and, last weekend were back on the roads to stage a march in Quimper. Between ten and 30,000 protesters traded stones and teargas with the police. Water cannon had to be brought in to quell the disorder.

Protesters meanwhile have taken to wearing red caps reminiscent of a 17th-century revolt against King Louis XIV's tax policies, and the government is now concerned that hard line "left-wing" groups are supporting the protests. Jean-Marc Ayrault is nevertheless reduced to cautioning protesters against a "spiral of violence", bleating lamely that, "Bretons' problems will be resolved only through negotiation".

Not unrelated to the magnitude of the victory, though, Hollande's approval rating has dropped to 26 percent – the lowest level of any French president in 32-years of polling by BVA.

However, it seems that not all French politicians have got the message. Agriculture minister Stéphane Le Foll insists that the problem is essentially one of "communication" and that the government's policies would eventually bear fruit. "There is an explanation problem and coherence in how all of the government expresses itself", he told Europe 1 radio on Sunday.

In an attempt to recover the situation, Hollande plans to "re-presidentialise" his battered image on Thursday when he kicks off ceremonies to commemorate the 100th anniversary of the start of the First World War. Then he hopes to lead off with a message of "unity, solidarity and the will to live together".

The protesters, on the other hand, seem to have more in mind the slogan liberté, égalité, fraternité as they are set to recreate the French revolution. And, as we gaze in awe from this side of the Channel at this triumphant exhibition of people power, not a few of us here ask why we cannot be more European.