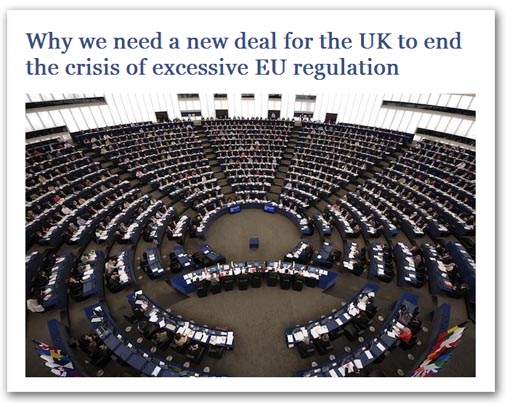 I actually spent much of yesterday wearily avoiding the Business for Britain report on "research" which tells us that 46 percent of British businesses say that costs of complying with Single Market outweigh the benefits of being in the EU. That is compared with 37 percent who think the benefits outweigh the costs.

Fortunately, Autonomous Mind did the business, so to speak, savaging the survey, leaving me to do a more considered analysis of the wider issues raised.

You might think, though, that we are both being uncharitable about a piece of work – Matthew Elliott's finest – which, after all, would appear to be the bearer of good news. But, when you give this a moment's thought, it immediately becomes obvious that the whole idea of the survey is ill-founded.
For years now, sundry campaigners have been asking the government to carry out a cost-benefit analysis on our membership of the EU, specifically to determine that which the respondents of this survey are being asked. And for years, the government has refused to do so.

In relation to the individual business people questioned, one even has to wonder how they know the source of the regulations on which they are passing judgement. How do the distinguish between the cost of EU regulation, and regulation from other sources. Matthew Elliott, the author of the report, clearly doesn't know.

For instance, he sombrely tells us that the EU has legislated on environmental matters since 1973 and today "there is a comprehensive corpus of legislation, ranging from directives on local flora and fauna to the industrial emission permits".

He then tells us that the EU "defines the obligations with which industrial and agricultural activities with a high pollution potential must comply, among other things, creating a national emission ceiling and forcing polluters to pay for environmental damage".

And then, we get to learn that the EU "also requires businesses to carry out an environmental impact assessment (EIA) of public or private projects likely to have significant effects on the environment, prior to their authorisation (the Commission has stated that it wants to expand this power and increase the number of projects that will have to carry out EIAs) ".

The thing is that we've played this game before, and its getting a little boring – hence the weariness. But, when assessing the cost of EU regulation, we need to subtract the cost of national regulation that would have existed anyway, and the cost of the "gold-plating", where the British government has added significantly to the burden.

Then, there is the international or "soft" law, the myriad of agreements, conventions and treaties, the source of which are often completely obscured by the time they have been laundered through the EU and are implemented at national level.

And it is here, like the Muppets in Open Europe before him, that Elliott comes a cropper. Glibly, he talks of environmental impact assessments yet, as we know, this provision is in part due to the Aarhus Convention, a child of UNECE, and in part due to the SPOO Convention of 1991.

The bottom line here is that no one has the first idea how much regulation is costing or where the cost-benefit line runs, much less what the specific EU component might be – the excess cost incurred had we never joined the Union.

But what is coming more and more into high profile is the increasing globalisation of regulation. This we saw once again when we were exploring tax sovereignty. Here, the position of the UK is not dissimilar to the victim in a horror movie, trapped alive in an as-yet unburied coffin. Having broken through the lid in a bid to escape, he finds to his consternation that there is another lid over the first.

Thus, before we even get to the point of a supposed renegotiation, which is what Business for Britain is angling after, we see that the argument has already run into the sand. Leaving the EU is going to afford us very little regulatory relief – at least in the short to medium term.

As a result, those of us who have really thought about winning an "out" campaign, and have long practical experience in EU affairs, have concluded that the regulatory burden is not an issue over which we can go to the barricades. If we break out from the tedious stupidity of the likes of this from Oliver Hemsley, chief executive of Numis and signatory to Business for Britain, and look at the wider world, we will find that there is very little public interest in the regulatory burden, per se.

In fact, outside the business community, most people see business regulation as a vaguely good thing. And, when we see the predatory behaviour of the corporates, the peculation of the banks, and the rip-off utilities, who would argue differently? After all, was it not EU regulation that forced down the cost of mobile roaming, and which is forcing the pace on compensation for delayed and cancelled flights?  Is it not the EU which is going to put a cap on bankers' bonuses?

The point here is that two can play the regulation game. It is a double-edged sword - one which has the potential to do the anti-EU movement more harm than good. Tactical illiterates such as Matthew Elliott (and his europhile friends in Open Europe are doing us no favours by focusing on the issue.

What really matters, especially when the lack of sovereignty is seen to be harmful to our national interest, is who runs Britain - our own governments, Brussels, or beyond. People want to see that government is acting in our interests rather than responding to the demands of overseas agencies.

When it comes to global governance, divesting ourselves of EU control allows us to resume our seats at the real top tables, at present occupied by EU officials. Then, when we do implement offshore regulation – as, indeed we will always have to - we will know where it came from and that we had an opportunity of rejecting it when it was not in our national interest.

This, to my mind, is where the battle will be fought - on matters of high principle. We will not win a campaign by endlessly rehearsing the stale, tired old issues that we were arguing over 20 years ago when the Maastricht Treaty was coming into force.

At least, though, on the 20th anniversary of that treaty's commencement, we are becoming more acquainted with the tactical ineptitude of a man who would have led an "out" campaign to call for "a better deal from Brussels", thereby ensuring its defeat,

Fortunately, we still have time to work round the derivative, lack-lustre campaign points that Elliott and his europlastic allies are raising. This, eventually, will allow us to develop and explain the key issues in time for 2021-22, when we have to fight the battle for real.