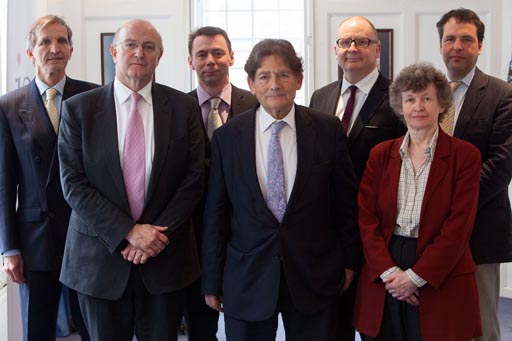 Well, it seems that my misgivings were misplaced. This fine body from the IEA (pictured) comprise the judges of the €100,000 Brexit prize has decided that our essay should be one of the twenty qualifiers, allowing us to go forward to the next and final stage of the competition.

In all, 149 entries were submitted: 100 were from the UK and 49 of them from other countries, including the USA, France, Germany, Greece, Ireland, The Netherlands, Ukraine, Nigeria, Hungary, Zambia, Latvia, Austria, India, Norway, Zimbabwe, Denmark, Belgium, Russia and The Philippines.

Ours was a genuine "crowdsourcing" exercise, with many inputs and other assistance from readers, for which I am profoundly grateful. Thus, I marked the author of the submission as myself, "with the assistance of readers of the EU Referendum blog". So, congratulations everybody – we did it.

Now the work starts for real. We have until 10 February to prepare and submit an essay of about 20,000 words, with the winner announced in March 2014. And, in addition to the original brief, the prize organisers have issued further, as yet unpublished, guidance, and we need to take this into account.

The paper, we are told, should not concern itself with reasons as to why the UK might exit the EU or the advantages or disadvantages of such a step, nor should it spend time looking at how such a situation might arise. The starting point is that the decision to leave has already been taken and the paper should explore and set out a programme of policy steps to be followed by a UK government in that event.

We are also told that, while, obviously, we need to consider the precise mechanism and procedure for exit, this should not be the main or primary focus of the final submission. Rather the full submission should look at the areas of government policy and overall political economy that would be affected by a UK exit and suggest a coherent and structured set of policy responses.

The most obvious one, it is suggested, is trade policy but there are many others, notably regulation in general, foreign and fiscal policies and wider questions of economic policy.

Wherever possible, we are enjoined to seek to provide costed and quantitative estimates and arguments. For example (and this only as an example, not a suggestion) there could be an analysis of trade flows over the last thirty years with estimates of where the greatest potential advantages from bilateral trade deals might lie.

We are also asked to set out the trade policy options that would confront the UK - from unilateral free trade through to joining particular free trade areas or remaining in the EEA, where the fastest benefits of lower trade barriers might be achieved, and what impediments might stand in the way.

As before, I would welcome any help: advice, ideas or direct assistance, and in particular I would appreciate views on how we deal with costing out the options we might present. These can either go on the forum, on The Boiling Frog comments - with this piece, or with Autonomous Mind - or you can e-mail me via the blog, with your observations.

This time, though, the stakes are very much higher. There are three prizes, of €100,000, €10,000 and €5,000 for third, and with only 20 finalists we have a real chance of winning. Thus, I will not be publishing any material which might be helpful to competitors – the names of whom will be published later today.

Anyhow, congratulations again and thanks to all concerned. Even if we get no further, just to get shortlisted is an achievement, so I think we can all be rightly proud of what we have done.