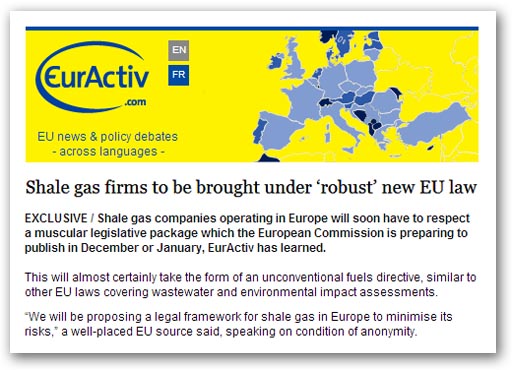 Following on from Connie Hedegaard's re-affirmation that the Commission intends to bring out specific legislation to regulate shale gas exploitation, Euractiv has published an exclusive, warning that the legislative package, now expected in December or January, will be "muscular".

With the news yet to sink in, news in today has GDF Suez, France's biggest supplier of natural gas, became the second utility to buy into UK shale. The French company has acquired a 25 percent interest in 13 licenses in northern England's Bowland basin for a down-payment of Ł7.4 million and an undertaking to cover 75 percent of the costs of a three-year exploration campaign, up to Ł16.7 million.

Although this is seen as a major vote of confidence in the nascent UK shale gas industry, that may be misplaced. The shale resource, potentially running to about 1,300 trillion cubic feet of gas, is to get only four of the 14 exploration wells, the other ten targeting coal-bed methane.

The total investment of less than Ł25 million is chump change in exploration terms and, given the theoretical value of the resource and the fact that only a fraction of the effort is directed to shale, this tends to suggest that the industry is still being cautious about potential yields and profitability. Even as a tax loss, this is a tiny sum for a major energy company.

Certainly, the potential regulatory burden must be a major factor in assessing forward value, especially in terms of its potential to delay exploitation and to add considerably to costs.

Then, as I pointed out earlier, even with a fair wind, we are not going to see commercial drilling until the end of the decade but, if extraction rates prove to be marginal, the proposed regulation could tip the balance, and drive gas exploitation out of Europe altogether.

With the Geneva-Brussels nexus gearing up to make the regulation as rigorous as possible, with the deliberate intention of blocking development, the optimists completely fail to recognise that neither the industry nor the UK government has any control over pivotal aspects of regulation which will play a major part in determining whether the industry is viable.

Instead, political battles which, potentially, will have a dramatic effect on any British industrial renaissance, and indeed whether or not one materialises, will be fought out between Brussels and Geneva, with a phalanx of environmental NGOs in the lists, largely funded by the EU under the Life+ programme.

It is probably fair to say that rarely in recent times has so much depended on the actions of agencies outside these shores, over which we exert so little control. But already, with the Commission signalling its determination to legislate on shale gas, this drives a cart and horse through Mr Cameron's carefully stage-managed deregulation initiative. The prime minister of the United Kingdom is not in the driving seat.