EU Regulation: the children at play 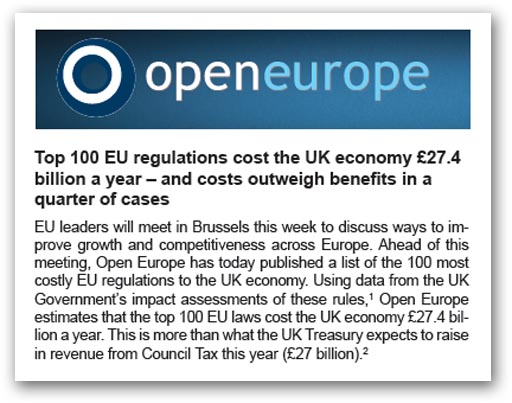 Today, as a special treat, the boys and girls in Open Europe are telling us that the top "100 EU laws" cost the UK economy £27.4 billion a year. This, they aver, "is more than what the UK Treasury expects to raise in revenue from Council Tax this year (£27 billion)".

Before they go any further, though, someone should take them aside and tell them that the Treasury doesn't raise any money through Council Tax. This is a local tax, collected by local authorities, something every householder in the country knows, but apparently not the children in OE.

However, this facile display of ignorance sets the tone for a self-important "briefing note", where the children presume to instruct their seniors (if not their betters) as to the cost of EU regulation, so that Mr Cameron might be better informed when he goes to Brussels this week "to discuss ways to improve growth and competitiveness across Europe".

Problematically, though, of their list of "100 EU laws", by far the majority of cost is incurred from regulation bearing the EU label, but which is either of UK or global origin, or regulation which has taken the place of national law.

Of this, at last, the boys and girls of OE seem dimly aware, noting that "it would be wrong to assume that these regulatory costs would magically disappear if the UK were to leave the EU". It's taken them long enough to realise this but, at last, the penny (or euro cent?) is beginning to drop.

"The UK Government", trill the children, "would probably want to keep a good number of these laws in part or in full  anti-discrimination laws, some health and safety rules, food safety standards, and so forth".

Nevertheless, it is difficult to suppress a smile when they tell us with all the gravitas of a three-year-old telling us that poo is brown, that "the best way to achieve substantial cuts to the cost of these regulations to the UK economy is to renegotiate them thoroughly at the EU level".

Diving straight into their fabulous list, we thus see their number one as the CRD IV package, which is slated as costing £4.5 billion annually to implement, but bringing a "recurring benefit" of £15.25 billion.

If we slip down to the bottom of the list where the totals hide, we see the total cost of the "EU" law set at £27.42 billion, while the gross benefit is costed a £57.1 billion. In other words  according to the figures on which the OE relies - we actually save £30 billion by adopting the top 100 EU laws. And these, they want to "renegotiate"?

It is elsewhere, though, that the boys and girls also have trouble. Never sullying their tender little brains with reading the harsh words of the EU Referendum blog, they do not appear to understand that their number one hit, the CRD IV package stems almost entirely from the Basel III agreement, negotiated with our global banking partners via the Basel Committee on Banking Supervision.

Most certainly, the EU has indulged in a degree of tweaking and applied its own brand of "gold plating", but if we were ever to seek to renegotiate the package thoroughly, it would not be at the EU level but in the secretive offices of the Basel Committee. This is global standard setting.  It is not "EU law" - the "colleagues" are only the middle-men.

Next on the list is Working Time Regulations, based on Directive 2003/88/EC, which the children also want to pin entirely on "Europe". They ignore the fact that the core requirements are based on ILO conventions which we would have adopted anyway, or something very much like it. As for the considerable "gold plating", we could deal with this without ever having to leave these shores.

Then we come to item three, the inclusion of which most adequately shows up the limited horizons of the OE boys and girls. Solemnly, they tell us that the EU "Climate and Energy Package" is costing us £3.3 billion a year, but gives us a recurring benefit of £20.4 billion.

On the face of it, OE has a problem wanting to renegotiate something that is apparently saving us £17 billion a year. This, they get round by saying that the stated benefits of this regulation are reliant on two assumptions.

Firstly, they say, "a global deal is struck on climate change" and, secondly, "the EU is pivotal in securing this deal". But in reality, the children intone, "neither of these has come to pass. Globally, emissions continue to rise and there is no deal in sight". By their clever estimates, "this erases around 95 percent of the benefits of this regulation, leaving only small localised benefits from cutting emissions and switching to renewable energy".

That statement is stupidity on steroids, but not least of the issues here is that the Muppets actually tell us that "a global deal is struck on climate change". Yes, my darlings, this is "a global deal", as in the UN Framework Convention on Climate Change (UNFCC), with the assistance of the IPCC.

And here, the point is that, in pursuit of the "global deal", the UK has gone ahead of the EU with its Climate Change Act which, as Booker tells us, is to cost us, every year between now and 2050, up to £18.3 billion. As to the EU, the UK has been a leading agency in pushing the climate change agenda on the European stage. The idea that things would have been any different had we not been in the EU  or will be any different if we leave  is utterly fatuous.

Dipping further into the OE, one finds the children then going for the Agency Workers Directives, which is largely EU, but has a slated cost of £2 billion, against the "benefit" of £1.5 billion. Then we get the Building Regulations 2006, which most probably would be almost identical had we not joined the EU.  The European regulations simply update the UK's 1963 Regulations.

Joy of joys, we then see the Motor Vehicles (EC Type Approval) (Amendment) Regulations 2008 which, without so much as a blush the boys and girls attribute to the EU, even though the origin of such regulations is now with UNECE.

It is really quite odd how resistant some people are to the idea of global regulation, but if you have been wedded to the idea of excessive EU regulation, as with Tim Congdon, it is very hard to switch horses and wake up to the march of globalisation. Having established their narrative, people don't want to break out of their comfort zones and come to terms with disturbing and complex changes.

So it is with Open Europe and the newspapers. This is clearly the case with the comedic Express which swallows the OE bait hook, line and sinker, then trots out the blind to lead the blind, in the form of John O'Connell, teenage research director of the TaxPayers Alliance, for a comfort quote.

"Regulations from Brussels are costing British businesses a fortune", chirps O'Connell, who then offers the clunking boilerplate, dreamed up decades before he got out of the maternity ward. "Too much time is spent complying with laws dreamed up by Eurocrats instead of getting on with creating jobs and growth", he drones.
This Janet and John approach is meat and drink to the legacy media, which hasn't the brains to look beyond the press release, nor the wit to look wider than the comic-book pastiche offered by Open Europe. As you would expect, it is lapped up by the likes of the Telegraph and, of course, the Daily Mail, adding to the mythology and disinformation.

For our own part, the issue is not regulation, per se but who makes the regulations, and the degree of control the UK is able to exert over its adoption. Outside the EU, we would most certainly keep most if not all of the OE top 100 on the statute book  especially if we remained in the EEA. But we would have greater control over how we adopted it, and the option of rejecting specific rules that were against the national interest.

That is actually the issue, not spurious arithmetic bolstered by questionable assertions from the closed minds of Open Europe. We need an adult discussion here, and this is not something we can get with the children at play, talking to an infantile media.