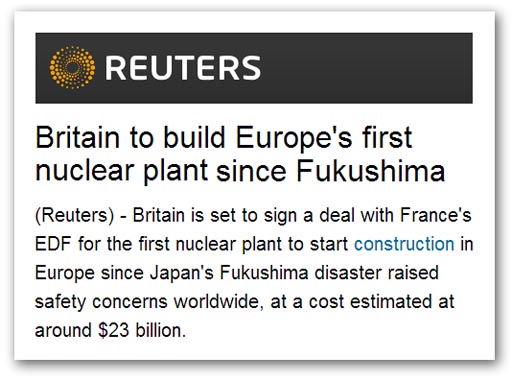 The forthcoming announcement of the construction of a giant new nuclear plant at Hinkley Point is expected to confirm a price of about Ł14 billion for two 1.6 GW reactors. That represents a staggering Ł4.4 billion per installed GW.

But what is so staggering is the way costs have escalated over such a short period. In 2007, we were looking at the Flamanville 3 reactor in Normandy. A European Pressure Water Reactors (EPR) – like Hinkley Point – it is another EDF-led enterprise and in 2008 the cost of the 1.65 GW unit was estimated at Ł1.4 billion – effectively about Ł1 billion per installed GW.

The new plant was planned to enter service in 2012 but, on 3 December 2012, the French state-owned EDF announced that the cost had escalated to Ł7 billion and completion had been delayed to 2016. The price hike brought capital costs to about Ł4.2 billion per GW installed.

Across the Atlantic, we also have the example of the Vogtle Plant in Georgia USA, with two 1.25GW reactors. Originally costed at $14 billion (Ł8.66 billion), that equates to Ł3.5 billion per GW, although there is currently a dispute about a $900 million overspend. If this is accepted, it will bring the overall cost close to the European level.

The huge construction cost of the Hinkley Point plant sees the so-called "strike price", over which EDF and Britain have wrangled for more than a year, set at Ł92.50 per megawatt-hour. That is the sale price of the electricity from the plant, working out at more than twice current market levels, agreed between government and the plant owners in order to guarantee a return to investors.

Thus, government policy seems to be directed first at ensuring lucrative investment opportunities for foreign investors, which the China National Nuclear Corporation and China General Nuclear Power Corporation, which will be minority shareholders in the project

Speaking to the BBC, Dr Paul Dorfman, from the Energy Institute at University College London, says: "what it equates to actually is a subsidy and the coalition said they would never subsidise nuclear". Effectively, it is a subsidy of between Ł800 million to Ł1 billion a year that UK electricity user will be putting into the deep pockets of Chinese and French government-owned corporations."
Going back to March 2004, we saw a study carried out by PB Power for the Royal Academy of Engineering. It reported the then current cost per MWh at Ł23 nuclear fission plant, making it comparable with gas generation (CCGT) at Ł22 and coal-fired pulverised-fuel (PF) steam plant at Ł25.

In less than ten years, therefore, we have had a four-fold increase in cost, bringing nuclear to a level comparable with onshore wind, losing most if not all of the comparative cost advantage, and making it vastly more expensive than coal-fired generation.

Furthermore, since Hinkley Point is expected to provide as much as five percent of national consumption, the high price of its power will have a significant effect on the overall price of domestic electricity.

What is very far from clear, though, are the exact reasons why nuclear has increased in price so much. Nevertheless, in what is clearly a rigged market, the most likely culprit is the regulatory ratchet.
By increasing the time taken to approve schemes, and by adding to design and construction costs, regulation is reckoned to be enough to have caused the massive hike. And much of the regulation has been promoted by Green activists, the aim being to price nuclear power out of business.

According to this seminal book, the process has been going on a long time. Now, it would appear, the activism has achieved its effect. We have a nuclear disaster – but not one that the Greens had predicted.

As electricity costs rise, fuel poverty will kill vastly more than nuclear accidents are ever likely to. That is the real disaster, made all the worse by the fact that it is largely the result of deliberate ploys to increase the price of nuclear plants.