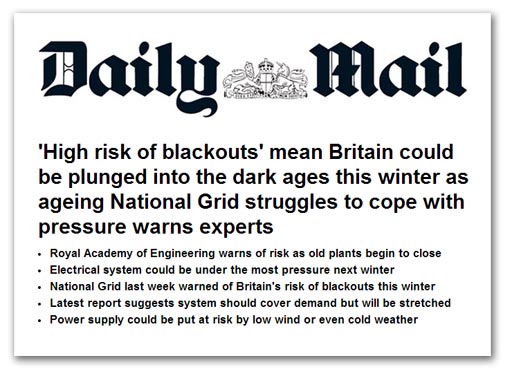 "Britain is facing a high risk of blackouts over the next five years as old power plants begin to close, leading engineers have warned", says the Daily Mail.

The paper then goes on to proclaim: that: "The ageing electrical system could be under the most pressure next winter, a Government-commissioned report published today by the Royal Academy of Engineering has predicted". Thereby, it completely contradicting its own headline, which tells us: "'High risk of blackouts' mean Britain could be plunged into the dark ages this winter".

Within the story, the contradiction is further reinforced when we are told, " … the latest study has suggested while the system should be able to cover expected demand, it could be stretched 'close to its limits'".

This is more or less what the Financial Times said last week (11 October - illustrated below), when it told us how National Grid was "consulting on how best to extend the use of other back-up systems such as emergency diesel-powered generators commonly installed at hospitals, waterworks and other essential services". These generators, it said, "which often stand idle, can be put to common purpose as times when supplies are threatened".

This, as readers of this blog know, is STOR – and also DSBR and Supplemental Balancing Reserve, which by next year – with the recommissioning of mothballed gas plants, if needed – gives us a "hidden reserve" of about 10GW.

The FT, in its article, says that if the various proposals for increasing the reserves are accepted by Ofgem, we will see "public sector organisations and private businesses, which maintain their own generators, competing to offer further capacity to the grid at times of stress". 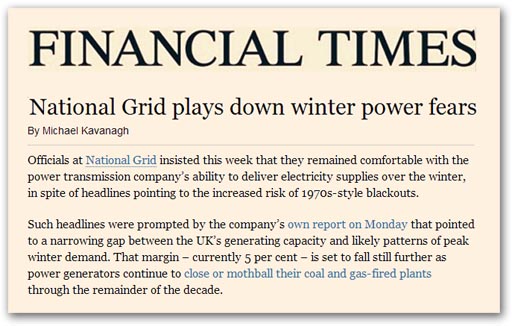 The downside, of course, is the cost, which "would ultimately be passed back to consumers". But we nevertheless have Peter Bingham, leading the development of these proposals at National Grid, saying: "It's prudent to have these additional tools available should electricity margins tighten mid-decade and to give us more flexible tools to balance the network in real time".

What this boils down to is exactly what we have been saying, where there has been a invisible revolution, which had Booker writing in July, where we have moved on from the shortage scenario to one where our lights will stay on, but "it will cost us a fortune".

What then of the prestigious Royal Academy of Engineering and its report? Well, despite the Mail headlines, what it actually says as part of its"key conclusions" is:

There are a number of market-based and political factors that are currently combining to bring about a reduction in the electricity capacity margin within the next five years. It is our view that this combination of factors, in the absence of intervention, would reduce the capacity margin during the time frame considered by this report, in a manner that would present an increasing risk to security of supply.

If there is a key phrase in this opaque passage, it is: "in the absence of intervention". In other words, if the National Grid, the generators and the utility companies do absolutely nothing from now onwards, and all their engineers stay in bed, there could be "an increasing risk to our security of supply".

Furthermore, to reach that conclusion, the Academy misses out completely the "hidden reserve", losing the 10GW inherent in the system that can be called upon at times of stress.
Given this apparent lacuna, it is thus pertinent to ask how this "prestigious source" actually came to its conclusions. And here, unadorned, we find that:

For the purpose of the press release (from which the journalists work), this is then translated into a study which included "interviews with a wide range of stakeholders, including investors, academics and large and small power generation companies".

What the Academy did, therefore, was talk to a lot of people in the industry, from whom they got a "wide range of perceptions of risk" with a recommendation that the industry should develop "a holistic energy system strategy". Electricity generation, the report says, is only one part of a complex and interconnected system.

Today's media stories, however, are completely oblivious to all this. The Mail, like the Guardian and others, look at one phrase, "capacity margin". They see that reducing and, as with the Academy – but unlike the FT, Booker and myself - ignore the "balancing reserve".

Thus do they invent a crisis, setting up the scare such a way that the real crisis – cost – is ignored. All the scare does, in fact, pave the way for more price increases, as people accept them as a cost for continued supply. What we don't get is any clarity, as to what is really going on.
COMMENT THREAD