Energy: scaling down the hype on shale 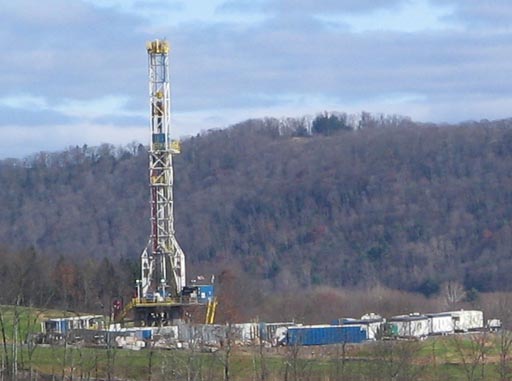 There are times, especially during the long summer beak, when it is difficult finding enough to write about on this blog. Once the political season restarts, though, this is very far from the case. Very quickly, we reach saturation point.
One of the problems for this blog is that we cover the EU in some depth, in addition to UK affairs. And that means, when necessary, covering all the institutions of the EU, including the Commission, the European Council – with its so-called "summits" – the Council of Ministers (now called the Council of the European Union) and, especially, the European Parliament.

The overload problem is, of course, ubiquitous, and we all have different strategies for dealing with it. One is that we become more selective. Others have a different strategy, covering all the ground, but at an incredibly superficial level.

You can see this with Conservative MEP Martin Callanan on the subject of shale gas drilling. While I found it necessary to write first this piece and then this, with Booker following up on the Sunday, in his own long monthly report, he disposes of the issue in one sentence: "There were also votes on shale gas, where the parliament foolishly wants every tiny exploration to be governed by onerous environmental impact assessments".

Mind you, this was one sentence more than we got from UKIP, and only one UK newspaper, the Telegraph, seems to have reported on the EP vote. Even then the story was wrong. The parliament did not vote "for new EU laws". Procedurally, it sent the report back to committee for further consideration and negotiation.

This error was one I shared in my original report – hence the need for a second post, to clarify a very complex issue. But there was no follow-through from the Telegraph. Those people who read the newspaper on this – and nothing else – will remain ill-informed.

On the other hand, everyone could have been extremely well informed, had they read the reports on this blog, the most comprehensive English-language accounts anywhere on the web, written by an acknowledged expert in the field. But, as we know, things don't work that way. And, while that is a statement of the obvious, it has taken me a little while to work out what I think is happening.

Essentially, it is not only the media (and blogs, etc.,) which develop strategies for dealing with information overload, but ordinary people as well. They will limit their own personal exposure to information sources, by time, volume and type, to avoid taking in too much.

My great personal discovery though – perhaps already widely known, but unrealised by myself – is that people are not looking for information, per se, and certainly not in the sense that they are looking for a body of knowledge on diverse issues that will keep them informed.

The subtle distinction here is that people don't want to be informed. They expose themselves to information sources, partly to be entertained but, in terms of the media and similar sources offering topical information (news) and opinion, the primary purpose is to seek reinforcement of an already pre-established world view.

Readers, therefore, will be looking for material presented in such a way, and of a nature, which accords with their prejudices. If they don't get what they want, they will go elsewhere, but once people have established a comfortable reading list – i.e., sources which keep them in their personal comfort zones - they will rarely stray. If, however, they are presented with material they don't want, or in a way which challenges their prejudices, they will also move on.

For the legacy media and other sites which deliver material by way of a business, for whom high circulation is essential, this means that the primary concern is to give the readers what they are looking for: reinforcement of their own prejudices.  They are not in the information business.

This, though, is not by any means the full extent of the analysis. The other great draw is "prestige", either inherent or acquired. Those sources which have this important property will be consulted, even when they irritate or annoy. Those that do not will be ignored by the majority. Quality, content and accuracy have nothing to do with this. The prestigious source can produce tosh and be believed, while the lowly source can be absolutely right, and have no impact at all.

Why this is at all relevant is precisely to do with the subject raised at the beginning of this piece – shale gas. Although this was one of the first UK political blogs to note its impact, having written a piece back in August 2008, many others have piled in since, and claimed the subject for their own.

But, while shale gas has been treated by many prestigious sources as the answer to all (or most of) our energy problems, the popularity of their pieces has nothing to do with the accuracy of their predictions. They retain their readership by telling people what they want to hear, rather than what actually is.

Of particular importance, though, is the failure of many of these pundits to understand the difference between "resource" and "reserve", the one being the potential and the other the amount recoverable. So far, we have estimates as to the resource, but absolutely no indications of the reserves.

Furthermore, we learn that Cuadrilla is only just embarking on flow rate tests, and even then specialist sources are extremely thin on the detail. Hundreds of such tests must be carried out before we get any sense on the scale of the reserves, and with such slight activity, it is going to be a long time before we have usable information.

Thus, we are told that initial job estimates for Britain's shale gas industry are probably overblown, with engineering firm AMEC slashing David Cameron's estimate from 74,000 to a range between 15,900 to 24,300 full-time equivalents during "peak construction".

Giving us some sort of timescale, Ken Cronin, spokesman for the United Kingdom Onshore Operators Group, conveys industry predictions that "peak construction" is unlikely to be achieved until after the mid-2020s. "The first commercial drilling should occur by the end of the decade with only the possibility of a significant ramping up within the following five or six years", he says.

There we have it. We are not really going to see things really taking off until the middle of next decade, and only then will we get some indications of the scale of the reserves.

Meanwhile, Royal Dutch Shell CEO Peter Voser is sceptical about the success of shale development, arguing that it will take decades before the revolution in the United States can be replicated elsewhere in the world. "This is a big hype at the moment", he says.

Then, despite the naďvety of Mr Cameron's EU regulation team, the EU is quite determined that the industry will be heavily regulated. This could have very significant effect on the viability of the industry, and the speed of development, especially as the Greens are determined to do all they can to shut the industry down.

This is where the naďvety of the EU deregulators really shows, for Queen Green Caroline Lucas is setting out the Green case: "the widespread use of shale gas is quite simply incompatible with the UK's international commitments to keep global warming below 2şC", she says.

And what so few of our "prestigious sources" realise is that the Greens have not only organised themselves at an EU level, but have built an international power base and a network of alliances which is in a position to block attempts to get shale gas into production. And make no mistake - that is their aim.

Nevertheless, in "information" terms, we will continue with the current situation. Those who wish to be told that shale gas is the modern miracle that will deliver us from rising energy costs will find plenty of prestigious sources that will reaffirm their beliefs, telling then what they want to hear.

Down in the weeds, though, it is a different story. But then, since we are able to select the stories that please us and ignore the reality, that doesn't matter. Bad news can be kept at bay as long as we sustain ourselves with the belief that a new dawn is just over the horizon.