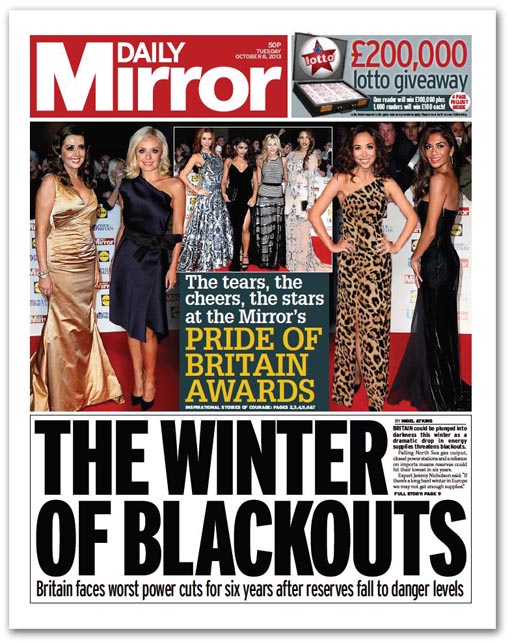 In July, the National Grid's forecast margin on electricity supplies for the winter was 22 GW. That was against a normal winter peak demand expectation of 55.1GW and a forecast generator capacity of 77.1GW.

However, in the event of a very severe winter, there is a 1 in 20 chance of a peak demand of 59.0GW. And, with median wind and zero net interconnector flow, it is possible that posted generation availability could fall to 58.8GW – a potential shortfall, on paper.

However, the contracted winter period STOR is 3.5GW, plus the system frequency response will be brought up to 1.9 GW. Then there are Maximum Generation Contracts in place for Winter 2013/14, providing up to 1GW of extra generation in an emergency – which is not recorded on the declared reserve. We thus have a "hidden reserve" of over 6GW, to cover a worst case scenario.

That, however, does not stop the legacy media, BBC included, claiming that the there is a risk of an electricity blackouts this winter. Yet the National Grid has specifically said that it does not expect a shortfall.

Chris Train, director of market operations at National Grid, said despite the series of power station closures since last year, it was still confident the market could meet demand, even in the event of another prolonged cold spell such as in March this year.

"As the system operator, we're never complacent. It's up to us to be ready to balance the system in real time. We believe we are ready and have the tools we need to play our part," he adds.

These "tools" include "inadequate system margin" warnings, which give generators advance warning of problems, enabling them to reschedule planned shut-downs and to bring mothballed gas plants back into use. Those give us another 4GW if necessary.
In short, there is no capacity shortfall this winter, and little likelihood of anything other than localised blackouts arising from the normal operational hazards.
Such is the determination of the media that we should have problems, though, that from the Mail to the Telegraph and the Daily Mirror, the newspapers are warning of blackouts, with ministers being questioned over non-existent risks. Bizarrely, the Mirror even goes so far as to post a lurid "Winter of Blackouts" on its front page, with this on offer as its story:


Britons will be praying for a mild winter as dwindling energy supplies threaten to hit lighting and heating. Experts fear the country could be plunged into darkness as reserves fall to half of what they were last year and warned prices could soar. The National Grid said it was keeping a close eye on gas and electricity levels but the drop means we are facing the biggest threat of blackouts since the winter of 2007/08.

We had something very similar in June, when computer modelling of worst-case scenarios by Ofgem gave us alarmist headlines about power cuts and electricity rationing. For the media, of course, facts do not matter. When they want it to, black equals white and a sufficiency of supply means that the lights are going to go out.
Nevertheless, there is something beyond comprehension going on here. This is the output of "mainstream journalists" whom, we are told, have "a powerful reputation for accuracy". Yet here we have, in black and white, the media herd telling us something which is not true - and, to judge from the comments, a goodly number of people who believe what they read..