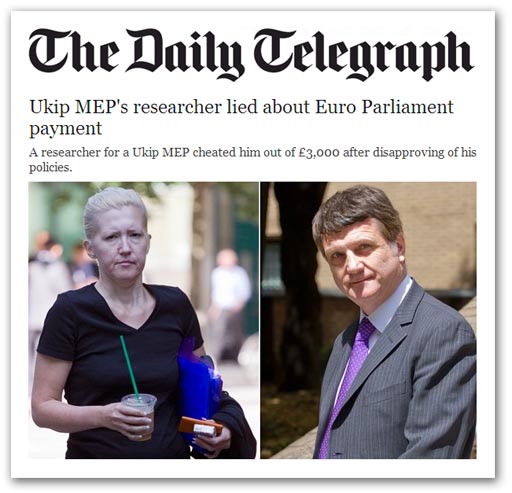 One does not wish to comment on the gullibility of a UKIP MEP who is cheated out of Ł3,000 after a member of staff complains she has not been paid her wages by the European Parliament. Suffice to say that, of the "services" in the EP, the payroll department is usually pretty slick, and it would have taken only a telephone call or an e-mail to check whether a payment had been made.

The Telegraph report, however, discloses that Mr Gerard Batten MEP had been hiring Jasna Badzak, 42, a Yugoslavian former asylum seeker, as a press officer and researcher, at the knock-down rate of Ł10,000 per annum. That is considerably less than half a recently qualified English-born researcher might accept for this type of work.

UKIP is the party, of course, which objects to immigrants coming to the UK and under-cutting local wage rates. One is thus reminded of party leader Roger Knapman, who in May 2006 was outed for hiring cheap Polish builders to do up his country mansion, keeping them in his attic and paying them half the rate of British workers.

Mr Farage is, of course, extremely voluble about such practices and Mr Batten, acting as chief whip for his boss, has also been quick to complain about the immigrant problem.

Mr Knapman's excuse for hiring cheap immigrant labour, was that his Polish workers were far better than their British equivalents. When it comes to research, though, it is tempting to suggest that you get what you pay for.

That may not be the issue here. The indications are that something far more tawdry is involved, and not all aspects of the Telegraph report hang together. There were, it seems, "issues" between the pair, and a long history. Relations were far from cordial between the MEP and his former staffer - who was a UKIP candidate in the 2010 general election.

Mz Badzak is not entirely without "form" in such matters. In 2008, she was Conservative chairman of the Harrow Road branch, in the North Westminster constituency, calling herself a "financial analyst" with a business Masters degree at the University of Westminster.
In the October of that year, a report told of the the entire branch jumping ship to UKIP "amid discrimination claims". "Former refugee Jasna Badzak", was cited as claiming that she had been told by a party agent that she could not progress in the Conservative Party because of her background.

"It is just jobs for the boys. Unfortunately, I did not go to private school. I did not go to Oxbridge. Well I have said no thank you – this is not the way to do things. People should be judged on their ability", Mz Badzak had declared. A London UKIP spokesman had then said that Mz Badzak had joined the party because of the Conservatives' "wavering stance on Europe and that the party had fallen out of touch with its voters".
By March 2010, things were looking very different and so much brighter. The UKIP website was applauding their candidate for pledging to claim absolutely no parliamentary expenses if she became an MP.

"In a stark contrast to the money-grabbers currently presiding over the House of Commons", UKIP's Jasna Badzak, "who fled to Britain seeking asylum from war-torn Serbia 17 years ago", had said that she would not claim an additional penny of taxpayer cash. And "in an astonishing show of generosity", the 37-year-old businesswoman had "promised to donate ten percent of her salary to the Help for Heroes charity".

Now, with the promise of the past all but forgotten, we see a glimpse of the other side of UKIP. And, even though a jury found Batten to be an innocent party in this case, neither he nor Badzak emerge with any great credit. Doubtless, this is not what UKIP supporters expected when they cast their votes.