Media: more nonsense from the Express 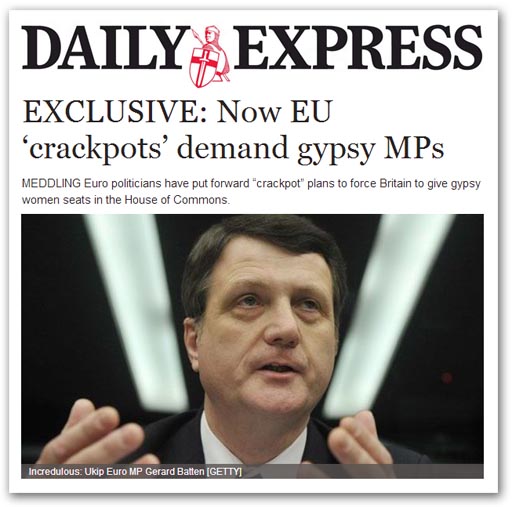 Courtesy of The Boiling Frog we see the latest of a long line of nonsense EU stories from the legacy media.

This one is an "exclusive" from the increasingly dire Express, which proclaims that "meddling Euro politicians have put forward 'crackpot' plans to force Britain to give gypsy women seats in the House of Commons".

TBF takes as his opening theme the widely known and quoted the phrase "never believe what you read in newspapers", noting how regularly the lesson it provides is ignored. This maxim, he says, is particularly true - doubly so in fact - when it comes to all matters EU.

In this particular case, TBF has in mind a particular blogger, and it is always a shame to see people take up uncritically what the legacy media claim. As a rule of thumb, one should never believe anything unless it has been independently verified.

As to the "crackpot plans", it was very easy and quick to ascertain that the paper was referring to an own initiative report, which, therefore, has no legislative status whatsoever. As TBF points out, it has about as much status as a Westminster Hall debate in our House of Commons. Nor indeed is there any reference in the report to a plan to "impose female gypsy candidates on the electorate and get them into Parliament", as is asserted in the Express story.

What is interesting, therefore, is the role of UKIP MEP Gerard Batten, who is quoted as saying: "This is the start of yet another piece of ideologically motivated crackpot legislation from the EU", adding that, "It is a treasure trove of politically correct nonsense, but it is also highly dangerous".

Batten goes on: " It will not have any impact on countries where the Roma live, such as Romania and Hungary, because they will simply ignore it. But if adopted, it'll put yet more legal obligations on countries such as Britain with generous benefits systems".

The point, of course, is that Gerard Batten has been an MEP since 2004 – over nine years – and it seems hardly conceivable that he could have survived all this time without knowing that an own initiative report had no legislative status. He surely must know that this is not "the start of yet another piece of ideologically motivated crackpot legislation from the EU", and that it will never be adopted.

Allowing that Batten does at least know this, however, opens him up to the more serious charge that he is quite deliberately attempting to mislead the public, allowing the Express newspaper to make statements which are demonstrably not true, with conclusions which are alarmist and misleading.

But then this is the MEP who has some bizarre ideas about Article 50, so perhaps we should allow that Mr Batten, after all this time, does not understand how the EU legislative system works.

What is saddening about all this, though, is the opportunity missed. Elsewhere on the Express we see a very superficial rendition of the EU flight rules story, yet a little bit of research could have turned it into a powerful blast against the system. And in that, UKIP should be providing the lead instead of, as is Batten currently, spreading disinformation.

Some people, however, may consider that it doesn't matter. This is a propaganda war and, as long as we keep attacking the EU, the purpose is served. This is not a view Booker and I share, though. We have always taken the view that attacks must be based on meticulous research, the strength of the attack depending entirely on its credibility.

Few people now would (or should) now trust the Express, so lame and ill-researched are its stories – and one has also to remark that its choice of sources does not add to its credibility. But we can't afford to weaken our attack in this way. We have little enough resource as it is, without wasting effort in such an egregious fashion.