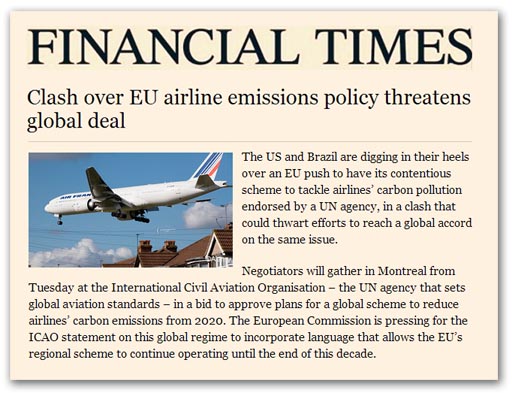 There are a lot of people in this world who would have difficulty in answering the question, "what is Canada for?" For the next two weeks, however, there is a partial answer as the Canadian city of Montreal hosts the 38th Assembly of the International Civil Aviation Organisation, the UN agency that sets global aviation standards.
This gives Canada a reason for existing, as host to one of the hubs of global governance which increasingly dominates the way rules are created for us mere mortals.

Top of the agenda for this component of the World Order, which formally came into being on 4 April 1947, is an arcane spat over carbon emission standards, and the global imposition of an airline carbon tax, the details of which are so tedious that, by comparison, rooting out your eyeballs with knitting needles would be a pleasurable experience.

Of great interest to this blog, though, is the drama provides yet more evidence of the hierarchical nature of world governance, where rules are set at global level and then handed down the line to be implemented, at regional and then national level.

In this context, we even have an official designation for the "little Europe" of the European Union, which is known as a Regional Integration Organisation (RIO). And, although the EU has an official representative to the ICAO, and has observer status, adherence to the founding Chicago Convention is open only to states. EU membership would require an amendment of the Convention, which requires a two-thirds majority vote in the Assembly to be adopted. And so far, that hasn't happened.

As a result, the EU has reached the limits of its power. Being imbued for its own reasons with the global warming doctrines, it has sought to impose upon all airlines visiting the territories of its member states its own form of carbon tax. Such attempts, though, have encountered tax sovereignty issues, and have been blocked by non-EU nations, with the US and Brazil high up on the list of refusniks.

This means that the issue has been shoved "upstairs", so to speak, to be settled by the upstream ICAO, where national delegates will decide whether to approve a global scheme aimed at reducing airline CO2 emissions, starting from the year2020.

As a supplicant to IACO, without voting rights, the European Commission is pleading for permission its own regional scheme until the end of the decade, when the global scheme takes over. And, in the absence of agreement, the possibility of trade war looms, if the EU continues its plans and affected nations demur.

In what might be seen as a cynical but entirely accurate comment, though, Jos Delbeke, director general for climate at the European Commission, suggests that, "There are some bits and pieces in the text that made everybody unhappy, so it may be not far away from an ideal compromise". This reflects the basic requirement for a successful international agreement – that everybody should be unhappy, which means that no one has gained an advantage.

In due course, no doubt, an agreement of sorts will be reached, but it will be made by the member states at global level who will agree to allow EU action. That, in terms of the three strategic objectives of ICAO, enhancing global civil aviation safety and security, and environmental protection and sustainable development of air transport, is where the power really lies.

When Mr Cameron says we need to have a seat at the top table, therefore, it is to Montreal that we must go when discussing civil aviation, where the UK is a member of the 36-member governing council. There, it regulates a $708-billion global industry, greater in value than many countries, handling a collective budget considerably larger than the EU.
A mere Regional Integration Organisation, such as the European Union, is there only to do as it is told by the global players, which just happen to include Norway.