UKIP: Bloom – it ain't over yet 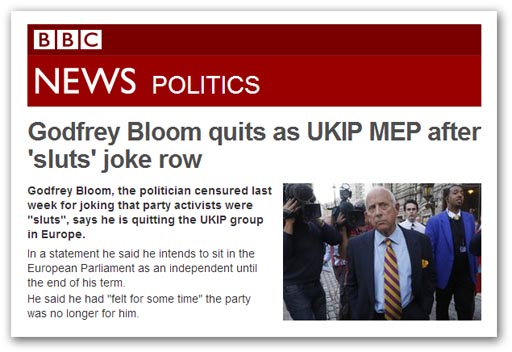 Not waiting for the disciplinary hearing to confirm his suspension as a UKIP MEP, the oaf Bloom has taken the coward's way out and formally resigned from the UKIP group in the European Parliament.

Intending, he says, to sit as an "independent", that means he takes with him the tens of thousands paid by the EP as his group allocation, and he also takes outside UKIP his expenses and his (rather dubious) services as an MEP – acting as a "bed blocker" for the nine months remaining of his term.

Without a trace of irony, Bloom says he will retain his party membership but would not be bound to vote with the party. Bearing in mind that he rarely votes at all, the party will hardly notice the difference. The net effect of his departure, therefore, will be to deprive UKIP's coffers of the cash equivalent of well over Ł100,000.

Thus, even in making his grand gesture, Bloom can't do the decent thing.  He continues to draw his Ł71,000 salary, and his daily living allowance when he does go abroad, plus personal expenses and his Ł217,000 office allowance. He will also walk away with a full pension if he doesn't get re-elected (which now looks likely).

Bloom, who in any event gained the party list nomination in 2004 in breach of party rules, now says he had "felt for some time that the 'New UKIP' is not really right for me, any more, perhaps, than New Labour was right for the Dennis 'The beast of Bolsover' Skinner".

In truth, the man always was a throwback, representing the loutish tendency in UKIP that the party could well do without. But it should never be forgotten that Bloom was always Farage's man. He brought him back into the party and conspired with then party chairman David Lott to allow Bloom to keep his 2004 MEP nomination, blocking an internal inquiry that would have exposed massive malpractice in the selection process.

Thus, for this current imbroglio, the party has only Farage's poor judgement and self-interest to blame, another of his missteps which has now seen the loss of five of his 13 MEPs elected in 2009 – a 38 percent loss rate. As a measure of his leadership, that says a great deal.

Nor is Farage out of the woods yet. Bloom's decision to remain in the party, while resigning the party whip, represents a direct challenge to Farage as leader. He can hardly allow this renegade to stay a party member, yet remain outside the control of the parliamentary party.

This puts Farage in the awkward position of having to swallow his pride, and loss of authority, or seek Bloom's ejection from the party. Either way, that is more embarrassment for both leader and party, as the oaf distracts attention from the party's aims and its political activities.

But then, once Farage gained control of the party and took over the MEP selection process (as he did, with some exceptions in 2004 and again in 2009 - not forgetting that Bloom "passed" the selection procedure this time as well), there was always going to be trouble.
Perhaps now Farage will hark the words of the bard: "When sorrows come, they come not single spies but in battalions". This ain't over yet. The oaf has yet to be ridden out of town.

UPDATE: It looks as if Farage has bottled out. He tells the BBC he doesn't want to see the oaf kicked out of the party, insisting he had not crossed the lines of racism or extremism. He added that he was "sorry" that events had reached this stage. "He's been with us for 15 years, he's sat in the European Parliament since 2004, he absolutely 100 percent believes in everything UKIP stands for and he's been a good, loyal MEP for us. It's a sorry state of affairs".

So, Farage's drinking pal gets to call the shots after all. This is a humiliating climb-down for Farage, who has been completely outmanoeuvred by Bloom. The man has evaded a party hearing and has now effectively dictated the terms on which he will stay a member of the party.

And, to demonstrate that he has learned nothing from his experience, he tells the BBC he is now thinking of taking up shooting, adding that "Michael Crick might be the first cartridge, if it isn't my own party chairman". One should, I suppose, be comforted by Farage's statement: "All the things Godfrey has said have not been meant in malice ... nearly everything he has said has been meant as a joke".