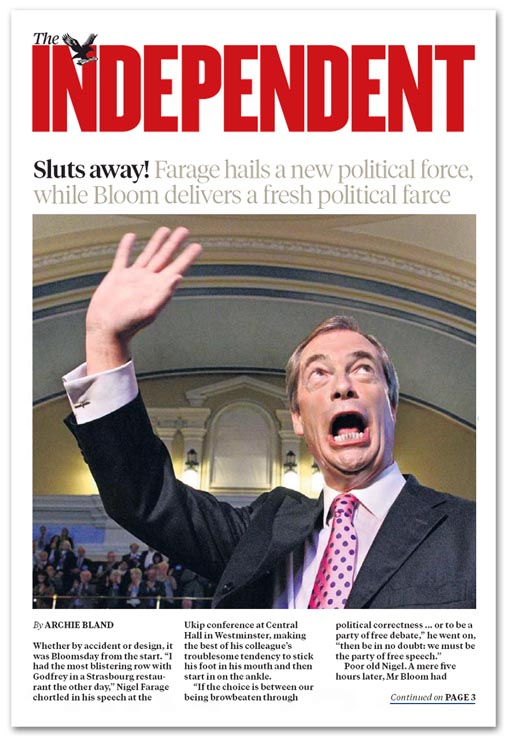 "Sluts away! Farage hails a new political force, while Bloom delivers a fresh political farce", exults the Independent on the front page of its print edition.

Copy by Archie Bland tells us, whether by accident or design, it was Bloomsday from the start. "I had the most blistering row with Godfrey in a Strasbourg restaurant the other day", Nigel Farage chortled in his speech at the UKIP conference at Central Hall in Westminster, making the best of his colleague's troublesome tendency to stick his foot in his mouth and then start in on the ankle.

"If the choice is between our being browbeaten through political correctness … or to be a party of free debate", he went on, "then be in no doubt: we must be the party of free speech".

Poor old Nigel. A mere five hours later, Mr Bloom had forced him to take a different view. This time, Farage said, "Godfrey has gone beyond the pale … and we have no option but to remove the whip". What happened in the interim was as brisk a guide to political hara-kiri as you are likely to witness …

That from the Independent records how, on the first day of the UKIP conference when the party should have been the story, the oaf Bloom had allowed his behaviour once again to dominate the headlines. Yet, against the ghastly Crick and Channel 4, he has been arguing – and not entirely without justice - that his comments were meant as a joke.

But, as Autonomous Mind points out, the penny has dropped for some people about the kind of person Bloom is. And whether the oaf thought he was joking is, as one of our forum members observes, somewhat irrelevant:

If you aspire to be any sort of serious credible force as a political party, campaign discipline is vital which means giving your opponents nothing to feed on and he failed hugely with this episode - again! It's clear from that clip that the whole thing was some form of sting operation by an agitprop merchant and Bloom walked right into it. Given the stitch-up about Farage in the media, Bloom should have been focussed on keeping his nose clean - yet he gave his opponents an open goal once again.

This is naive in the extreme by Bloom, joke or not. He has to expect the media will be on the hunt for him and should be keeping his eyes open. Right now, nowhere is private. As we have also seen by the revelations of Gordon Brown's former spin doctor, modern politics seems to be a black art in which every single comment and secret is tucked away and turned into currency or weapons depending on whether that person is your friend or enemy and even those friends and enemy status can be transient where ambition is concerned.

As legacy media now records, some with undisguised glee, events have now forced Farage to instruct Bloom to consider his position over his "selfish and stupid" comments, having accused him of "destroying" the conference. Later, we heard that the party chairman had removed the whip from Bloom, "pending a formal disciplinary hearing", leaving behind a train wreck as far as the media coverage goes.  For ever more, this will be Bloom's "slut" conference.

One might recall that on 8 August, I wrote that, "Farage should … get rid of Bloom", adding: "If he can't bring himself to ditch a fellow drunkard, he should tender his own resignation".

However, it was his critics who took the shitstorm for daring to point out that his behaviour was beyond the pale. The oaf Bloom stayed, attracting soft-focus pieces from the legacy media and hero worship from his supporters.

This is a sentiment shared by The Boiling Frog. "I don't care about justifications of whether Bloom's comments have been taken out of context nor whether it's just a crap joke", he writes: "they are simply unacceptable and unfit for a party wishing to take itself seriously for MPs elected to Parliament".

I am not going to pretend that I am surprised by such events. They are a direct and predictable effect of the poor judgement of Mr Farage. Bloom should have been removed earlier. And if my advice had been heeded, Farage wouldn't now be whingeing about Bloom's, "selfish and stupid" comments and accusing him of "destroying" the conference.
Still less would Farage have been on this morning's BBC Radio 4's Today programme, complaining: "What Mr Bloom's antics have done is to distract from some of the serious things we were saying yesterday. So I'm feeling pretty hacked off about it."

But Bloom was always Farage's man. Drinking partners of old, Farage brought him back into the party after he had left, Farage presided over the rigging of the selection procedure to get his pal elected as an MEP, and Farage has stood by him through thick and thin. The pair have even shared a flat in Brussels while Bloom has gone on his foul-mouthed rampage, drinking and whoring with little evidence of restraint, only now to derail the conference.

As such, all I can say is that this is a self-inflicted wound. Farage brought this train wreck on himself and his party. Not much more need be said.