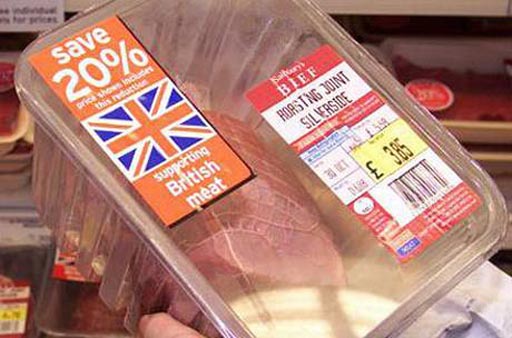 It was in March 2000 that Stephen O'Brien, Conservative MP for Eddisbury, sought to introduce a food labelling Bill which would require country of origin to be disclosed on the labelling.

After all, said O'Brien, "We produce some of the best food in the world to exacting quality, hygiene and animal welfare standards. Our industry should get the credit and the premium for it. Consumers need to know when they buy food labelled as British, it is British food produced in Britain".

This provoked a haughty response from the Minister of State, Ministry of Agriculture, Fisheries and Food, then Joyce Quin, who declared the Bill's proposals "contrary to European Union law".

Later in the debate during which the Bill was to be talked out, never again to see the light of day, she told the House that the substance of the Bill could result in European legal action being pursued. "It is important for us to be consistent", she said, "and the Government have rightly said that we obey European laws to which we have agreed".

The then current EU law was confused and confusing, but the thrust of policy was to suppress national (although not regional) identities. The aim was to prevent discrimination on the grounds of nationality and also to foster a European identity, facilitated by laws permitting the use of the designation "EU origin", which also served to conceal the origin of the food.

That is clearly the ethos which UKIP believes to be prevailing, in its extraordinarily ill-informed piece which has Paul Nuttall, deputy leader, declaring: "The EU is has (sic) launched this horrible offensive against national identity and scrapping appearances of the national flag is a way of doing that". 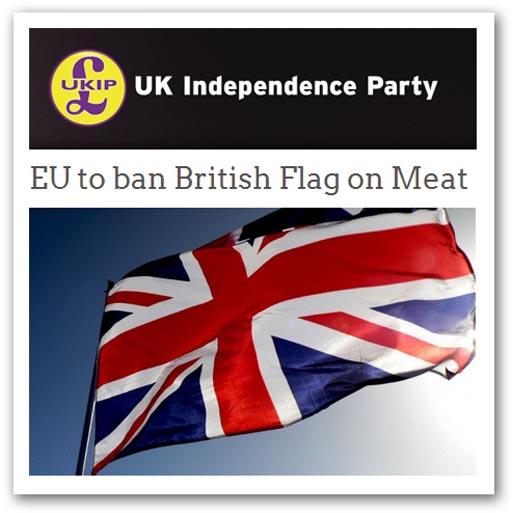 What they have missed is what amounts to a complete reversal of EU policy, the seeds of which were already sown well before Mr O'Brien's Bill but which is only now coming to fruition, under the acronym COOL (Country of Origin Labelling). And the driver of this "revolution" stems mainly from two sources working in unison, the World Trade Organisation (WTO) and our old friend Codex Alimentarius.

Illustrating the invisible nature of our global governance, however, we see in the Codex General Standard for the Labelling of Prepackaged Foods (Codex Stan 1-1985), which was last revised in 1991, the requirement that "the country of origin of the food shall be declared if its omission would mislead or deceive the consumer".

Then, in the very latest Food labelling requirements from the EU, Regulation (EU) No 1169/2011, coming into force on 13 December this year, we see the requirement in Article 29: "The indication of the country of origin or of the place of provenance of a food should be provided whenever its absence is likely to mislead consumers as to the true country of origin or place of provenance of that product".

Without any acknowledgement or recognition to that effect, the EU is implementing to the letter the Codex General Standard. Regulation 1169/2011 may be an EU law but the origin lies with Codex and, beyond that, the FAO in Rome, which is part of the UN structure. And crucially, the requirement does not appear in the preceding legislation, Directive 2000/13/EC, which has been replaced by 1169/2011.

Overlaying Codex, however, are WTO rules and, for these, we have to go back to the Agreement on Rules of Origin (WTO-GATT 1994), annexed to the final act signed by the European Community in Marrakesh on 15 April 1994 and approved on its behalf by Council Decision 94/800/EC of 22 December 1994. The text of the agreement is also on the WTO website.

It is a measure of the glacial speed of the workings of international bodies that only now is this agreement, nearly twenty years down the line, beginning to take effect. But then, the main provision of the agreement was to agree the general aim of harmonising rules of origin among all WTO members, to which effect, a number of committees were set up to support what was known as the "harmonisation work programme".

Although the EU seems as reluctant to admit the involvement of international bodies in its affairs, as is our national government when it comes to EU involvement, the Commission website does acknowledge the role of the agreement. Its main objective, the Commission says, of this Agreement is to harmonise non-preferential rules of origin so as to ensure that the same criteria are applied by all WTO members, irrespective of the purpose of their application.

Pending this harmonisation and during a transition period – which still goes on - WTO members must ensure that the conditions for determining origin are clearly defined and that the rules of origin do not create restrictive, distorting or disruptive effects on international trade.

While the negotiation continue, with Codex also considering further moves (see pg. 12), we have seen the mighty United States fall foul of these rules. The US government has thus had to change its own laws to meet WTO requirements.

What then comes over very clearly from current EU documentation is the need for the EU to avoid conflict - to be WTO compliant – undoubtedly influenced by the US experience, a view endorsed by the World Customs Organisation (WCO). This is a partner to the WTO in the harmonisation process.

Obscure all this may be, but the resultant situation is clear. Although it has some flexibility in defining detailed rules, the EU is not a free agent when it comes to defining food labelling rules. It must – and does – defer to three bodies, Codex Alimentarius, the WTO and the WCO. These bodies set the legal and operating frameworks and, over time, will set ever more detailed rules.

With that, the policy direction, since 1991, has been taking us ever closer to open disclosure of country of origin. Had he been more aware of the international situation, even in 2000, Stephen O'Brien could have argued to Joyce Quin that the EU was in breach of international rules, and his Bill should have prevailed. It was more in tune with international standards than was the EU.

Now, more than a decade later, EU policy has undergone a COOL revolution, and anyone knowledgeable of the international rules knows that the EU is no longer in a position to ban national indications. On that basis alone, without even researching the Express story, commentators should have been cautious about what they accepted as true.

What really does emerge from this affair, though, is the complexity of our modern government, where obscure bodies create invisible laws, the origins of which are almost completely unknown. Despite that, one might observe that it would be useful for a political party which seeks to change the system to know something of how it actually works.