Media: flying the flag for dishonesty 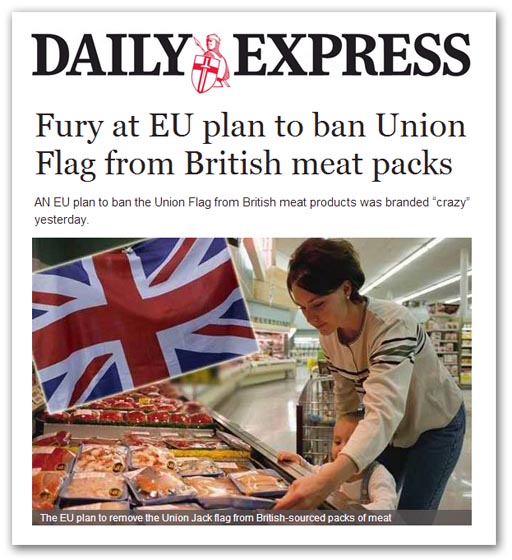 Several hours today were expended after Booker received a call from a major national newspaper asking him to write a "robust" commentary on the "plan" by the EU Commission to ban the Union Flag from British meat packs. That was the story as it appeared in the Daily Express today (illustrated), which then spread like wildlfire to the Mail, the Daily Telegraph and even the normally reliable Grocer.
Always happy to earn a buck or two in the form of a research fee, I set about looking into the background to the "plan", while Booker cracked on with writing the story – only then to come to a grinding halt. The EU "plan" identified by the Express does not exist. There simply is no substance whatsoever to the story.

Inevitably, this is a complex issue. We are dealing on the one hand with amendments to Council Regulation 1760/2000, which deals with the procedures for voluntary beef labelling, on which Defra is consulting and which refers to deletion of the existing voluntary labelling provisions.

Crucially, we are also dealing with Regulation (EU) No 1169/2011 which comes into force on 13 December this year, setting out "mandatory indications of country of origin or place of provenance for unprocessed pre-packed meat of pigs, poultry, sheep and goats". And it is this, as was flagged up in May of this year, that has set this particular hare running.

The Regulation requires the Commission to submit a report to the European Parliament and the Council by 13 December 2013 on the possibility of extending mandatory indication of country of origin or place of provenance to meat used as an ingredient.

The report, we are told, "will need to take into account the need of the consumer to be informed, the feasibility of providing the mandatory indication of the country of origin or place of provenance as well as a cost and benefit analysis of such measures along with an analysis of the legal impact and impact on international trade".

And what brings this into play is that, the Commission committed itself to deliver this report in autumn 2013. Based on the report, the Commission then said it would decide on the appropriate course of action. And, as it is now autumn, the Commission has produced a draft report setting out its options (as yet to be published). These have been misinterpreted as definitive proposals.

The gist of what has been going on can be deduced from the Commission website, which also refers to commissioning an external report studying "the application of rules on voluntary origin labelling of foods", together with a roadmap which records the state of play, along with a Q&A document.

Further insight can be gained from the 91-page impact assessment, which explores the historical and political background to the regulations, with a clear exposition on the use of what is termed "country of origin" labelling.

Not anywhere in this documentation or from any official sources could one find any plans, extant or proposed, which would ban or have the effect of banning the use of the Union Flag on meat packaging. In fact, the general direction of policy initiatives is towards increasing the amount of information on country of origin.

Had it checked the documentation, the Express could have found this out. But newspapers don't work this way – they don't research the documentation and wouldn't know where to look even if they set out to do so. Instead, their journalists telephone press officers and talk to other hapless sources, in order to construct their stories.

In this case, the Express contacted the Commission representation in the UK whence it was told the story was not true. Now one doesn't necessarily believe the Commission, but – as I have already independently ascertained – the information is there to back up the claim. The Commission is right - the story isn't true.

But, from the school of never letting facts spoil a good story, the Express went ahead and published - something it already knew was not true. Then, in a typical rush of coprophagia, it was followed by the other newspapers, which did not even contact the Commission.

Then, UKIP piles in, its (current) lead story telling us: "EU to ban British Flag on Meat". Paul Nuttall, deputy leader - displaying his profound ignorance - chirps: "The EU is has (sic) launched this horrible offensive against national identity and scrapping appearances of the national flag is a way of doing that".

Needless to say, Booker and I are currently unemployed. Running with the herd would have been a nice little earner, but it would also have been dishonest. We advised our national newspaper that there was no substance to the story, and that was the end of any prospect of a commission.

Of all the papers that have since been told that the story is untrue, none are likely to issue a retraction or apologise for misleading their readers. And UKIP, always good at spreading misinformation, has also fallen for the flower bulb story, even though there is far more to it than they tells us.

Between ignorance and dishonesty, though, there is nothing much to chose. The end result is the same. But once again we have it brought home to us that nothing in the media can be believed, unless it is either self-evidently true or has been independently verified.