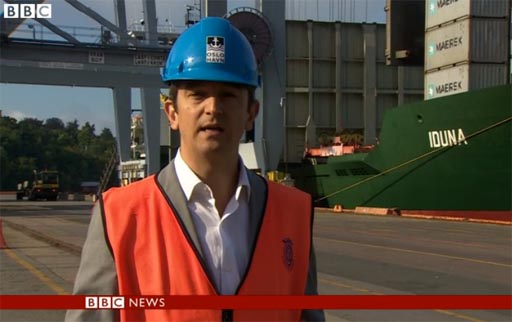 Matthew Price, the egregious BBC "Europe" correspondent who knows so little of how the EU works, has been to Norway ahead of the general election and is using this as an opportunity to pose the question: "Would Norway's special EU arrangement work for Britain?"

Predictably, in his short film, Price starts with fishing, telling us that the industry is a big part of the Norwegian economy and, being outside the EU, they control all the waters off their coast, not Brussels. And, says Price, "that's how they'd like to keep it".

He then interviews Kurt Allan Hansen, a manager of the seafood firm, Fjordfisk, who confirms this thesis. Against a fishing harbour background, Hansen tells us: "We don't want to send it away or be run by some government in Brussels who says you can fish only so much. We want [the] Norwegian fishery to be just what it is".

Price, of course, can't leave it there. "But one word sums up why they also need the EU: exports", he says. "The economy is dependent on them, and most go to Europe". Thus, we are told: "So when the voters here twice rejected joining the Union, Norway decided to join the European Economic Area. It makes them part of the EU's Single Market".

"But having access to this vital export market comes with a cost", Price now tells us", dolled up in blue hard hat and hi-viz waistcoat, against the background of a container depot. "Norway has to obey the trading rules of the European Union,. And yet, unlike the 28 member countries that make up the EU, it has no say in what those rules actually are. They are, literally, imposed by Brussels".

Therein lies the lie – naked, unadorned and unchanging. Not for the BBC is there any concession to the truth. The mantra must be repeated again and again, reinforcing the europhile propaganda.

To cement in the lie, we cut to a close-up of manufacturing plant making mattress springs. "Springs", declares Price. "for Norwegian mattresses exported to Germany. Being part of the EU's Sngle Market speeds things up for business here, but the manager isn't convinced the current relationship will benefit them forever".

Thus we cut to Jon-Erlend Alstad, CEO of Ekornes Beds, who obligingly tells Mr Price: "Norway is in a situation today where we have to adapt. We have to adapt to what others decide for us. I think long term – it's not a problem today – but long term, it's a danger".

"But for now", says Price, "the vast majority don't want to join the EU. There's an election on here but Europe simply doesn't feature". This, of course, does not suit Price, so he takes us to the Conservative Party, the party most in favour of EU membership and one to which the BBC always refers when it wants a Norwegian-sourced political comment about EU membership.

"At Conservative Party headquarters, they're expecting to win", Price intones. "so does their leader thin Norway's special EU relationship could work for Britain?" The answer comes directly from Erna Solberg, perhaps on the Monday coming to garner enough votes to be able to lead a coalition government.

"We are a small country", Solberg says, "so we are used to larger countries impacting on us quite strongly, and know that we can't make these, em … Well a small country like Norway will not change all the regulations around it. I slightly believe that the British view of themselves is a little bit different from the Norwegian ones".

Here, we get absolutely no hint that this is a partisan political view from a party which, as Anne Tvinnereim explains, is trying to protect its long-term political position, and need to keep the UK locked into EU membership. Instead, Price takes us back to the fishing scene and tells us, "here then, they feel at peace with their EU arrangement, but works for them wouldn't necessarily work for anyone else".

With that, the film clip finishes but, keen to hammer in the lie, Price tells us in the website that the country contributes about €240 million annually to the EU in order to access the single market, yet has no seat at the meetings where EU decisions are made.

The money claim is yet another lie. Look at the official Norwegian Government website on EU financial contributions and also their leaflet on the EU. We actually see that the contribution is not just to the Single Market, but to the EU "programme budget". And the programmes, with agency funding, ran to €207 million in 2011, accounting for 90 percent of the Norwegian contribution.

EEA costs are actually paid through EFTA, for which the the 2013 budget is €6,181,329. Norway's contribution to that sum isn't specified, but it is likely to be most of it (with Switzerland not being a member of the EEA), say about €6 million. That is the actual cost of the Single Market to Norway.

One suspects that the reason the BBC feels it necessary to lie so freely, by act and default, is only partly because of its inherent pro-EU bias. In part, it may not even be lying. Looking at Price's track record, ignorance must also play a part.

But the fact that the BBC always goes to Conservative politicians is a give away. They could not help but know that this party is pro-EU – they have been told, and other Norwegian parties have asked to be interviewed. But, as in so many other instances, if you do not tell the BBC what it wants to hear, you don't get heard.