World governance: a play in our favour 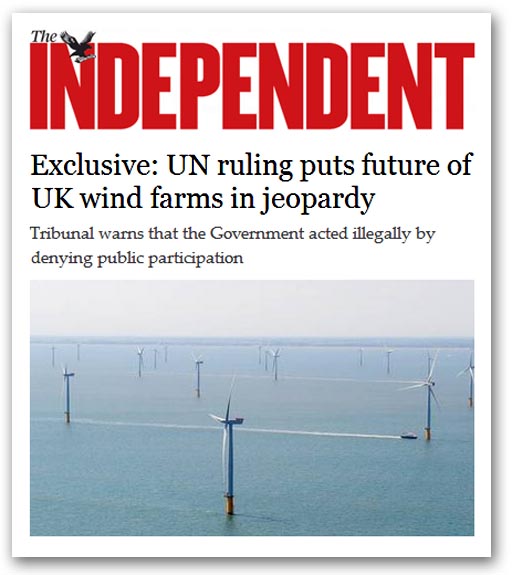 Regular readers of this blog are at an advantage here, as they will have already met UNECE (United Nations Economic Commission Europe) and will be familiar with the concept of world governance, without the conspiratorial overtones.

And here we have world governance in all its glory, acting for once in our favour via the Aarhus Convention, or more formally the UNECE Convention on Access to Information, Public Participation in Decision-making and Access to Justice in Environmental Matters.

The Convention was adopted on 25th June 1998 in the Danish city of Aarhus and entered into force on 30 October 2001. The UK ratified the convention in February 2005. The EU is a Party to the Convention since May 2005 and in 2003 two Directives concerning the first and second "pillars" of the Aarhus Convention were adopted; they were to be implemented in the national law of the EU Member States by 14 February and 25 June 2005 respectively.

Thus, we have yet another example of the EU implementing law which is based on higher-level international agreements. Norway, incidentally, is a Party – another example of "fax law", only with the Norwegians faxing the Commission to tell them to get on producing the necessary law to implement the Convention.

This Convention, we are told, it "goes to the heart of the relationship between people and governments". It is not only an environmental agreement, it is also a Convention about government accountability, transparency and responsiveness.

For those that are interested, the full text is here and we're actually talking about Article 7, which requires each signatory (party) to make "appropriate practical and/or other provisions for the public to participate during the preparation of plans and programmes relating to the environment, within a transparent and fair framework, having provided the necessary information to the public".

This is where the Independent comes in, with an "exclusive" story, telling us that the "compliance committee" set up under Annex II of the Convention has ruled that the UK Government has acted in breach of the Art 7 by denying the public decision-making powers over their approval and the "necessary information" over the benefits or adverse effects of wind farms.

Plans for future wind farms in Britain could be in jeopardy, says the paper, as the ruling calls into question the legal validity of any further planning consent for all future wind-farm developments based on current policy, both onshore and offshore.

The compliance committee has also recommended that the UK must in the future submit all plans and programmes similar in nature to the National Renewable Energy Action Plan (NREAP) to public participation, as required by Article 7.

The controversial decision will come as a blow for the Coalition's wind-power policy, which is already coming under attack from campaigners who want developments stopped because of medical evidence showing that the noise from turbines is having a serious impact on public health as well as damaging the environment.

Therein lies a huge and delightful irony and the Aarhus Convention is hailed by the Greens giving them the potential to challenge all manner of government decisions. The former secretary to the convention was Jeremy Wates, now supreme Fuhrer of the EEB, lording it in Brussels. The whole thing stemmed from Rio, and was the brainchild of the Green NGOs, led by the EEB.

And here it is, in a case brought by Christine Metcalfe, 69, a community councillor from Argyll who lodged the complaint with UNECE, challenging a flagship Green policy.

Metcalfe made the legal challenge on behalf of the Avich and Kilchrenan Community Council at the Committee Hearing in Geneva last December. She and the AKCC decided to take action after their experience of dealing with the building of the local Carraig Gheal wind farm and problems surrounding the access route, an area of great natural beauty.

The retired councillor said she was "relieved" by the decision. "We were criticised by some for making this challenge but this result absolves us of any possible accusations of wrong-doing", she said. "The Government needs to do more than just give ordinary people the right to comment on planning applications; they deserve to be given all the facts".

She claimed the UK's renewables policies have been designed in such a way that they have denied the public the right to be informed about, or to ascertain, the alleged benefits in reducing CO2 and harmful emissions from wind power, or the negative effects of wind power on health, the environment and the economy.

Legal experts, according to the Independent, confirm that the ruling is a "game-changer" for future wind-turbine developments in the UK.

Says David Hart, QC, an environmental lawyer, "This ruling means that consents and permissions for further wind-farm developments in Scotland and the UK are liable to challenge on the grounds that the necessary policy preliminaries have not been complied with, and that, in effect, the public has been denied the chance to consider and contribute to the NREAP".

Needless to say, the wind industry is quick off the mark with damage limitation. A Renewable UK spokeswoman says, "this is not going to affect projects on the ground." Meanwhile, DECC is "considering its response".

Whatever else, this is a great victory for world governance, and therefore a mixed blessing for nationalists. An international body has sat in judgement on the UK, reached down and told our Government it is wrong. But it wasn't the EU – it was UNECE, rule by Geneva rather than Brussels, using an instrument devised by the Greens. Should we rejoice?