Booker: the location of power 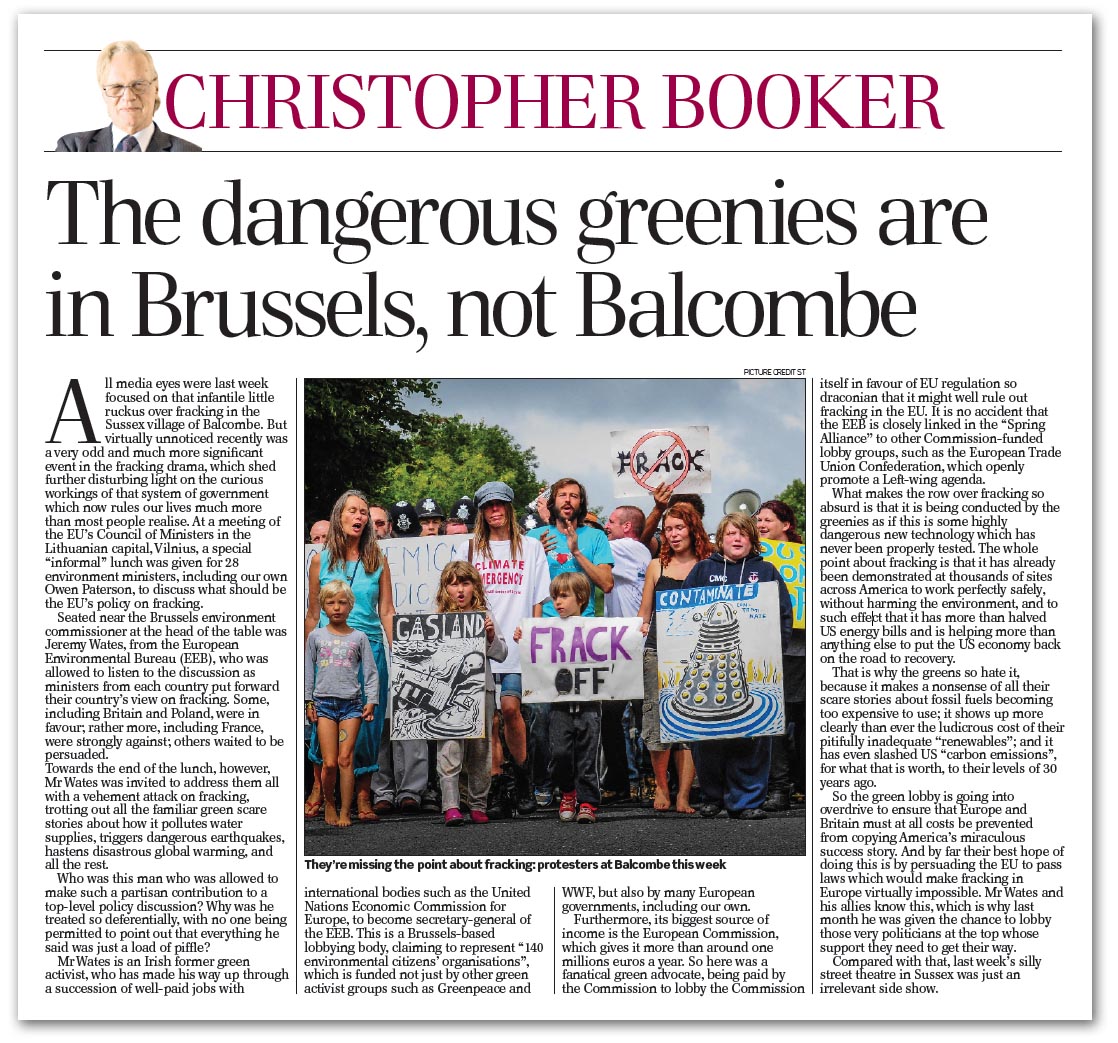 Right on cue, Booker is running a story in his column on the European Environmental Bureau that we ran earlier this week.

Although some of the commentariat have already fallen into the trap of treating this as yet another story about fracking, it is not. As indicated by the title: "The dangerous greenies are in Brussels, not Balcombe", this is about power or, more specifically, the location of the power centres in Green politics.
And so does Booker's sub-heading tell us that, "The real threat to fracking took place at a meeting of the EU's Council of Ministers with a presentation by Jeremy Wates".

It really is quite remarkable how so much media energy, and the serried ranks of the commentariat were last week focused on that infantile little ruckus over fracking in the Sussex village of Balcombe. But virtually unnoticed recently was a very odd and much more significant event in the fracking drama, which shed further disturbing light on the curious workings of that system of government which now rules our lives much more than most people realise.

It did actually get a brief outing in the Spectator but the story there was so low-key and lacking in detail that it was hardly noticed. Nonetheless, we did get to know that, at a meeting of the EU's Council of Ministers in the Lithuanian capital, Vilnius, a special "informal" lunch was given for 28 environment ministers, including our own Owen Paterson, to discuss what should be the EU's policy on fracking.

Seated near the Brussels environment commissioner at the head of the table, as Booker now tells us, was Jeremy Wates, from the European Environmental Bureau (EEB).

And in a remarkable demonstration of where power really lies, he was allowed to listen to the discussion as ministers from each country put forward their country's view on fracking. Some, including Britain and Poland, were in favour; rather more, including France, were strongly against; others waited to be persuaded.

Then, towards the end of the lunch, Mr Wates was invited to address them all with a vehement attack on fracking, trotting out all the familiar green scare stories about how it pollutes water supplies, triggers dangerous earthquakes, hastens disastrous global warming, and all the rest.

Booker puts some key questions: Who was this man who was allowed to make such a partisan contribution to a top-level policy discussion? Why was he treated so deferentially, with no one being permitted to point out that everything he said was just a load of piffle?

Jeremy Wates, it turns out, is an Irish former green activist, who has made his way up through a succession of well-paid jobs with international bodies such as the United Nations Economic Commission for Europe, to become secretary-general of the EEB.

This is a Brussels-based lobbying body, claiming to represent "140 environmental citizens' organisations", which is funded not just by other green activist groups such as Greenpeace and WWF, but also by many European governments, including our own.

Furthermore, its biggest source of income is the European Commission, which gives it around one million euros a year. So here was a fanatical green advocate, being paid by the Commission to lobby the Commission itself in favour of EU regulation so draconian that it might well rule out fracking in the EU.

It is no accident that the EEB is closely linked in the "Spring Alliance" to other Commission-funded lobby groups, such as the European Trade Union Confederation, which openly promote a Left-wing agenda.

What makes the row over fracking so absurd is that it is being conducted by the greenies as if this is some highly dangerous new technology which has never been properly tested.

The whole point about fracking is that it has already been demonstrated at thousands of sites across America to work perfectly safely, without harming the environment, and to such effect that it has more than halved US energy bills and is helping more than anything else to put the US economy back on the road to recovery.

That is why the greens so hate it, because it makes a nonsense of all their scare stories about fossil fuels becoming too expensive to use; it shows up more clearly than ever the ludicrous cost of their pitifully inadequate "renewables"; and it has even slashed US "carbon emissions", for what that is worth, to their levels of 30 years ago.

So the green lobby is going into overdrive to ensure that Europe and Britain must at all costs be prevented from copying America's miraculous success story. And by far their best hope of doing this is by persuading the EU to pass laws which would make fracking in Europe virtually impossible.

Mr Wates and his allies know this, which is why last month he was given the chance to lobby those very politicians at the top whose support they need to get their way.