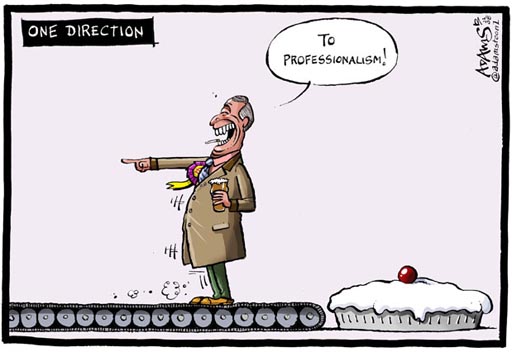 To no-one's very great surprise, the UKIP saga has continued running, with the BBC and others picking up on the criticisms aired by Will Gilpin, the recently departed chief executive. The thoroughly unprofessional Mr Farage is well in evidence, with the BBC headline telling us that he has too much power in UKIP.

By any measure, therefore, Farage's response to Gilpin is bizarre. Instead of retrenching, and even showing some signs of remorse, he comes storming back, telling the Telegraph that he will take a step back from public politics so that he can "get a grip" on UKIP by taking "direct control" of the party.

The idea that Farage will also cut back on his media appearances – as he claims – is hard to believe. The man thrives on publicity and cutting him off from the media would be like depriving an addict of his heroin.

The bigger issue, though, is Farage's assertion that he is going to take greater control. Long before he became party leader, he and I used to sit in the shared office in Strasbourg discussing the problems of leading such a fractious party as UKIP. And despite having first Michael Holmes and then Jeffrey Titford as leader – MEPs both – we agreed that it was not a good idea to have an MEP in charge.

The debilitating effect of the travel, absence from the UK, the complexity of the task in following the EU agenda and exploiting the opportunities afforded by membership of the European Parliament, all meant that it was virtually impossible for any single person to function effectively as both an MEP and a leader. It was simply a very bad idea.

Thus, we risked ending up with the worst of all possible worlds, a representative under-performing as an MEP and also making a hash of the leadership – which is precisely what Farage has done.

The problem would not be so acute if the party had an effective management committee (in the NEC), a strong and effective chairman and/or a skilled and effective chief executive with the authority and backing to run the party. But, while lacking almost entirely any of his own management skills, Farage had been able to exercise the dark arts in which he is a consummate practitioner and had neutralised these alternative power bases.

For Farage now to say that he is going to take "direct control" is a harbinger of doom, not least in his unwillingness or inability to control his drinking pal, the oaf Bloom, who seems intent on committing political suicide. The Conservatives must think that Christmas has come early.

Nevertheless, it was UKIP the party that appointed Mr Gilpin. And now that he is complaining of being undermined by Farage, it is thoroughly perverse to have the source of the problem assume control of the mess he has created.

What is more, while there is a managerial vacuum in UKIP, there is an even greater policy vacuum. The Article 50 issue and the exit plan are just two of the areas which need considerable development and firm leadership. For Farage to desert the political leadership of the party, in order to attend to managerial aspects – for which he has little aptitude and almost no competence – is no answer at all.

The thing that makes this all so bizarre though is that Farage, having exercised far too much control in the past, now sees as the remedy exercising even more. This suggests he has learned nothing from recent experience and is entirely impervious to the bad publicity he is currently getting. The Adams cartoon from the Telegraph (pictured) and the number of adverse comments he is getting on the paper's website all point to his having scored an own goal.

But for those of us seeking improvement in the party, the concern (and energy) might be misplaced. UKIP is beginning to look as if it is beyond redemption. Without a sound ideological base and a competent leader, it may be on its way to the same political graveyard as the Social Democratic Party (SDP) which in the 1983 general election took 28 percent of the vote and has since disappeared.

The SDP's fate was to be absorbed into the Lib-Dems which, as of last week, were taking eight percent of the polls. Not ever has UKIP approached 28 percent in the polls, so it has less far to fall.

While it may do well in the euro-elections, Will Gilpin himself suggests that UKIP may underperform at the 2015 general election - and that may be the start of its decline to obscurity. Nevertheless, for all his skills, Gilpin has no track record as a political campaigner, but it is fair to say that success depends as much on good administration and management as political skills.

With Farage now assuming greater control over the helm, future campaigns are ostensibly in the hands of a man whose administrative skills do not even stretch to ensuring the publication of expenses claims, thus breaking manifesto promises. His management skills – and certainly his personnel management – can be measured as a minus quotient. There can, therefore, be no confidence that we will see any improvement in UKIP's performance under Farage's more direct control.

Then, when it comes to the vital web presence, whatever Will Gilpin's failings might have been, in Farage we are looking at a man who, until recently, had trouble finding the "on" switch on a computer. He had to get his staff to print his e-mails so that he could read them.

More importantly, we are now looking at a politician who is failing to respond correctly to political signals. Far from resuscitating UKIP's management, he is so badly misreading the signals that he is courting catastrophic failure.
But the greater disaster is a party that cannot control or restrain its own leader. This is a party which has received the kiss of death. It is sadly ironic that it should come from one of its founders, who is now set to preside over the decline of his own creation.