Energy: a new battle of Britain 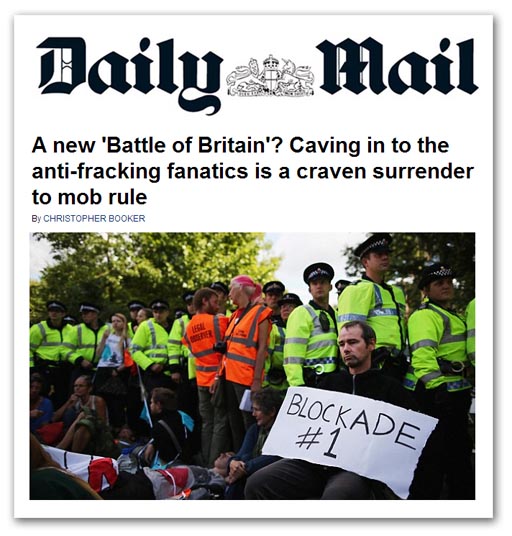 Booker gives the Mail treatment to the fracking story that is dominating today's headlines.

A handful of protesters have seemingly been allowed to threaten Britain's entire energy future, he writes, telling us that, until yesterday, the police were apparently unable (or unwilling) to stop a self-regarding gaggle of activists and mini-celebs from halting the wholly legal operations of a company planning to drill for oil in a Sussex field.

That part of the story had to be told – and Booker does it in his usual informative fashion – but, on Sunday he will be looking at a far more sinister side to this affair. Mentioned in the Spectator recently, there is serious money behind the plot, and plot it is, to disrupt the exploitation of shale gas.

The trail leads to Brussels, and in particular to the European Environmental Bureau (EEB). Virtually unknown outside Brussels, where it is based, the Bureau claims to be a federation of "over 140 environmental citizens' organisations".  With expenditure of well over €2 million a year, this multi-million organisation draws its support from most EU Member States, most candidate and potential candidate countries as well as in a few neighbouring countries.
It is thus at the centre of another vast nexus of influence, where NGOs and other groups come together to coordinate actions and organise funding, with serious money involved.
And behind the EEB are many of the government departments of environment in the EU Member States, including the UK's DEFRA, all of which provide funding from their taxpayers. But this is by no means the full extent of it. According to the 2010 Annual Report, the EEB also receives funding from Greenpeace and the WWF, and the sinister European Climate Foundation, which gave the EEB €165,000 in 2010 (the last available figures). It also gets funding from the shadowy grant foundations, such as the Garfield Foundation, the Oak Foundation and the Sigrid Rausing Trust.
This latter organisation is especially interesting as it isn't even an environmental donor organisation, its main function being to support human rights globally. Founded in 1995, it has given away Ł191.9 million to human rights organisations all over the world – or so it says. But included in that is Ł880,000 paid to the EEB, with another grant of Ł300,000 which started on 1st July 2013.

The major funder of the EEB, though, is the European Commission (DG Environment). It pours about €1 million each year into the organisation to help it with its running costs - nearly half its total income. With subsidies from Member States, this makes the EEB, like the Friends of the Earth Europe, predominately a public-funded organisation.

But this is not an impartial research institute. It is an overtly "Green" organisation, with an extreme, partisan agenda supported by all the main Green groups in Europe - which are determined to stop shale gas at any cost. This is an organisation which has been been at the leading edge, party to a paper delivered to the European Union, arguing for greater controls over fracking, so severe as to prejudice the entire exploitation of shale gas and oil.

Furthermore, its influence extends far beyond the production of briefing notes. In a memorandum to the Lithuanian government, which currently holds the EU presidency, it was able to present what amounted to a "Green manifesto" straight to the heart of power. In additional to promoting draconian measures to counter climate change, and much else, it sternly instructed the presidency:

Do not allow shale gas, the exploration of which comes with high environmental and economic risks, to become a major distraction from more effective climate and energy strategies such as energy savings and renewables.

The EEB was also pushing for an Environmental Impact Assessment (EIA) Directive going through the works to be made far stricter and to take into account climate change. If the Bureau got its way, shale gas exploration in the EU would be caught up in a nightmare of additional regulation.

Based on the EU's precautionary principle, the EEB intoned that in Member States territories where shale-gas exploitation was not banned, the EU should "ensure that those projects have to undergo an EIA taking into account the still limited knowledge on this technique and the high risk level associated". The EEB wanted "clear wording to prevent a project starting before the screening process is completed and, for those that require an EIA, before a permit or authorisation has been granted based on a valid and finalised EIA".

But what also stunned Members State environmental ministers, such as our own Owen Paterson, was the degree of access given to the EEB. At a recent meeting of the Environmental Council, chaired by the Lithuanian presidency, they were surprised to see EEB secretary general, Jeremy Wates, at the venue.

To their puzzlement, not only did Wates sit through the entire ministerial discussions - a privilege normally reserved only to senior ministerial aides and Council officials - he was allowed to address the Council at the end of the meeting. It was at that point that he was given free rein to deliver undiluted Green propaganda against shale gas and oil, with absolutely no attempt made by Council officials to ensure balance - or even technical accuracy.

Wates was clearly at home at the meeting, comfortable and relaxed, on easy terms with officials and some of the ministers, who greeted him as a familiar face. This was by no means his first venture into this territory. Thus, we have another example of the European Union paying itself to be lobbied, this time over an issue vital to the United Kingdom, uniquely affording an unaccountable NGO privileges which match those of Members State representatives.

However, even this is not the end of it. The EEB, itself the centre of its own network of influence, is also part of a wider network, grouped together under the label Spring Alliance. This has the EEB partnering with the ETUC, the European Trade Union Confederation (Syndicat) and the Social Platform.

The ETUC says it now represents 85 trade union organisations in 36 European countries, plus 10 industry-based federations. It claims as its prime objective the promotion of the European Social Model, and it says it "works for the development of a united Europe of peace and stability where working people and their families can enjoy full human and civil rights and high living standards".

The Social Platform claims to be "the largest platform of European rights and value-based NGOs working in the social sector". It says that it aims to promote "social justice, equality and participatory democracy by voicing the concerns of member organisations". It boasts nearly 40 member organisations, themselves comprising sector networks, encompassing hundreds more members. Just one, Transgender Europe (TGEU), based in Berlin, claims 105 individual members and 56 member organisations in 32 countries from the wider Europe and beyond

Through its main partner organisations, each with avowedly left-wing agendas, the EEB gains strength and enormous influence - unparalleled reach into the halls of power and the fibrils of government. This ensures the Green agenda is heard at every level of every government throughout Europe, cutting through the noise level to make sure it given a prominence far beyond its limited merits.

By comparison, the demonstrators confronting police in the UK this week, including the egregious Caroline Lucas, are just street theatre – the visible part of a sinister nexus that takes millions in funding from taxpayers and shadowy foundations.

This new "Battle of Britain", therefore, is largely being fought behind closed doors in Brussels, with the money doing the talking. The ultimate irony is that our tax money is being used to block one of the most promising development in energy this century, wielded by a sinister, unaccountable Green NGO - working within a vast nexus of influence which is given direct access to the halls of power.