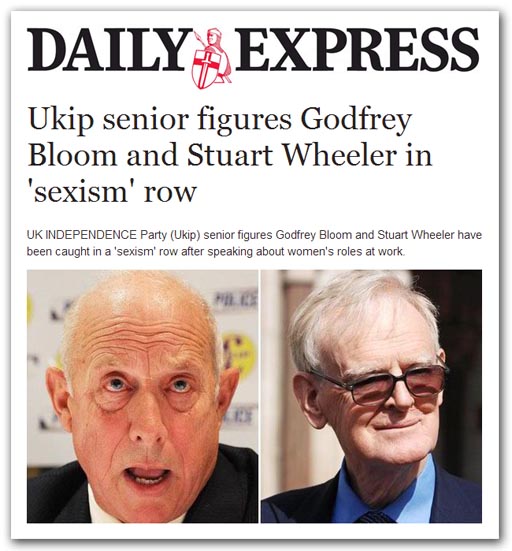 It is actually one of our forum members who notes that the EU aid paid to Egypt would be a valid issue for UKIP to take up.

"I wonder, what are Mr Geoffrey Bloom's (MEP) views on the matter", writes Mark B, our forum contributor. "It is he, and not some Swedish Foreign Minister of one of the EU's regions' (slight oxymoron I know) that should be raising this issue on the UK's behalf. But alas, he seems to have moved on to more weighty issues" - alongside Stuart Wheeler.

If one was to be fair, I could have picked up the Court of Auditors report about Egypt on 18 June. Instead, on that day I chose to write about local government and about the EU-US trade deal.

But I am only one writer, with extremely limited resources, working in my own time without salary. I am not a political party dedicated (one assumes) to leaving the EU, with a multi-million income from the European Parliament. But for the generous contributions of my readers, this blog would not function.

Had I still been organising the UKIP research and publicity effort – the one fuelling the other – I would most certainly have had a full-time person on a Middle East and North Africa (MENA) desk. And I would have had it producing a torrent of material, not least about the incredible amount of money being thrown at the Palestinian Authority, much of it seemingly being used to train schoolchildren as terrorists.

As it stands, though, UKIP does not seem to have offered any comment whatsoever about the current events in Egypt – now or ever. Nor indeed, on the UKIP website, do we see anything of significance on Palestine or anything about the Palestinian Authority – much less anything about EU aid.

Perhaps this is because the Middle East in not in "bongo-bongo land", and if Mr Bloom - UKIP's self-appointed spokesman on foreign aid – now believes that employment of women is the more important issue for the Party, then it is hardly for me to question the judgement of so senior a party figure. What UKIP does is its own affair.

And so we say, but only up to a point, Lord Copper. As a political party, UKIP is entitled to make its own decisions and need be answerable only to its members and the wider electorate (which seems remarkably reluctant to vote its members into Westminster).

In that context, Raedwald in his post – together with some of his commenters – makes some valid points. UKIP is indeed the only vehicle available for giving Cameron a massive kicking in 2014 at the European elections.

Here though, the assumption has always been that the electoral and EU-withdrawal aspirations of UKIP are one and the same and are served by the same set of activities. But what we are now beginning to address is the possibility that aspirations are diverging. What serves to promote the electoral cause may well be inimical to the anti-EU campaign.

Thus, an oafish Bloom referring to aid in "bongo-bongo land" may have an electoral appeal, especially to those sub-BNP supporters who are not dismayed by the implicit racism in the phrase. To let Bloom lose under these circumstances, is good electoral strategy – if the objective is simply to give Cameron "a massive kicking" in 2014 at the European elections.

The problem is, though, is that while Mr Bloom may be good for UKIP as a party, it is not so clear that he is helpful to the anti-EU cause. That cause has a far-wider constituency than just UKIP and it is to that wider constituency that we must appeal if we are ever to win an "in-out" (or any) referendum.

At best, UKIP can marshal 10-15 percent of the voting electorate nationally and we need more than 50 percent. It stands to reason, therefore, that we need the votes of that far greater number of people who never vote UKIP or want to be associated in any way with UKIP.

In this, I am not sure that UKIP fully understands that it does not "own" the anti-EU campaign. Further, should it come to a referendum, political parties are specifically excluded from bidding to become one or other of the official (i.e., funded) campaigns. Thus, in any referendum campaign, UKIP will not be and cannot be the lead organisation.

It is here that there is the real and present danger. As Autonomous Mind has pointed out, there are others in the game who would seek to lead the "out" campaign. UKIP, in this context, is not the "only game in town".  It is not even in this game.

Bizarrely, the one who would be CEO of any "out" campaign, Matthew Elliott, is a man with no track record whatsoever as an "outer". In the few years that he has been active on the EU issue, his writings have invariably called for a more efficient or better organised EU, promoting some form of reform - which is where he currently stands.

Given that the current framework for a referendum is between the offer of membership of a "reformed" EU and leaving it, Mr Elliott's track record is entirely related to the "in" proposition. Add his very obvious lack of knowledge on the EU and to have him lead or represent the "out" campaign would be a travesty. We would be doomed to fail.

Without better preparation, however, and a group of people prepared to step forward and develop the "out" campaign – and yes, people such as me – there is more than a distinct possibility that the well-funded Mr Elliott will be able to submit a bid to the Electoral Commission, and take leadership of the "out" campaign by default.

UKIP, therefore, if it still has aspirations of the UK leaving the EU (and I would not be alone in beginning to doubt that), needs us. It needs me, as one of the heavyweight thinkers in the game. It needs other independent bloggers and unaffiliated campaigners, it needs the CIB, it needs the Freedom Association, it needs the Democracy Movement, the Bruges Group and many others.

We, not UKIP, are going to be bidding for the lead of the referendum campaign – aiming to freeze out the impostor Elliott and his Business for Britain. And, as it stands, while we may struggle to win, UKIP can lose us the campaign with a great deal more ease.

Going right back to the start of this piece, though, we demonstrated that we have insufficient resources on our own to fight an effective campaign. UKIP has the resources – or would have if it organised them effectively. And, after the next euros, it may well have considerably more.

We can't afford to have an ineffective UKIP, or one where the balance of its activities are harmful to the cause. And inasmuch as UKIP does not "own" the anti-EU campaign, Nigel Farage and the oafish Bloom do not own UKIP. It is not their personal plaything (or ATM). The members owe it to us all, as well as themselves, to fight effectively – not just for short-term electoral gain but in the interests of the cause as a whole.

And as long a UKIP is performing sub-optimally, I see it as my right and duty to complain. When UKIP starts to perform effectively, I will be amongst the first to applaud.