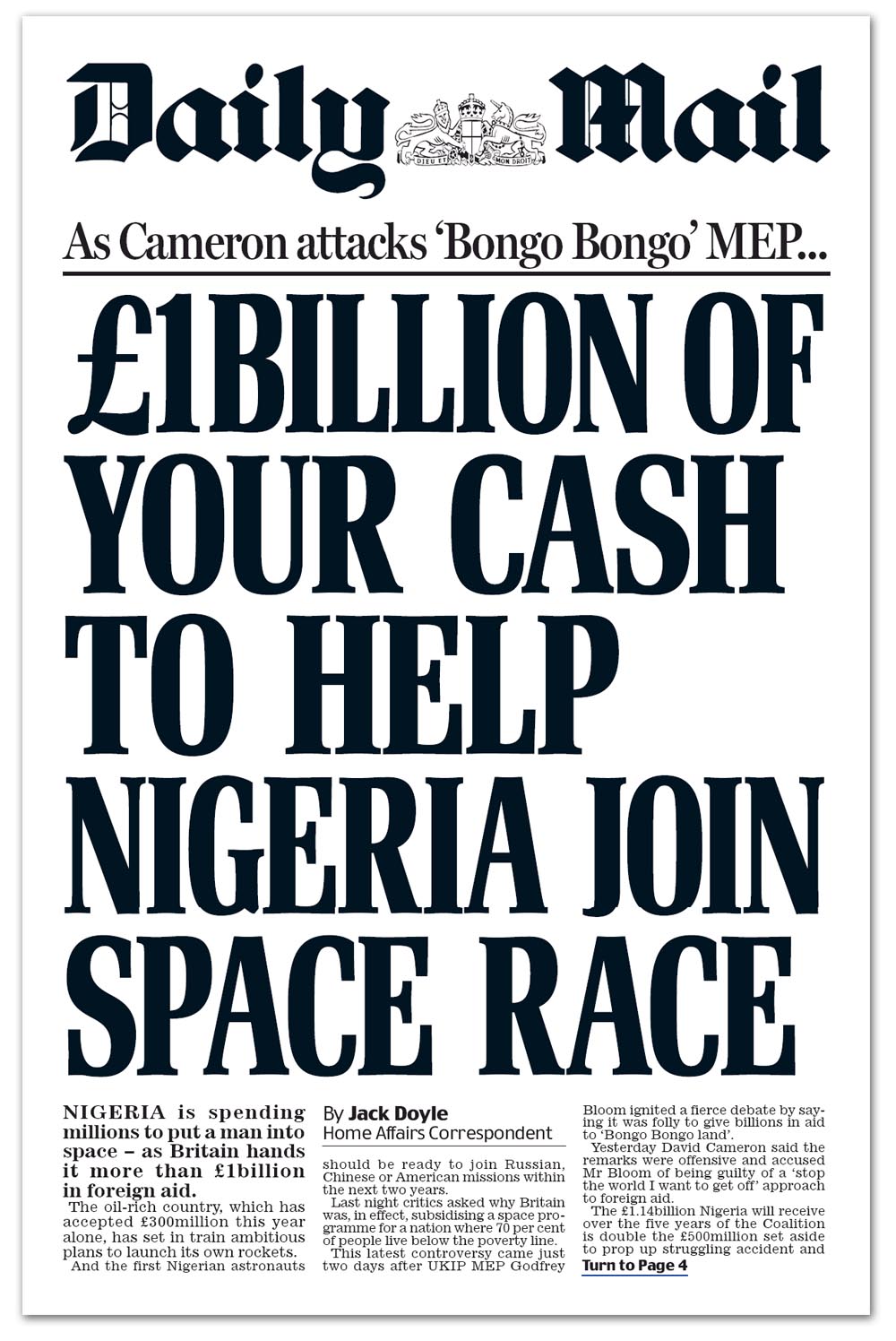 The "bongo bongo" jibe was offensive and wrong, says Cameron in the Daily Mail, the paper recording how the prime minister is weighing into the row about Bloom's foreign aid comments.

Mr Cameron's intervention, of course, does not rule out all parties being wrong. Bloom is wrong for the oafish way in which he has raised the matter and Cameron is making a weak case.

Supporters will no doubt argue that if the UKIP MEP had not raised the issue in such an inflammatory way, it would not be on the front page of the Mail today, with the paper pointing out that Ł1billion of our cash is being used to help Nigeria join the space race, despite 70 percent of the country living below the poverty line of Ł1.29 a day,

But, if there is a "bongo-bongo land", it is the Congo – not Nigeria. There, we are seeing a very different aid picture as regional conflict erupts yet again and aid has been frozen to neighbouring Rwanda.

The point here is that, long after this fuss has died down, parts of Africa will still be a mess, the UK will still be giving aid to African states, the case for large-scale foreign aid will be just as poor, and Geoffrey Bloom will still be a racist oaf.

In terms of the fight to extract the UK from the European Union, it may be the latter factoid that really matters. In the event that we do finally get a referendum on the EU, we have to ask what is more likely to influence people to vote "out": whether the UK gives foreign aid to Nigeria or because UKIP is a racist organisation.

Basically, a central part of the Europhile weaponary is the claim that the anti-EU cause is "xenophobic". This is one that has had sufficient traction for UKIP to take it very seriously and, certainly, in my day, we made extraordinary efforts to neutralise the slur.

Now, up pops oaf Bloom, offering the naysayers a gift on a platter – easy evidence that UKIP is indeed a racist party, undoing much of the work we and others had done.

In the final analysis, though, we can't actually measure the Bloom effect. We don't have the resources. But it is common cause that Bloom is a loose cannon, which means that every time he opens his mouth he is gambling with the fate of euroscepticism.

And, as we pointed out in our previous piece, he has no right to do that. UKIP has no right to let him. Euroscepticism is far bigger than UKIP and far more important. As each day passes and this controversy intensifies, the party should remember that. It actions (and inactions) affect us all.