Media: self-censorship on the EU 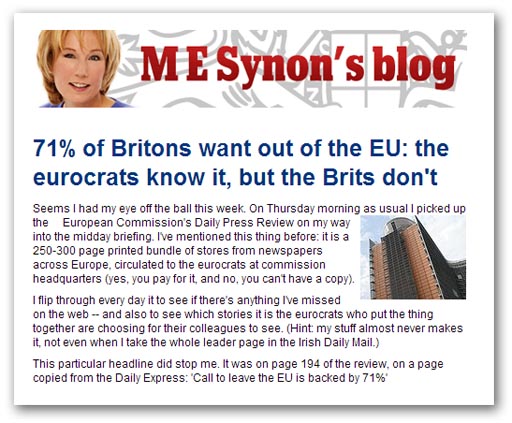 Another marginally useful piece comes from Mary Ellen Synon, this time on the Bruges Group poll. I have to say this, for if I keep writing about how brilliant she is, people might start talking! As it is, I've had to apologise to Robert Oulds for writing nice things about him. Few people' reputations can withstand such a mortal blow as EU Ref being complimentary, and I fear I have done him serious damage. He'll never, ever get another mention on Conservative Home if I keep this up.

Howsoever, Mary Ellen (or M E, as she calls herself) makes a serious point in a serious way. Although the Bruges Group poll, finds that most people – given a choice – would prefer EFTA to the EU, as a way of belonging to the Single Market, the British press, with the one exception of the Daily Express have decided that you should not know this. Even to this day, the Express is on its own in reporting the poll finding as news.

But what M E reports is that the European Commission, which produces a Daily Press Review, making up a 250-300 page printed bundle of stories from newspapers, is very often reluctant to draw attention to her stories.

Yesterday, though, she noted on page 194 of the review a page copied from the Daily Express: "Call to leave the EU is backed by 71%". The poll was commissioned by the very serious Bruges Group, so she reckoned: "Well, that's an important story. How'd I miss that on the news websites this morning?"

In this, she had assumed a similar sort of headline was in the other British papers. Except she now realises it wasn't. She saw the story, whoever who read the Express saw the story - and more to the point, the eurocrats running the press review felt the poll was important enough that even the boss-eurocrats at the top of headquarters had to see the story.

But almost nobody else did, if they relied on the legacy media. As far as we can see, just the one paper carried the poll. Says M E, "I have no answer for why the others did not. Have they got summer work-experience interns running the news desks or what?"

It is that "or what?" that worried me. I've been around the block a few times, sufficient to have developed a fairly well-developed news sense. I thought it was an important story. The several people who sent me e-mails alerting me clearly thought likewise. The Express thinks the story was important, the Commission did, M E certainly does and Booker – who is running it on Sunday – agrees.

But the rest of the media, when it concerns a poll that finds people would prefer the "Norway Option", despite their masters telling them otherwise, suddenly finds the story completely lacks any news value.

This, in my view, cannot be coincidental. We have here another wicked example of self-censorship. It suggests a media which is more interested in shaping the debate than retailing the news. We've said that before but it really cannot be repeated often enough that the media are not our friends.