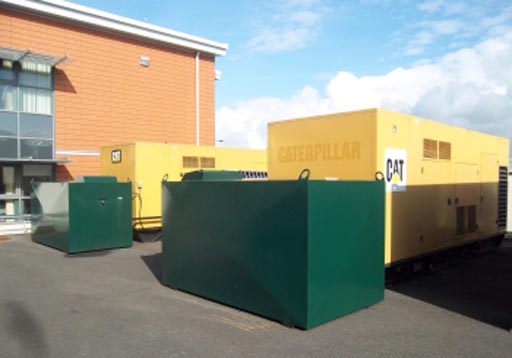 The Government is set to make a windfall profit of hundreds of millions of pounds out of a lucrative scheme to sell power from thousands of the emergency diesel generators it owns to the National Grid. The cash will come from using them to guard against the times when the wind is too low to drive the expanding fleet of wind turbines, so staving off widespread blackouts.
Public buildings, including NHS hospitals, prisons, Army barracks and RAF bases, police and fire headquarters, schools and council offices equipped with emergency generators are to be asked to make them available on 20-minute standby to back-up the grid when supply is short. For this, they will be paid premium rates, soon to rise to the equivalent of Ł600 per Megawatt hour (MWh) of electricity produced.
This is more than 12 times the rate currently paid to ordinary power station operators, and six times the rate paid to inshore wind farm owners. Potentially, this makes Government-owed generators worth hundreds of millions to George Osborne. But it also represents another "stealth tax" on hard-pressed electricity consumers, brought about by the increasing reliance on wind power which is already heavily subsidised.
The scheme, managed by National Grid, is known as the Short Term Operational Reserve (STOR).  It is better known in the private sector, where it is part of what is sometimes called "Demand Response" or even "Demand Side Response" (DSR). But the Government involvement is the real explanation behind our report on the Guardian finding that four NHS hospitals had "signed up to a deal under which they will reduce demand at peak times by using diesel-fired generators".

What the Guardian was seeing was the front end of a contract agreed earlier this year between the Government Procurement Service (GPS) and five leading electricity demand management companies called  "aggregators". These highly specialist companies are ready to exploit the huge back-up bonanza created by the wind industry, turning the Government, potentially, into one of the largest providers of reserve electricity in the country. This turns privatisation on its head. 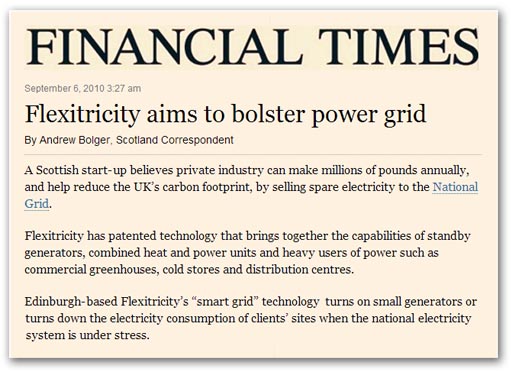 One of the aggregators which featured in the Guardian piece was KiWi Power. To administer the contract, it is working alongside another of Britain's leading aggregators, Flexitricty, which appeared in the Financial Times on 6 September 2010, claiming that private industry "can make millions of pounds annually, and help reduce the UK's carbon footprint, by selling spare electricity to the National Grid".

Now, Government is getting in on the act, alongside private sector firms, all part of what is called "Demand Side Response" of which the National Grid's "Short Term Operating Reserve" (STOR) is part.

In particular, the Government and the aggregators are benefiting from the National Grid's Aggegrator Model in STOR, introduced in December 2010, a new set of rules which effectively kick-started a new and highly lucrative electricity back-up  industry.
The rules, approved by the Coalition Government, were designed to encourage new entrants into the "reserve" market, to meet the desperate need to compensate for the intermittency of wind farms and their unpredictable performance. This ups the reserve capacity available from about 2GW to 8GW by 2020 - equivalent to five nuclear power plants. Without it, the system will be destabilised by the wind power, leading to localised and general collapse and prolonged blackouts. 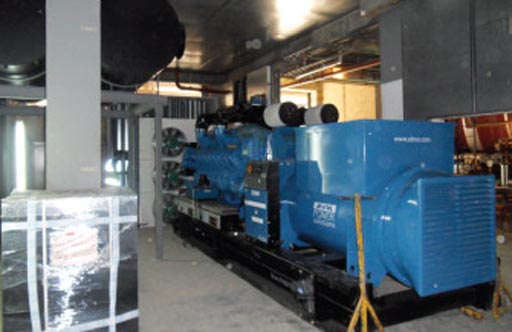 Previously, National Grid would  only take units of 3MW or more, and there was no provision to use smaller amounts of power. But, under the new rules, aggregators can collect units as low as 500KW generated by individual clients, such as a single hospital (a 1MW generator fitted in Chelsea and Westminster Hospital is illustrated immediately above), or an RAF base (pictured at the very top of this piece are newly installed CAT generators at RAF Valley). The "aggregated" power can then be sold to the grid.

Traditionally, only large industrial users could send power to the Grid. But this Government contract will rely on "smart grid" technology, which makes it possible to manage multiple small inputs from thousands of different suppliers. Remote generators are fitted with computer controls which are linked to the internet to form a network or "virtual power station". Aggregators' own control centres communicate with the equipment, using basic laptops, to turn generators on when needed - sometimes from hundreds of miles away. No action is needed by local operators.
The power is usually supplied for short periods when the grid is under stress and needs immediate capacity to replace power lost when the wind dies. This gives time for conventional power stations to be started up and brought online. Typically, the so-called STOR equipment will remain online for an hour to an hour-and-a-half during each "call". Short-lived peaks can also be "shaved", reducing the need to start up conventional power stations.

The system mirrors US experience where the giant energy management company EnerNoc - which now operates in the UK – was in 2010 already controlling 5.1GW of power from 8,200 American locations - more power than is produced by Drax power station in Yorkshire, Britain's largest, rated at nearly 4GW.
Potentially, there is 20-30GW available from standby emergency generators in Britain, much of it under Government control - which compares with the national peak winter load of 55GW and a typical daily load of 35GW.

For Alastair Martin, managing director of Flexitricity, the Government contract is the opportunity of a lifetime. His Edinburgh-based company started up in 2008 and, for every six months in the business has doubled the amount of capacity under its management.

In 2011, it was hoping to grow enough to replace one coal-fired power station and, by 2014, to manage the capacity equivalent to that consumed by the City of Manchester. Now, with this four-year government "framework" contract under its belt, Martin's company is well on its way to achieving its goal.

The power coming from Government buildings will mostly be used for the short-term balancing. But, says Martin, when it comes to dealing with the daily peaks, "there is more than enough unexploited capacity in the hands of industrial and commercial energy users. They can provide all of the reserve electricity that National Grid requires until 2020 without building a single additional power station". 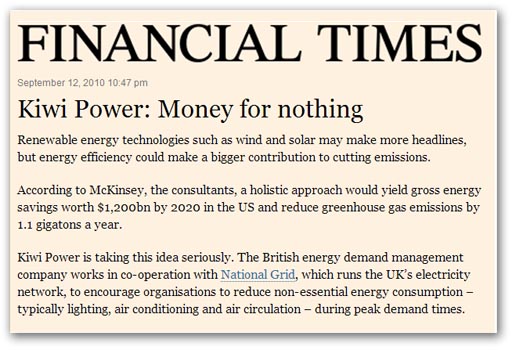 As to, KiWi Power, it is also well aware of the contract's potential. On 20 September 2010, its cynicial message to the Financial Times was that selling capacity to the grid was "Money for nothing".

Disguising the fact that it was seeking to sell "dirty" diesel-generated electricity, it concentrated on making a "green" pitch. Renewable energy technologies such as wind and solar may make more headlines, "but energy efficiency" could make "a bigger contribution to cutting emissions", it told the paper.
A holistic approach to energy management according to McKinsey, the consultants, could yield savings worth $1,200bn by 2020 in the US. Kiwi Power wanted to work with the National Grid, to exploit the potential in Britain, for a market that will be worth Ł1 billion by 2015, equivalent to five percent on electricity bills.

Instead of supplying more power, daily peaks can be reduced by cutting non-essential energy consumption – typically lighting, air conditioning, air circulation and bulk refrigeration. This is part of the Demand Response system, and operations which promise to cut their consumption to order during peaks could make Ł5,000 to Ł50,000 a year, said KiWi Power's director, Ziko Abram. But that was never to be the major part of the company's business. Even at that time, he revealed that the real money was in larger sites with back-up diesel generators, selling dirty electricity to the grid. 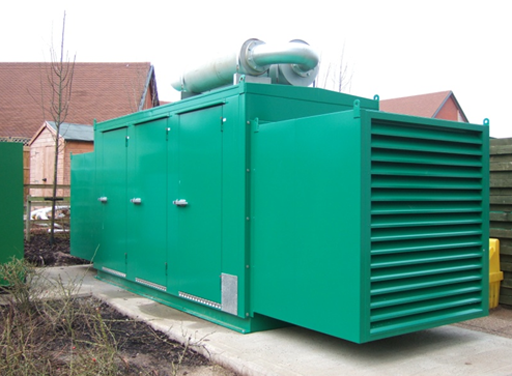 Usually, generators in public buildings are usually kept only for emergencies, and stand idle unless there is a power cut.  With occasional test runs, they may not be used for more than 200 hours in a 20-year life. But they can now be used to earn Ł100,000 a year, just for being available to the grid and producing between 50 and 400 hours of electricity each year. They are only used when not needed by their operators.

The cash potential is well known to KiWi Power. In 2010 when it was just starting out, in "almost five months" and with just 10 staff, it saved 50MW, the amount needed to power 10,000 houses. At today's inflated prices, that amount of capacity placed on the reserve market could earn fees of more than Ł1 million.
Then, the company had only twelve clients in the UK, including the Reuben Brothers, a privately property investor, Cleveland Potash Mining, the only potash mine in the UK, Eden Shopping Centre and London Oxford Airport. But even then the potential was apparent. Payments for large, energy intensive operators with backup generators can amount to "millions of pounds" the company told Mining News back in 2010.
By October 2012, KiWi Power had moved into the public sector and had signed up Lister Hospital, part of the East and North Hertfordshire NHS Trust. At the hospital, four new diesel generators had been installed (one illustrated below), giving it 4.5MW capacity to send to the grid. The machinery is controlled via KiWi Power's centre in London, when it is not needed by the hospital, and is expected to earn more than Ł100,000 a year. 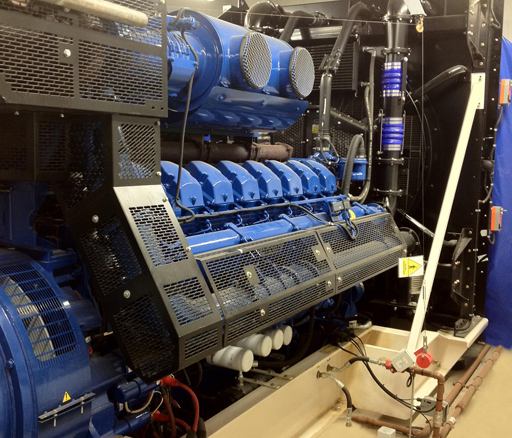 Such earnings are now to be multiplied hundred and possibly thousand-fold, as more and more generators are brought into the scheme. Leading the way will be NHS hospitals like Lister. Perhaps the one consolation for weary consumers struggling under the burden of yet another "stealth tax" on electricity, is that, if the NHS can't keep its patients alive, at least it can help keep the lights on and earn enough money to pay its chief executives' generous pensions.
COMMENT THREAD