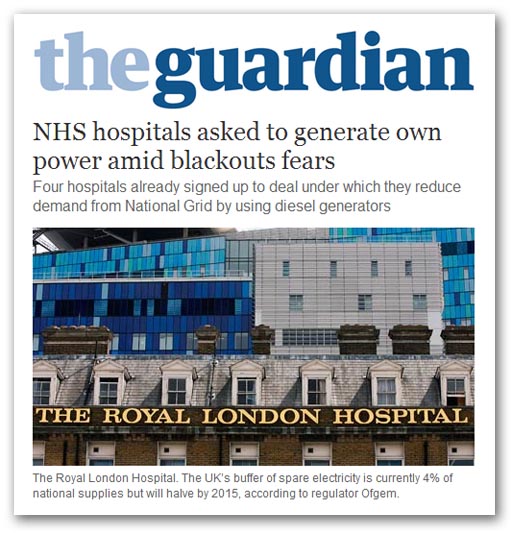 You might have thought that the low-circulation Guardian, being so much in favour of windmills and other renewables, might actually understand something about our electricity supply and the way the system is being tailored to accommodate the intermittency of most of the renewable sources.

But the moment we get an example of Electricity Demand Reduction (EDR) in action, the paper's "energy editor", Terry Macalister, goes hurtling in the wrong direction, squeaking about hospitals "being asked to cut their power demand from the National Grid as part of a government attempt to stave off power blackouts".

What we are actually seeing is a programme that has been operational for about six years and, in its current form, since April 2012. It is called the Short Term Operating Reserve (STOR), managed by the National Grid and operated by a number of contractors such as Flexitricity, NPower and KiWiPower.  In part, it has been developed to provide back-up to the system when the wind fails to blow.

The theory behind the system is that, instead of operating extremely expensive and inefficient spinning reserve and back-up power stations, operators of large generators are recruited to a scheme where their equipment can be automatically switched on to supply power to the grid during peak periods. The minimum capability to qualify is 3 MW and units must be able to come into action no later than 240 minutes after instruction. The power must be deliverable for no less than two hours.

For institutions such as large hospitals, the scheme is a bonanza. Their back-up generators have to be test-run anyway, and running them occasionally on-load, delivering power to the grid, is one of the most effective ways of ensuring system reliability. Keeping their equipment available to the grid is also highly profitable, earning as much as Ł100,000 for a full season.

Nor is this penny-ante stuff. According to the National Grid, for part of year six (2012/3), 147 units were contracted, representing a potential maximum capacity of 3.2GW. For year seven (this current year), bids of 2.2GW capacity have been submitted from 64 units, most of it available on less than 20 minute notice. With existing, long-term commitments, the grid has available 3.5 GW if it needs it.

Thus, the four hospitals reported by the Guardian are only the tip of the iceberg, the paper having only just noticed what has been going on for years. Much more capacity is rejected by the grid than is accepted. As prices increase, more capacity can be dragged into the system. Over 6 GW is potentially available – albeit with a trebling of the price.

Add to this the possibility of recommissioning mothballed power plants and potentially another 4 GW becomes available – if the price is right. Reuters certainly thinks that some plants could be returned to service quite quickly. That puts 10 GW in the hands of the National Grid, on top of currently rated capacity.

Thus, despite the failure of our energy policy, the possibility of the lights going out all over England is actually receding. But, as we have been reporting since 2008, the price of keeping the system running will be massively increased prices. This, we actually wrote in 2009, remarking that "price and not capacity" would most likely be the issue of the future.
The wickedness of rationing power by price rather than availability means that the poorest will be hit hardest, more so as the impact will be concealed. Suppliers are replacing defaulting customers' meters with pre-payment units, so they do not need to be cut off for non-payment. Those who cannot afford the higher prices will simply "self-disconnect" - their own personal "choice".
Power cuts will, by this means, become very private affairs - invisible to policy-makers and the media. And as long as the street lights keep burning, this will be a crisis the politicians can ignore.
COMMENT THREAD