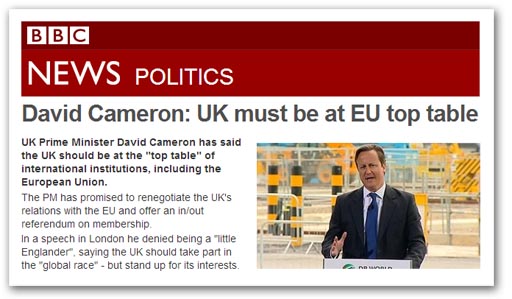 Trying to take a level and restrained view of the speech by David Cameron, where he tells us that the "UK must be at [the] EU top table" is not at all easy - as Autonomous Mind is finding.

The prime minister is arguing that the national interest requires the UK to be represented at the highest level in a multiplicity of international organisations, i.e., at the "top table". And to that effect he asserts that part of his international ambitions for the UK "is our place at the top table. At the UN. The Commonwealth. NATO. The WTO. The G8. The G20 and yes - the EU".

Now, from that, there can be only one of two conclusions. Either the prime minister is colossally ignorant of the way the world works, or Â– a more cynical interpretation Â– he believes that we are totally ignorant and he can hoodwink us with deliberate untruths - aka lies.

For the prime minister to assert that the UK can be at the "top table" of both the EU and the WTO, for instance, is to say that one or other of those conclusions must be the case. For even the meanest of us knows that, within the EU, trade policy is an exclusive competence of the commission.

When it comes to dealing with the WTO, the framework for negotiations is decided at EU level by consensus, and we are then represented at the WTO "top table" by the European Commission.

It is thus the case that membership of the EU gives us access to the "top tables" of EU institutions, but the very fact of our membership excludes us from the WTO top table. We can sit at one, or the other, but not both.

Furthermore, this is repeated across the board. When it comes to the UN Â– and its many subsidiary bodies Â– even where the EU is not directly represented as of right (and in an increasing number of cases it is), we agree to be bound by a pre-agreed "common position" and do not represent our own national interests.

But increasingly, we are not even represented on international bodies. For instance, as we pointed out earlier, when it comes to the World Forum for Harmonization of Vehicle Regulations, we have no direct membership and our interests are represented exclusively by the European Commission.

Similarly, on the vital North East Atlantic Fisheries Commission, which jointly manages the fisheries in the region, the UK interest is represented by the European Commission, and we are not even parties to the enabling treaty, the EU having taken over our seat.

Thus, Mr Cameron simply should be asserting that we can hold "top table" positions in a range of international organisations Â– in many instances, it is a question of "either or". If he is doing so out of ignorance, then it is a terrifying prospect to have a prime minister who does not know such things. If he is seeking to hoodwink us, that is deeply insulting. But that makes him either a fool or a liar, and I don't know which is more objectionable.
Of course, a case could be made that, by assuming the "top table" position in the EU is worth the sacrifice of reduced direct representation in other organisations, such as the WTO. This is not one with which I would agree, but the case can be made.

But Mr Cameron is not making that case. He is advancing an argument which is deeply flawed and, if advanced knowingly, would be fundamentally dishonest. Upon this, though, Mr Cameron builds his case further, stating:

With that, he rejects the "Little Englander" approach, arguing that he is "ambitious about pursuing our national interest and standing up for our values". But, in seeking the claustrophobic embrace of the EU, he is in fact demonstrating that he is something far worse Â– a narrow "little European".