Energy: the era of negawatts 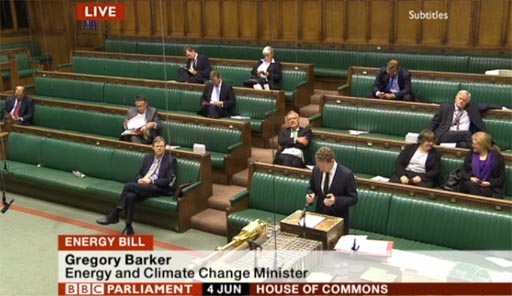 Much attention was paid yesterday to an amendment fronted by Tim Yeo, directed at pushing for a 2030 decarbonisation target. However, while that threat was very publicly seen off, creeping under the radar is the concept of Negawatts, aimed at getting us to use less electricity.

This comprised a central part of Greg Barker's speech to the Commons, delivered shortly after the Yeo amendment was defeated by 290 votes to 267 (spool to about halfway down).

The concept was announced under the joint headings of "electricity demand reduction" (EDR) and "route to market", where new amendments were introduced which – "for the very first time in our energy history" said Energy Minister Barker - "would allow energy saving projects to compete for new investment on an equal footing with power stations".

"It has long been recognised that in many cases it is cheaper, as well as greener, to save electricity rather than generate it", Barker says, then asserting that successive governments had "failed to grab the opportunity to get units of saved power, or 'negawatts' as they are sometimes called, to compete with traditional megawatts".

Thanks to this reforming Energy Bill, he then said, "the era of negawatts has finally arrived". This is to be wrapped up in a "new financial incentive", aimed at "delivering a step change in the efficient use of electricity", which would be achieved by including it in a proposed "capacity market".

Quite how this is going to work is not at all clear. The government amendment refers to "demand reduction payments", but leaves the detail to follow in a Statutory Instrument. One has to say that the legacy media is not at all helpful on this, and there is only limited reference in the specialist media. This truly is "under the radar" stuff and the story is being largely missed.

Barker tells us that, through this, we will not be building expensive new energy plants unnecessarily where cheaper alternatives for energy efficiency are available.

Delivering EDR, we are told, will allow three key objectives to be achieved. The first two are "targeting reductions at more expensive peak times" and "securing value for money because it will set megawatts against potentially cheaper negawatts". The third is "bringing permanent demand reduction projects into line with shorter-term demand-side response measures to enable more effective, joined-up delivery of energy efficiency across the board".

If you fully understand that, you are a better man than I, Gungadin, but it can't be only us scratching our heads. The government is planning to test the concepts, via large pilot, or pilots, "to better understand, among other things, the complexity of the issue and the scale of the potential".

One learns to be wary of such things, and more so as we discover that the whole idea has been rushed in at the very last moment, without even the opposition being able to see the detail.

What seems to have happened, says opposition spokesman Dr Alan Whitehead, is that, when the Energy Bill was first published, no-one had given any thought to "how to go about supporting or rewarding the verifiable and permanent reduction in industry or in domestic supply".

Some very furious paddling below the surface over the last few months resulted in the outline of how a scheme would work, which is reflected in the amendments. But even to this day, there is no clarity as to what is really proposed.

But then, throughout the debate yesterday, there were never much more than about 20 MPs sitting in the chamber. One constantly hears of how short MPs are of work, so much so that they have been given extra holidays. But when there is a really serious debate, the vast majority are suddenly too busy to attend.

Thus, we are really none the wiser about the "negawatts" which the government has in mind for us - and MPs less so. According to Energy Secretary Ed Davey, we will get to see something in writing next July, but until then we will have to put up with the mystery.

One thing is probably for certain, though. While the language of energy policy is being rewritten, this - as Booker explains in today's Mail is going to cost us a bag of money.