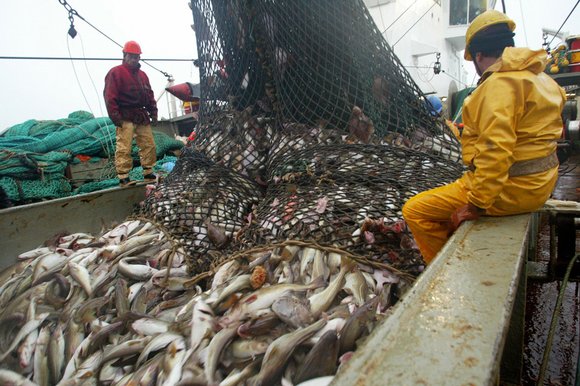 The EU's Common Fisheries Policy (CFP) is quite a complicated beast. It takes a lot of knowledge and experience, and a fair bit of expert advice from a wide variety of sources, in order to understand it.
The one thing you can't do, with any conviction – or so I thought – is wing it. But then, that doesn't take into account an almost totally ignorant media, advised by partisan NGOs and a celebrity chef with a level of ignorance that you could slice up and sell wholesale.

For the media, though, relying on such sources, the announcement from the European Commission on the agreement on the current round of fishing "reforms" heralds a great victory, not least with the supposed abolition of "discards".

Depressingly, the "smoke and mirrors" is so transparently obviously that you would have thought that even our child-like media might have scented something wrong, but this was not to be. Instead, we get the likes of Roger Harrabin for the BBC seriously reporting that the "policy" of discarding is to be phased out from 2015 starting with mackerel and other pelagic species.

Where the odiferous rat immediately makes an appearance is in the reference to discards as a "policy", as if discarding fish was a conscious decision. In fact, discarding is a consequence of the policy of setting species quotas in a mixed fishery. This results in unwanted (i.e., without quota) fish being caught, which then have to be disposed of.

In this context, one immediately recognises that the pelagic fisheries – which chase herring and mackerel – are not mixed. Modern techniques allow the accurate identification of shoals, and catches are almost entirely free of non-target species.

Where discarding does occur, it is for reasons such as "high grading", where low quality fish are dumped so that more valuable fish can be caught. In theory, this practice is already banned, which effectively means that a discard ban for the pelagic fleet is meaningless. To announce one is simply gesture politics.

As to the real problem, the demersal fleet, and especially white fish fleet chasing (mainly) cod and haddock, this is the problematic mixed fishery. And here, a discard ban does not come into line until 2020 – with the introduction of technical measures such as selective fishing.

Even then, some discarding at seas is going to be allowed. And, while the reforms are to prevent discarding at sea – what this means is that non-quota fish will be landed, and disposed of on-shore. This is marginally better than dumping at sea, but only marginally so. It will have very little effect on the overall health of the fishery.

In effect, therefore, the much-vaunted "reforms" are a big bag of nothing – a cynical PR exercise of very little consequence.

On the other hand, so depleted are UK and Irish waters (accounting for more than 80 percent of the total EU fishing resource), that much of the catch is largely irrelevant. Where the UK North Sea cod quota runs to just over 10,000 tons, while the Norwegians and Russians share a million tons from the Barents Sea alone, the contribution of of EU-managed fishery to the market is hardly worth bothering about.

Thus, the "colleagues" can delude themselves that they are sorting out their disastrous fishing policy, and the ignorant media can prattle in the background to a largely ignorant audience – the blind leading the blind. But, in pretending that something has been achieved, all of them are indulging in a collective delusion.

The worst of it all, though, is that out there in the real world, fisheries issues which dwarf the Commission's play-acting, go almost unrecorded. And there are so few journalists now who are capable of understanding the issues that there would be little point in reading what they had to offer, even if they did take an interest.

And thus is the EU able to survive – its propaganda unchecked because the media does not have the wit to tell us what is really happening, or interpret what they see.