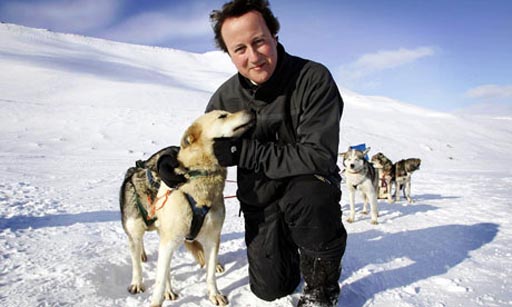 As the pages of the Telegraph and the Mail are swamped with pieces about the ongoing crisis at the heart of the Tory Party, the ever widening rift between David Cameron and his grass roots, it may be germane to recall a curious episode back in December 2006, a year after Cameron became the Tory leader.

On the Friday of that week, as usual, Christopher Booker submitted his column for the Sunday Telegraph, including a lengthy item analysing why it was already clear that what he called "the greatest gamble in modern British politics" had not come off.

This was Mr Cameron's attempt to turn the Tories into a "Not The Conservative Party", contradicting pretty well every principle the Tory grass roots believed in.

On the Saturday afternoon, just when the paper was due to go to press, he received an incandescent call from his then-editor, Patience Wheatcroft. There was no way she could allow such a piece to appear in her paper. That week's Booker column would have to appear in absurdly truncated form.

This little incident briefly caused a flutter of interest behind the journalistic scenes, prompting some mischievous observer to post entries for Wheatcroft and Booker on Wikipedia, describing what had happened, But these before long disappeared, Ms Wheatcroft herself did not last much longer as editor, her successors never censored Booker in such a way again, and history rolled on.

Six and a half years later, however, as the rift between Cameron and the Tory grass roots, contemptuously dismissed by his party chairman as "mad, swivel-eyed loons", makes front-page headlines - with Nigel Farage taking out a full-page advertisement in the Daily Telegraph inviting disaffected Tories to come over to UKIP en masse - those words which Telegraph readers were never allowed to see now seem even more apt than they might have done at the time,

This was what Booker wrote:

David Cameron ends his first year as leader of the Opposition, there are clear signs that the greatest gamble in modern British politics has not come off. The little group of ex-public schoolboys who last year hi-jacked the Conservative Party have seemed to gamble on just one strategy. List everything the Party used to stand for – low taxes, the family, rolling back the power of the state, encouraging business, upholding our defences, curbing criminals, common sense – then go for the opposite.

The essence of the gamble has been the belief that, in wooing the support of Lib Dems, would-be greenies, Guardian readers and the supposed "soft centre", they could take their supposed "core" supporters for granted. But as support for Cameron falters, all the evidence seems to suggest that those wished-for new recruits to his "Not The Conservative Party" are not forthcoming, while the Party's former natural supporters are left baffled, dismayed and increasingly angry.

All this was neatly symbolised by the recent photo-opportunities staged by the three men now competing for the role of Britain's prime minister. Mr Blair and Mr Brown, aware that defence and national security (not long ago rating 34 percent on a Mori poll) still rank very much higher as voter priorities than "environmental" issues (only eight percent), flew out to the Iraq and Afghan battle-zones to pose in front of the largest guns they could find. Mr Cameron, at the same time, flew out to the Sudan, in Lord Ashcroft's CO2 emitting private jet, to be pictured cuddling a little refugee child. It was the "Men from Mars" against "the Boy from Venus". "Darfur Dave" did not come well out of the contrast.

The tragedy is that, confronted by the most corrupt, hypocritical, inefficient, illiberal, discredited government in history, what millions of voters are looking for is an alternative which might put an end to the sleazy, self-regarding sham of the Blair era by displaying some "masculine" firmness: in cutting back on the bloated public sector and the out-of-control bureaucracy which is destroying our health service, education and police; which might encourage enterprise; which might restore democracy to local government; bring back some balance into our public finances; sort out the shambles into which our Armed Forces are sliding; uphold Britain's national interest, as we suffocate under the malfunctioning system of government represented by the European Union.

In other words, what much of the country is crying out for is a party which represents precisely those values which Mr Cameron's Not-The-Conservative Party seems so hellbent on abandoning. As for what he stands for instead, almost the only clear message Darfur Dave seems to have put over to the voters is his sentimental "save the planet" greenery, on which his dotty little gimmicks and practical ignorance have simply made him a laughing stock.

What many voters sadly begin to conclude is that Dave and his cronies seem so hopelessly ill-equipped to take on the serious business of government that, if we have to choose between one gang of PR merchants and another, better stick with the devil we know. Hence the evidence of the latest polls appearing to show that the gamble has failed. Ever larger become the number of would-be Conservatives sorely tempted to join that 40 percent who already feel so alienated from politics that they just stay sullenly at home. But the Guardian readers are scarcely flocking to replace them. So where does all this leave our country?

And that was more than six years ago. Even more so now than then, we are asking the same question. As the Conservatives go into complete meltdown, where does all this leave our country?