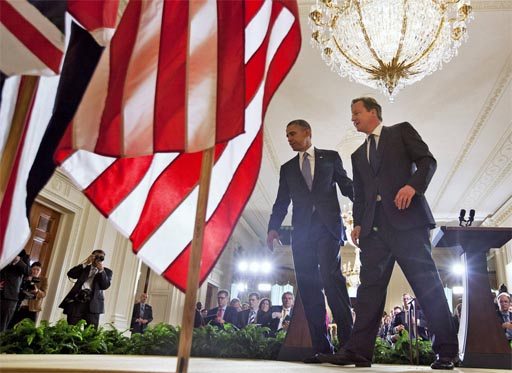 David Cameron will propose laws tomorrow to guarantee that the public is assured an in-out referendum on Britain’s membership of the European Union before the end of 2017.

So says one of the businesses owned by the Telegraph Media Group Ltd, which also tells us that the Conservatives will take the highly unusual step of publishing "draft legislation". This will illustrate the law that the Tories would like approved.

The president called for Mr Cameron to be given time to "fix" the EU, asserting that, "you probably want to see if you can fix what's broken in a very important relationship before you break it off". He then warned that Britain would lose influence if it ever left the single market.

Comments like this are politically illiterate, but are typical of American politicians and many US commentators, who understand the nuances of UK politics about as well as we tend to understand the nuances of theirs. Our problem with the EU, for instance, isn't specifically that anything is broken. It is that the EU is a putative United States of Europe - and we want no part of it.

However, we need have few fears about an Obama endorsement. American presidents interfering in British politics do not go down well, so his intervention is not likely to help Mr Cameron.

And nor is this "draft legislation" any big deal. A government Bill is not going to follow, so the best the Conservatives can hope for is a private member's Bill. This has only a limited chance of becoming law, and then only if supported by the Lib-Dems. As it stands, that support is unlikely, so we are being treated to gesture politics.

There is also the question of timing. If Mr Cameron is set on the renegotiation path, he must have some certainty that he will be able to conduct and conclude negotiations with the "colleagues" in good time for a referendum campaign to be conducted. That, effectively, means doing a deal by the end of 2016, or very early in 2017, only 18 months or so after the general election.

Assuming Mr Cameron does get re-elected, this is a very small window for renegotiations – or would be if there was any intention of them seeking serious concessions. And it depends entirely on the good will of the "colleagues", who could refuse to deal – as is widely expected.

All-in-all, therefore, we are not very much further forward. There is still no certainty of a referendum and it is in any case dependent on the successful conclusion of negotiations, over which Mr Cameron has no control.

Putting all this together, these recent events don't do so very much to enhance Mr Cameron's credibility either. On top of the imponderables, the anti-politics vote keeps soaring, making his re-election ever more unlikely.

One of these days, the man will realise that the only way off the hook he has impaled himself is Article 50 – but it is going to be a while yet before he gets to grips with the inevitable.