Energy: they really are serious 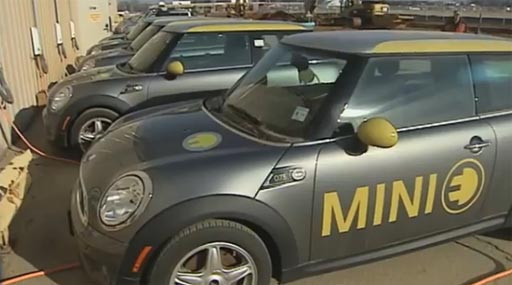 Publicised by Euractiv and many others yesterday was the news that the University of Delaware had sold power from electric vehicles to the power grid for the first time – in what appears to be the first working application of the Vehicle-to-Grid (V2G) concept.

There has to be a reason why a website specialising in EU news should be carrying this item, and that is undoubtedly because V2G is slated as an essential of the EU's response to increased use of intermittent and highly variable renewable energy, and in particular the use of windmills.

A more detailed story about the cars is here, which highlights the upside of this event. Vehicle owners are actually getting paid to connect their vehicles to the grid, but only as long as their stored electricity is available when called for.

To explore this further takes us into highly complex areas, delving into the realms of "dynamic demand" – a sophisticated means of adjusting load demands. This is seen as an alternative to the "spinning reserve" system which is based on providing additional power when the demand increases.

In the traditional electrical supply system, generators feed electricity into the grid and, when demand increases, as it can do very quickly, additional capacity is brought on-line, usually fossil fuel plants (gas), already warmed up and "spinning", able to feed power into the grid within seconds.

With the advent of wind power, when supply can drop very quickly and cannot be increased, things change. "Spinning reserve" would have to be massive, the costs enormous, and the emissions high. Thus, the alternative being proposed is this "dynamic demand".

The basis of "dynamic demand" is regulating the grid not by adding capacity but by adjusting (i.e., removing or shifting) the demand continuously, using (in one system) the frequency of the electricity supply as the trigger. In the UK, mains electricity is normally supplied at 50 Hertz. When it drops below a certain frequency level (which happens when the supply is low), the system is geared to shed load.

In the case of electric cars in the V2G system, charging is interrupted – thus the load is shed. But, as an added refinement, the accumulated power is returned to the system as a contribution to stabilising the frequency. When there is an excess of power in the grid, the electricity frequency increases and the cars start charging again, bring the frequency back down.

When the car batteries are fully charged, there is even a suggestion that the car heaters should be automatically turned on, to use up the "wrong-time" electricity.

That is what is meant in practice by yesterday's piece, in which we identified a report to government recording that, "No longer is it considered viable for electricity to be provided 'on demand' in response to the requirements of end-users".
In November 2010, former energy minister Chris Huhne called this a seismic shift in energy policy and one which EU commissioner for energy, Günther H. Oettinger, called in the same month a "paradigm shift in the way we produce, transmit, distribute and trade energy".

The importance of this cannot be over-emphasised. The historical relationship between supplier and customer has been completely turned on its head. Instead of providing the capacity to meet demand, industry is required to make its priority "decarbonisation".

In this new "paradigm", customers will have to make do with what the industry can supply. When electricity runs short, there are two options available. The first is called "demand management" and the second, "demand response" – sometimes called "demand-side response " or DSR.

"Demand management" is a euphemism for cutting supply, while "demand response" is a bundle of techniques for shifting consumption from peak periods to times of lower demand. And in what is known as the "market-based approach", the response is initiated at the customer end, on the basis of variable price signals.

Underpinning this is a triad of "smart" technology, the "smart" grid, the "smart" meters and "smart" appliances. In the fully developed system, the grid is able to communicate with appliances, via the smart meters, sending information on price levels, which can be changed – increased or decreased - at half-hour intervals.

The theory is that individual appliances will be programmed to accept electricity only below pre-set price levels. When the price is increased above the levels set for the appliances, they will either not start, or shut down, and remain inactive until the price drops.

In this context, the electric car is just another "appliance", accepting electricity only when the price barrier allows. But, with the V2G system, there is that additional refinement of returning electricity to the grid.

A more basic system, though, is set out by the European electricity group ENTSO (European Network of Transmission System Operators), which is defined as "Low Frequency Demand Disconnection (LFDD). Arguably, this is a form of demand management.

This does not need a "smart" grid, or even a "smart meter". Instead, appliances rely on the grid supplying electricity at the set frequency. The frequency of the electricity supplied is continuously "read" by chips embedded in domestic appliances and when it falls below pre-set levels, the appliances shut down and will not restart until the frequency is back within limits.

What makes this different, in principle, from the "market-based approach" is that there is no communication between the generator and the customer. There is no data transfer. This is "autonomous DSR". But, like the "market-based approach", if it is to support frequency regulation in case of extreme events – severe supply shortages – a large number of appliances must be fitted with chips.

Here we come the bombshell. ENTSO is telling the EU commission that the best way to secure the necessary number of appliances is to make fitting chips "a mandatory requirements for a pre-defined list of devices". Fridges are high on the list.

Looking at the way the supply situation is deteriorating, it might well come to the stage where the commission believes it has no option but to agree. It will be either that, or Europe-wide power outages. Therefore, in a very short time – by EU standards – we could find a large range of electrical appliances compulsorily "chipped".

And then the fun will start.