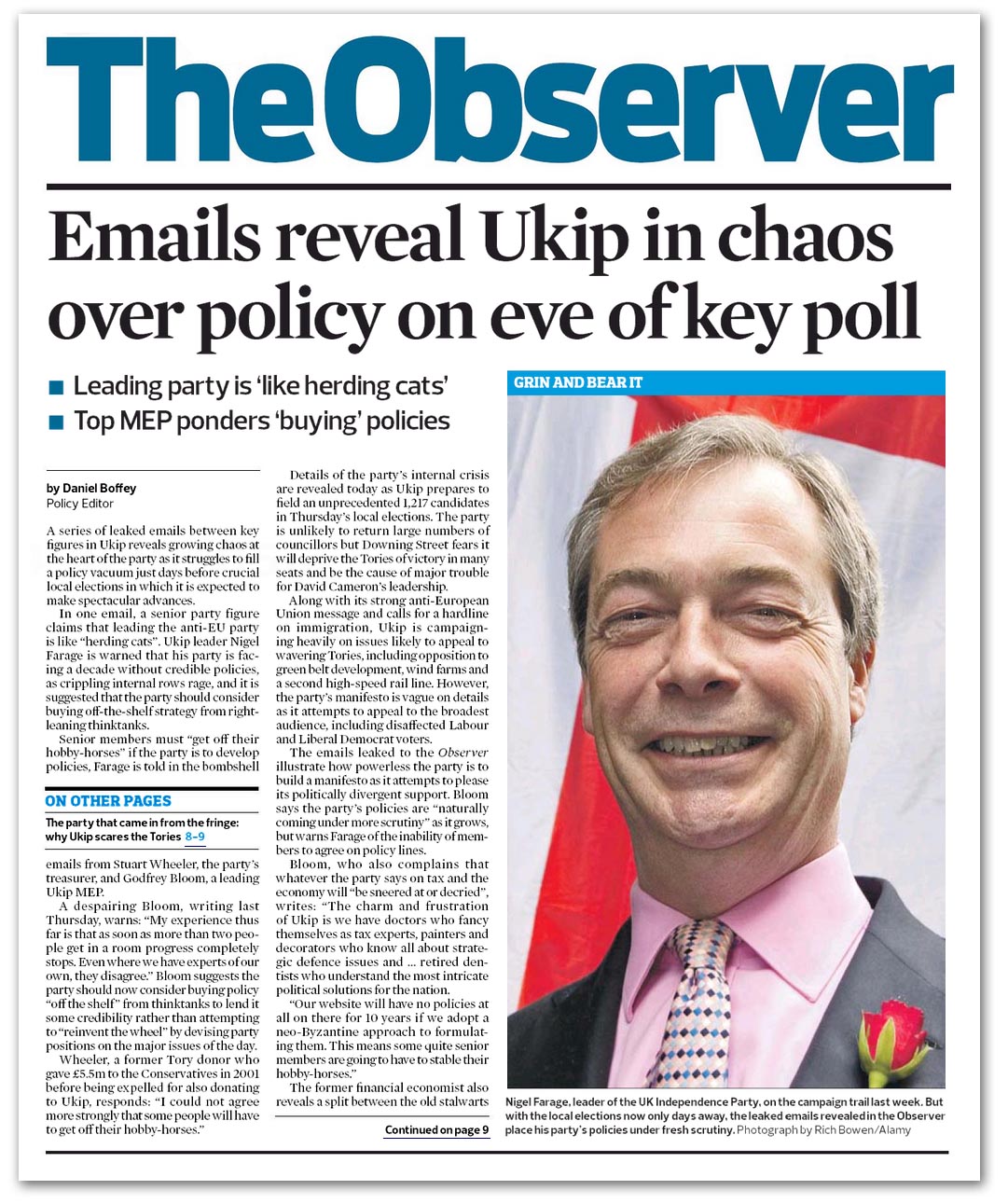 The Observer is running a front page story on UKIP's "chaos" over policy. One response, though, is to smile at the din of the chickens, inbound to diverse roosting points. At the same time, one despairs at the ten wasted years when some serious policy development could have been underway.

Then, one can only marvel at the irony at the Observer identifying the ghastly Bloom as the "senior MEP" complaining about the lack of policy. Farage aside, if there is one man at whose door responsibility can be laid for the policy vacuum, it is Godfrey Bloom.

On the other hand, though, this is a win-win situation for UKIP's critics. Given a policy vacuum, they can criticise the party for its lack of policy. But, had the party actually develop any policy worthy of its name, it would then be open house on attacking UKIP policy.

The fact is, of course, that no matter what UKIP did at this current juncture, it is creating such a "disturb" that its rivals would be seeking weaknesses to bring to the attention of the electorate. That is what party politics is all about.

The great shame is that, should UKIP actually succeed in gaining a number of seats, then the policy vacuum will really matter. Successful candidates will find themselves having to make policy on the hoof, with all the lack of coherence and contradictions that that implies.

From there, the likelihood is that we will see a familiar pattern. The newly emergent party will be no more able to deliver than the ones it replaces. After a short honeymoon, faction fighting will break out (as it always does). Disillusionment will sets in, the public will loss faith and move on to another potential saviour – or give up altogether.

It is never possible, nor wise, at this juncture, to predict what will happen, but one can always learn from the past and what has happened. And here, for more then ten years, I have been warning UKIP about its lack of intellectual base, and the lack of is policy development. Now, the wasted years are taking their toll.

Needless to say, Lord Ashcroft in the Mail on Sunday has a different "take", charging that the UKIP leader is in it for himself, destroying the only chance eurosceptics have of getting an "in-out" referendum.

If it was the case that Cameron's offer of a referendum was genuine, and that he was truly set to give us an "in-out" choice, instead of a rigged poll, based on some mythical renegotiations. But, since the offer lacks any credibility, Ashcroft's points simply amount to special pleading.

What the establishment politicians cannot cope with though, is that they are so tarnished by their lies, deception and indifference to public wishes, that an increasing number of voters would prefer the dubious blandishments of the Farage show, compared with anything that they have to offer.

No one with any intelligence seriously expects UKIP to deliver anything of substance. But as a commentary on the poverty of establishment politics, it is very hard to beat.

To the extent that a vote for UKIP is a vote against the establishment, it doesn't really matter what the likes of the Observer or Lord Ashcroft say. In fact, the more they squeak and squirm, the more attractive UKIP becomes – since the whole objective is to see the establishment in disarray.