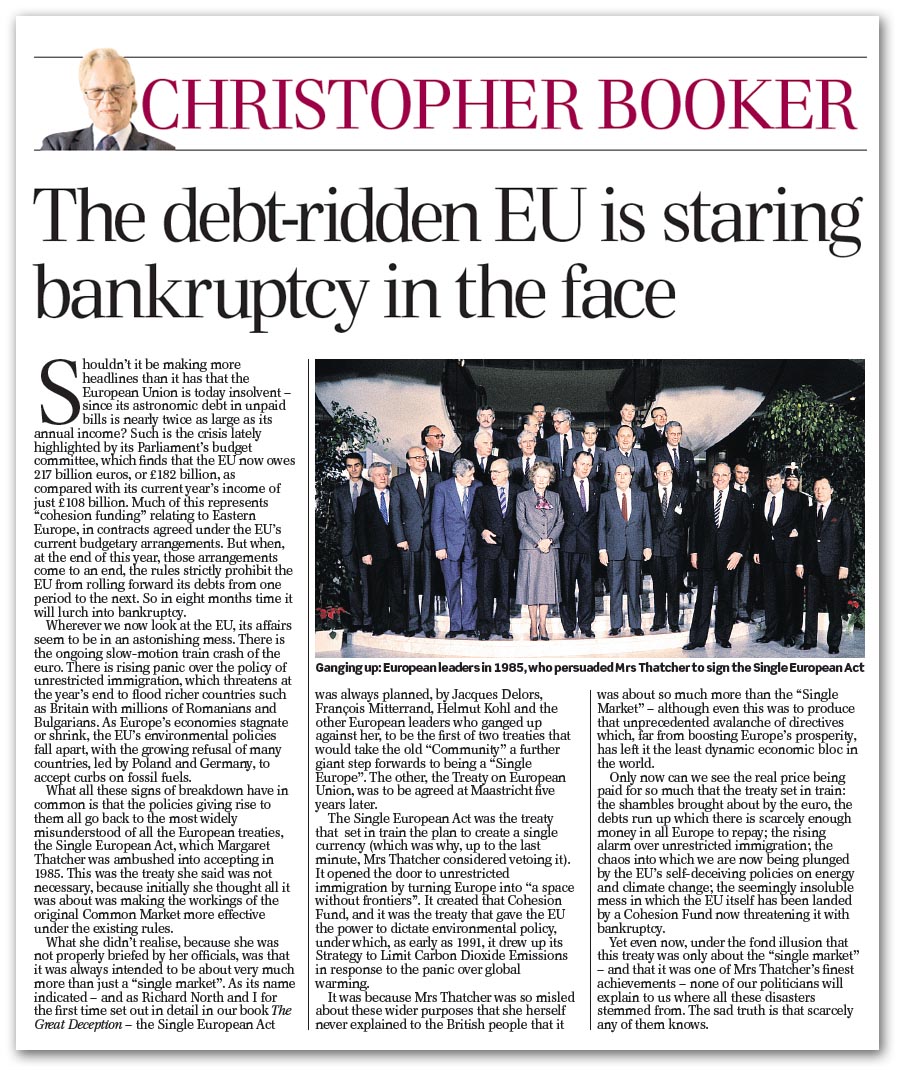 According to Article 310 of the Treaty of the Functioning of the European Union, the annual budget of the EU "shall be in balance", which means that expenditure must not exceed revenue in any one year. This, effectively means that the EU cannot go into debt and must meet all the payments in the year that they come due.

However, this is the EU we are talking about, and there is always a way round such tiresome limitations. What the Commission does is defer payments through a system called RAL (reste ŕ liquider). This is a process of taking on commitments which, although they will come due eventually, have not legally been translated into payments – i.e., no invoices have been submitted.

A commitment, says the Commission, is "only" a pledge to make a money transfer in the future. It only becomes "outstanding" when an invoice is approved for payment. Until then, it doesn't have to be shown in the books.

The sum of the commitments reflect policies agreed at EU level, with corresponding amounts "foreseen" in the legal acts of the respective spending programmes, such as the seventh research framework programme, "Lifelong learning", the European regional and social funds, rural development, the European Return Fund, and the Instrument for Pre-Accession Assistance.

Previously, the Commission has squared the circle by bumping the commitments to the end of the multi-annual budgetary period, but payments are now being deferred beyond that, all in expectation of continually increasing payments from member states.

However, it was already getting worried by the extent of its commitments in 2011 and when, last year, the member states refused to increase the budget and (so far) have yet to agree to an amendment budget for last year, there is now a very real prospect that the EU will not be able to pay its bills. Technically, it will be insolvent.

Thus does Booker ask in this week's column whether this should be making more headlines than it has that, since its astronomic debt is nearly twice as large as its annual income.

This, though, is by no means the only problematical area for the EU. Wherever we now look at the EU, Booker writes, its affairs seem to be in an astonishing mess.

There is the ongoing slow-motion train crash of the euro. There is rising panic over the policy of unrestricted immigration, which threatens at the year's end to flood richer countries such as Britain with millions of Romanians and Bulgarians. As Europe's economies stagnate or shrink, the EU's environmental policies fall apart, with the growing refusal of many countries, led by Poland and Germany, to accept curbs on fossil fuels.

Yet, few people appreciate that all these signs of breakdown have something in common: that the policies giving rise to them all go back to the most widely misunderstood of all the European treaties, the Single European Act (SEA), which Margaret Thatcher was ambushed into accepting in 1985.

This was the treaty she said was not necessary, because initially she thought all it was about was making the workings of the original Common Market more effective under the existing rules.

What Thatcher didn't realise, because she was not properly briefed by her officials, was that it was always intended to be about very much more than just a "single market".

As its name indicated – which Booker and I set out for the first time in detail in our book The Great Deception – SEA was always planned, by Jacques Delors, François Mitterrand, Helmut Kohl and the other European leaders who ganged up against her, to be the first of two treaties that would take the old "Community" a further giant step forwards to being a "Single Europe". The other, the Treaty on European Union, was to be agreed at Maastricht five years later.

In fact, the SEA and Maastricht were originally intended to be one treaty, as framed by Spinelli, and the split was only made on the advice of Mitterrand.  But the SEA was every bit as important as Maastricht, not least because it included the plan to create a single currency (which was why, up to the last minute, Mrs Thatcher considered vetoing it).

This treaty also opened the door to unrestricted immigration by turning Europe into "a space without frontiers". It created that Cohesion Fund, and it was the treaty that gave the EU the power to dictate environmental policy, under which, as early as 1991, it drew up its Strategy to Limit Carbon Dioxide Emissions in response to the panic over global warming.

It was because Mrs Thatcher was so misled about these wider purposes, Booker argues, that she herself never explained to the British people that it was about so much more than the "Single Market" – although even this was to produce that unprecedented avalanche of directives which, far from boosting Europe's prosperity, has left it the least dynamic economic bloc in the world.

Only now can we see the real price being paid for so much that the treaty set in train: the shambles brought about by the euro, the debts run up, which there is scarcely enough money in all Europe to repay; the rising alarm over unrestricted immigration; the chaos into which we are now being plunged by the EU's self-deceiving policies on energy and climate change; the seemingly insoluble mess in which the EU itself has been landed by a Cohesion Fund now threatening it with bankruptcy.

Yet even now, under the fond illusion that this treaty was only about the “single market” – and that it was one of Mrs Thatcher's finest achievements – none of our politicians will explain to us where all these disasters stemmed from. The sad truth, Booker concludes, is that scarcely any of them know.