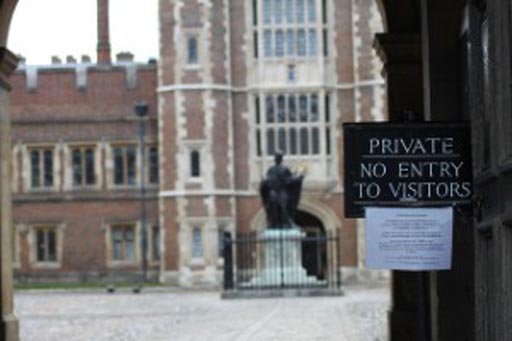 Guest post
One of the more interesting features of the phenomenon known as "Thatcherism" was the fact that, high on the list of those who never really got the point of what made her such an exceptional political leader, were many of those who sat round her own Cabinet table. One has only to think of Geoffrey Howe, Michael Heseltine. Chris Patten and Kenneth Clarke to see how obvious this is.

Although they were happy to ride on her sledge to three election victories, they never had any real sympathy with what she stood for, or any understanding of why "ordinary voters" turned out for her in such numbers. And in the end of course, it was they who turned on her to bring her down.

Another minister who rode uncomprehendingly on her coat-tails, although he only entered the Cabinet days before her resignation, was William Waldegrave, who has now become, as Provost of Eton, a quintessential elder of the establishment.

In this grand guise he was invited by The Times to write a piece on Wednesday headed "On global warming she’d trust the science". Loftily dismissing whatever she might have said, "if anything, in her long retirement", he asked what she would have thought today about climate change. It would "depend on who she trusted. Would it have been with the sceptics Christopher Booker and Nigel Lawson, or the scientists Robert May and Martin Rees. Who knows?"

Waldegrave leaves us in no doubt which side he believes Lady Thatcher would have been on. "I personally think she would have accepted the majority position – the majority of scientists, that is".

What Waldegrave is here trying to sweep under the carpet, of course, is the embarrassing fact that, having originally been a hugely influential convert to the theory of man-made global warming, she came in her retirement – in her last book Statecraft, published in 2002 – to a view which could not have been more diametrically opposed to the one she originally held.

By this time she had clearly read up on the subject rather more than she had done in those more impressionable days back in 1988. when she fell under the spell of James Hansen, Crispin Tickell and Dr John Houghton.

Among the sources she cited to support her change of view were two papers by that most authoritative of all critics of the global warming scare, Dr Richard Lindzen of MIT, one of the world's most eminent atmospheric physicists. The result, as I summed it up in my column in this week's Sunday Telegraph, was that:

pouring scorn on what she now called "the doomsters", she questioned all the main scientific assumptions which had been used to drive the scare, from the conviction that the main force shaping world climate is CO2 rather than natural factors such as solar activity, to exaggerated claims about rising sea levels. She mocked Al Gore and the futility of what she called all the "costly and economically damaging" schemes to reduce CO2 emissions, She cited the 2.5 degree rise in temperatures during the Mediaeval Warm Period as having had almost entirely beneficial effects. She pointed out that the dangers of a world getting colder are far worse than those of a CO2-enriched world growing warmer. And she recognised how distortions of the science had been used to mask an anti-capitalist, left-wing political agenda which posed a very serious threat to human progress and prosperity.

I don't know whether Lord Waldegrave ever read the nine pages of her book, headed "Hot air and global warming", and I very much doubt whether he has ever read anything written by Prof. Lindzen - let alone much else written in recent years by those scores of other eminent scientists and other experts who have questioned every one of the a priori assumptions used to promote the belief in CO2-induced global warming.

Much easier, in deference to the fashionable orthodoxy, just to imply that Lady Thatcher's later views were no more than the senile ravings of an old woman in her retirement, and to place against them the ex cathedra pronouncements of his fellow-pillars of the establishment such as Lord May and Lord Rees, each carrying with him all the unimpeachable authority which goes with being a President of the Royal Society.

But as those of us who have followed this debate rather more closely than Lord Waldegrave are aware, Lord May and Rees have in recent years presided over the transformation of the Royal Society from an institution respected down the centuries for championing the scepticism inseparable from proper scientific enquiry (symbolised in its motto nullius in verba, "take no one’s word for it") into a quite shameless lobby group for the warmist orthodoxy.

Neither Lord May, a specialist in population biology, nor Lord Rees, an astronomer, have ever shown any understanding of the scientific debate over the warming theory - any more than has their successor at the head of the Royal Society, the geneticist Sir Paul Nurse.

One after another, these men have shown themselves to be no more than uncomprehending propagandists for the orthodoxy. When they venture outside their own specialism, they are capable of uttering the most amazingly unscientific tosh - while at the same time, as goes with the warmist territory, being quite insultingly intolerant of anyone daring to question that orthodoxy.

So there it is. The late Lady Thatcher listened to the view of Dr Lindzen, arguably the world’s leading atmospheric physicist, Lord Waldegrave, without bothering to look at the evidence or think it out for himself, would prefer to believe what he is told by a population biologist and an astronomer, neither of whom have any scientific authority to pronounce on such matters at all.

What they do have, as Presidents of the Royal Society. is what Gustave Le Bon identified as "prestige". Nullius in verba indeed. As a onetime classical scholar, Lord Waldegrave should quietly meditate on what Horace actually meant by those words from which the Society derived its motto.