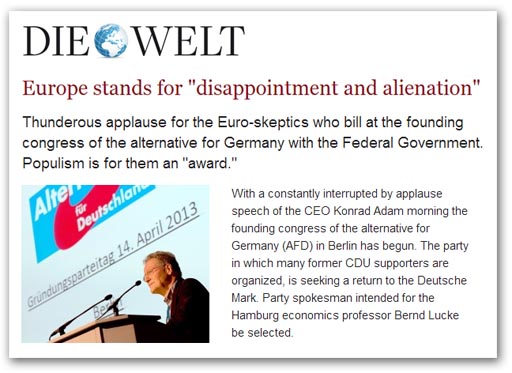 Convened today was the founding congress of the AFD, attended by 1,500 people at the Hotel Intercontinental in Berlin. A long report from Die Welt, together with FAZ has it that "thunderous applause" constantly interrupted the proceedings.

The opening speech was delivered by Konrad Adam, former member of the Frankfurter Allgemeine Zeitung editorial board and for nearly seven years the chief political correspondent for Die Welt.

Europe, he said, stood for "disappointment, outrage, and alienation", which drew the "thunderous applause" of the members. What has been gained over many decades, had been lost in just a few months, with the "alleged rescue policy" having "discredited Europe", Adam said.

With their policy, the values of the French Revolution, liberty, equality, fraternity, had been "sold out" and the politicians were quite obviously not doing their duty. Instead, he had the impression from them that: "When God gives office, he also makes them crazy".

Also speaking was Joachim Starbatty, professor of political economics and the man who has filed repeated complaints with Germany's constitutional court. He told members that, "Europe is tearing itself apart right now". According to Starbatty, "A currency which is supposed to have united a continent is doing precisely the opposite".

His "take" on the currency was that it was weak and ailing largely due to the fact that individual members were no longer in the position to be able to sustain it. Therefore, he said, it would be better for non-competitive countries, like Greece, Ireland, Spain, Italy, etc, to leave". An alternative, Starbutty argued, would be for Germany to leave.

If possible, Konrad Adam was even more forthright, speaking "clearly from the soul". Greece, he said, was ruled by the troika until further notice: "Loud men who don't get their mandate from the Greek people". He referred to the "great liberal" Ralf Dahrendorf saying that there had never been a functioning democracy beyond the nation state. "But you cannot say such a thing today or the language police intervene", Adam told the meeting.

Responding to the slur that they were a "populist" party, Adam told his members that they should consider the accusation as a compliment. "After all", he said, "democracy is a very populist event because the last word is given to the people".

When he then declared that the AFD wanted to offer voters an alternative to those who so stubbornly maintain their grip on the established parties", this had members rising to their feet applauding.

AFD co-founder, Bernd Lucke, called for an "orderly exit" from the euro. The new party had started, he said, aimed at breaking out of the "straitjacket" of rigid and ancient parties. People, said Lucke, wanted to end the "hopeless rescue policy" - and the "blatant violation of democratic, constitutional and economic principles".

If the CDU in the late nineties had told the people the truth, that Germany in the single currency would be liable for hundreds of billions of euros as a result of mismanagement in other countries, nobody would have believed them. But the "liability and debt euro" had now pitted people against each other and had even had southern Europeans making comparisons between Merkel and the Nazi Chancellor.

And so it has begun. A new party has been born.