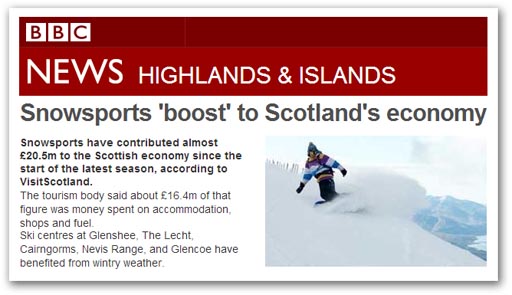 Snow sports have contributed almost Ł20.5m to the Scottish economy since the start of the latest season, the BBC is reporting – without so much as a blush.

Ski centres at Glenshee, The Lecht, Cairngorms, Nevis Range, and Glencoe have benefited from wintry weather, and Ski-Scotland is saying that this season could be one of the best snow sports seasons in Scotland in recent years. 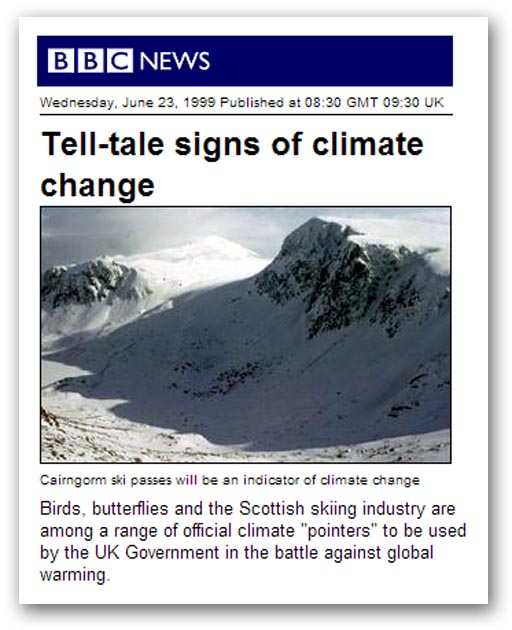 The BBC, of course, has been making a special "thing" about Scottish skiing and climate change, reporting in June 1999 that the industry was to be used by the UK Government as one of a range of official climate "pointers" in the battle against global warming. 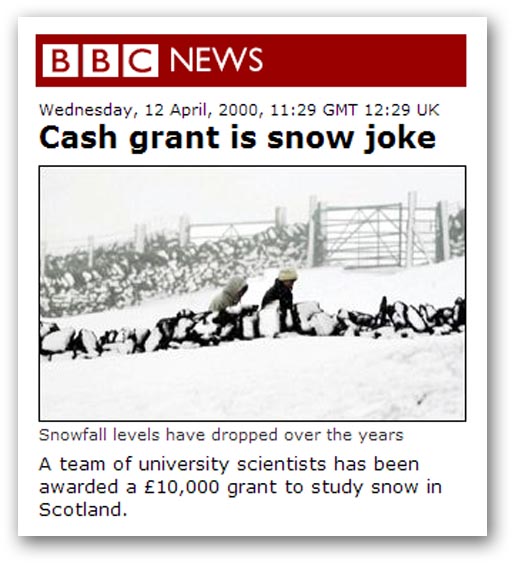 And then there's the money. In June 2000, the state broadcaster was dutifully reporting that "snowfall levels have dropped over the years", telling us that a team of university scientists has been awarded a Ł10,000 grant to study snow in Scotland.
The money was to be used by researchers at Stirling University to examine the effects of climate change in Scotland on skiing and other industries. The previous year, the team, from the university's department of environmental science, had warned the skiing industry faced a bleak future because climatic changes would leave lower snowfall levels on "nursery slopes". 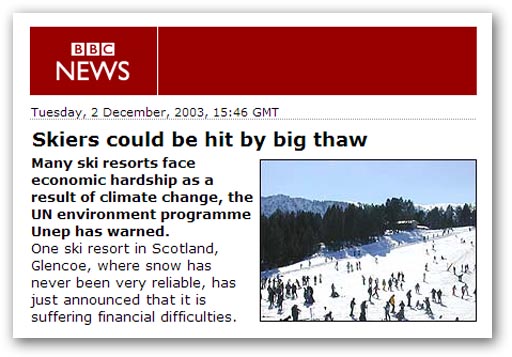 In December 2003, the BBC happily retailed a UN environment programme (UNEP) report which warned that many ski resorts faced economic hardship as a result of climate change, noting also the happy coincidence that one ski resort in Scotland, Glencoe, where snow had never been very reliable, had just announced that it is suffering financial difficulties. 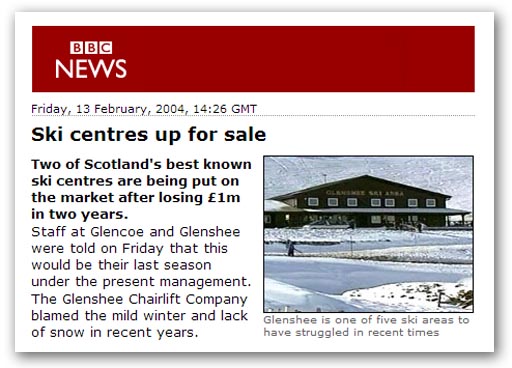 A year later, in February 2004, with almost palpable glee, the BBC was reporting that two of Scotland's best known ski centres were being put on the market after losing Ł1 million in two years. Staff at Glencoe and Glenshee had been told that this would be their last season under the present management.

Just so that there could be no confusion as to the cause, the BBC noted that the Economist magazine had issued a warning over the future of skiing in Scotland due to warmer winters and dwindling profits. Snow for skiing is becoming scarce due to climate change, the BBC announced. 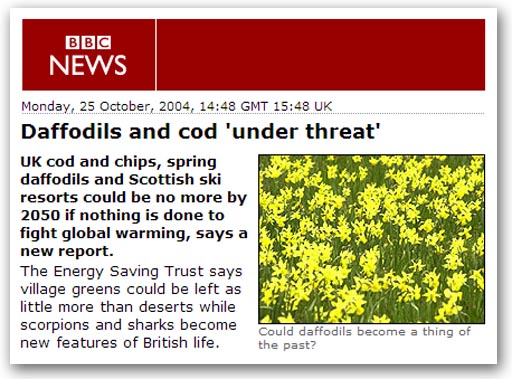 Yet another report caught the attention of the BBC in October 2004, this one from the Energy Saving Trust. Offering a litany of woes attributable to climate change, it warned that UK cod and chips, spring daffodils and Scottish ski resorts could be no more by 2050 if nothing was done to fight global warming. 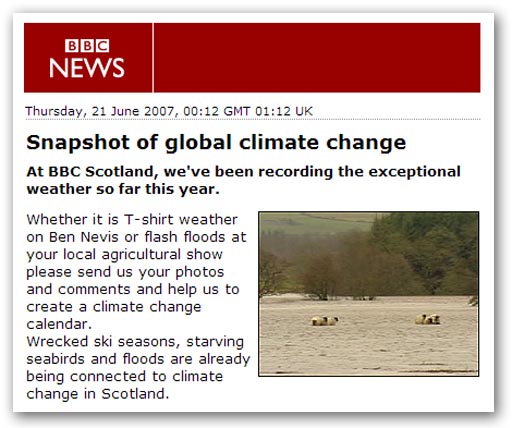 In December 2006, the BBC was revelling in the unusually warm autumn, which had kept snow away from the ski slopes, and by June 2007 was celebrating "wrecked ski seasons" and asking for readers' photos and comments to "help us to create a climate change calendar".

While you can't blame every twist and turn on global warming, said the BBC, only a handful of scientists now doubt that we're seeing a long-term trend and that humans are responsible for Earth's increased atmospheric temperatures. These days we're more likely to get rain than snow. Cairngorm Mountain said they have just had their worst-ever ski season. 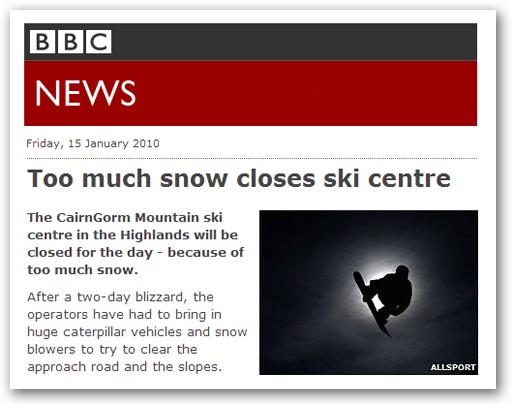 The CairnGorm Mountain ski centre in the Highlands had been closed for the day after a two-day blizzard had blocked access roads with about 15ft of snow. Further up the mountain the drifting had buried the funicular railway track in about ten places, and the tunnel mouth. 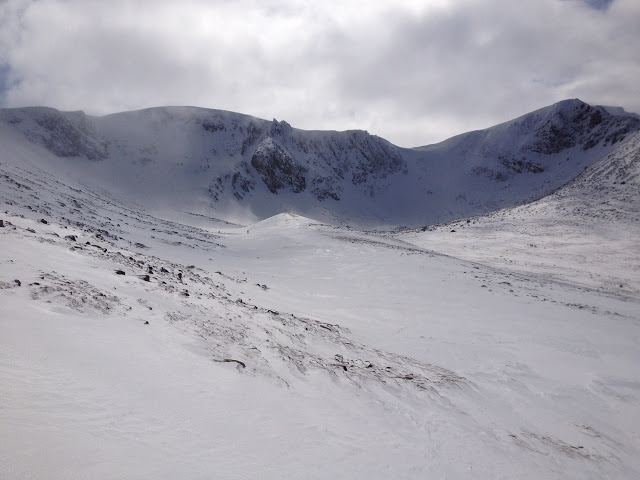 And now we see so much snow that the ski centres are making a profit and the seasons have never been better. I suppose that warmists can always rely on their predictions having a fifty-year life span, and we're only fifteen years in. But along the way, the BBC has been quick to attribute warm winters to global warming.

By their own measure, therefore, we should be approaching a new ice age – not that the BBC will ever admit to that. But they did tell us that the Cairngorms would be taken as an indicator of climate change, and the picture above was taken on Monday. We should take them at their word.