Booker: the wrong kind of Leafs on the road 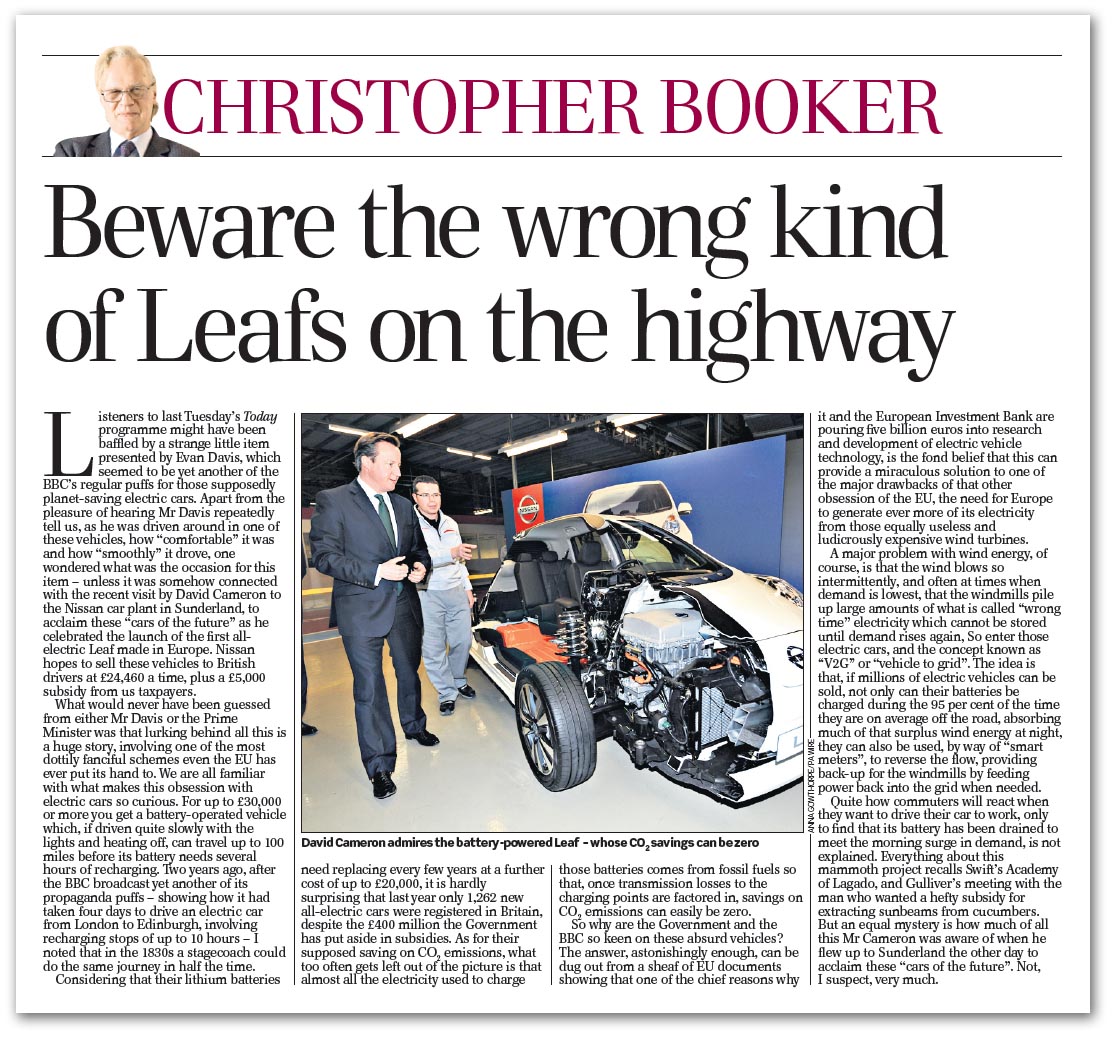 Believe it or not, this one is for real but, if it had been published on 1 April, we might have been struggling to convince people that it wasn't a send-up. But the idea of electric cars being used to power the grid when the windmills run out of puff was actually covered in the loss-making Guardian back in June 2009, so Booker is in good company.

In fact, the possibility was being openly discussed in 2007 and, three years later, a proof of concept experiment was being mooted in the Danish island of Bornholm. This morphed into the Edison project, with thousands of electric vehicles coupled to the electricity network, to become a "virtual power plant". Across the pond, the Centre for Carbon Free Power Integration at the University of Delaware was also getting heavily involved.

Nevertheless, writes Booker in this week's column, listeners to last Tuesday's Today programme might have been baffled by a strange little item presented by Evan Davis, which seemed to be yet another of the BBC's regular puffs for those supposedly planet-saving electric cars.

Apart from the pleasure of hearing Mr Davis repeatedly tell us, as he was driven around in one of these vehicles, how "comfortable" it was and how "smoothly" it drove, one wondered what was the occasion for this item.

One theory is that it was somehow connected with the recent visit by David Cameron to the Nissan car plant in Sunderland, to acclaim these "cars of the future" as he celebrated the launch of the first all-electric Leaf made in Europe. Nissan hopes to sell these vehicles to British drivers at Ł24,460 a time, plus a Ł5,000 subsidy from us taxpayers.

But what would never have been guessed from either Mr Davis or the Prime Minister was that lurking behind all this is a huge story, involving one of the most dottily fanciful schemes even the EU has ever put its hand to.

We are all familiar with what makes this obsession with electric cars so curious. For up to Ł30,000 or more you get a battery-operated vehicle which, if driven quite slowly with the lights and heating off, can travel up to 100 miles before its battery needs several hours of recharging.

Two years ago, after the BBC broadcast yet another of its propaganda puffs – showing how it had taken four days to drive an electric car from London to Edinburgh, involving recharging stops of up to 10 hours – we noted that in the 1830s, a stagecoach could do the same journey in half the time.

Considering that their lithium batteries need replacing every few years at a further cost of up to Ł20,000, it is hardly surprising that last year, only 1,262 new all-electric cars were registered in Britain, despite the Ł400 million the Government has put aside in subsidies.

As for their supposed saving on CO2 emissions, what too often gets left out of the picture is that almost all the electricity used to charge those batteries comes from fossil fuels, so that, once transmission losses to the charging points are factored in, savings on CO2 emissions can easily be zero.

So the question remains as to why the Government and the BBC are so keen on these absurd vehicles. And the answer, astonishingly enough, is the fond belief that they (or their batteries) can provide a miraculous solution to one of the major drawbacks of that other obsession of the EU, the need for Europe to generate ever more of its electricity from those equally useless and ludicrously expensive wind turbines.

A major problem with wind energy, of course, is that the wind blows so intermittently, and often at times when demand is lowest, that the windmills pile up large amounts of what is called "wrong time" electricity, which cannot be stored until demand rises again.

So enter those electric cars, and the concept known as "V2G" or "vehicle to grid". The idea is that, if millions of electric vehicles can be sold, not only can their batteries be charged during the 95 percent of the time they are on average off the road, absorbing much of that surplus wind energy at night, they can also be used, by way of "smart meters", to reverse the flow, providing back-up for the windmills by feeding power back into the grid when needed.

And, for this fantasy, the EU is prepared spend serious money, with no less than €5 billion being set aside for the "green cars initiative", made available through European Investment Bank (EIB) loans, Seventh Framework Research Programme (FP7) grants and "demand-side measures and public procurement".

At least €220 million in EIB funding has gone to the Nissan plant to fund the production of the Leaf, and there have been substantial funds allocated from the €197 million initial research budget on electric cars, to develop the V2G concept.

We see €1.39 million going to just one project, €3 million on another, €4.4 million on yet another, and €6.7 million on one more. Add another €4 million and an infrastructure project for €9.2 million, plus €3.2 million for control system development, and you have the strongest of evidence that the EU is taking this project very seriously indeed.

The bizarre thing is that, if this project ever comes to fruition, we might be seeing commuters unable to drive their cars to work because their batteries have been drained to meet the morning surge in demand. Everything about this mammoth project recalls Swift's Academy of Lagado, and Gulliver's meeting with the man who wanted a hefty subsidy for extracting sunbeams from cucumbers.

But an equal mystery is how much of all this Mr Cameron was aware of when he flew up to Sunderland the other day to acclaim these "cars of the future". Not, Booker suspects, very much.