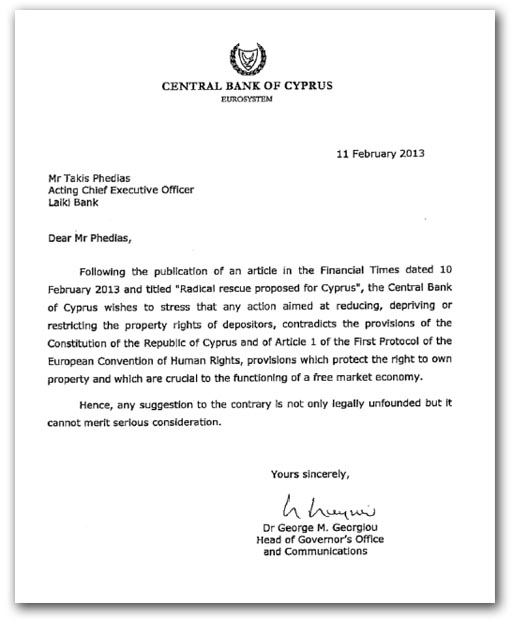 The Deutsche Wirtschafts Nachrichten (DWN) has picked up on a letter from the Bank of Cyprus, discovered by the TV station Sigma TV, which shows the head of communications lying about the impending expropriation of depositors' funds.

Dated 11 February – more than a month before the EU "rescue" - it refers to an article in the Financial Times on 10 February, which suggested that the EU Commission was proposing to "force losses on uninsured depositors in Cypriot banks.

The response from the Central Bank of Cyprus, signed by Dr George M Georgiou, the Head of the Governor's Office and Communications, was to deny the possibility of such an action.

It would, wrote Georgiou, "contradict the provisions of the Constitution of the Republic of Cyprus and of Article 1 of the First Protocol of the European Convention of Human Rights, provisions which protect the right to own property and which are crucial to the functioning of the free market economy.

Any suggestion to the contrary, Georgiou averred, was "not only legally unfounded" but it could not "merit serious consideration".

A month later, this is precisely what happened, which has DWN observing that "outright lies are destroying the foundation of the economic system". The more powerful and less transparent the Central Banks become, the more necessary it is – in their view – to lie.

In terms of the broader implication, that paper says that whatever Mario Draghi now does, you will have to think of Mr Georgiou's tactic: "smile and lie". You have to think: what the man is doing? Does it matter what he actually says? Does he mean the opposite of what he says?

The paper goes on to say that, if blatant falsehood has become part of the central banks' legitimate means of communication, then they should be abolished. They have in recent years manipulated everything that can be manipulated. No one can believe them any more.

Central banks turn out to be more than the cancer of the financial crisis. They are a strange hybrid, semi-political, semi Bank. They are not accountable to anyone. There is no transparency. There is certainly no control.

From being the main custodians of financial stability, they have become the main players in the "global high casino", the paper says.

This is stern stuff from a German newspaper, but it reflects a wider and growing sentiment. The central bankers are not to be trusted. They tell blatant lies and seem to believe that different laws and rules apply to them.

Yet, says DWN, it cannot be that these institutions to not have to act in accordance with the rules governing any honourable businessmen. "Good faith" is a principle that must apply to all. Those who are setting it aside have stepped over the line which separates them from a criminal organisation.