Horsemeat fraud: a statement to the House 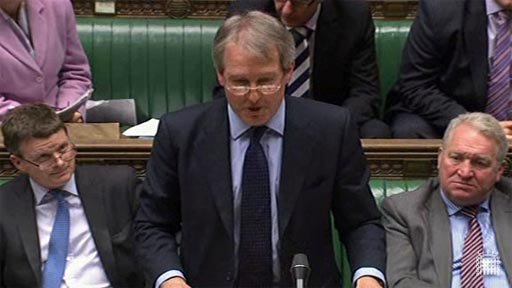 At 5.35 pm yesterday, the Secretary of State for the Environment, Owen Paterson, stood up to make a statement to MPs on "developments with regard to horsemeat and food fraud".

Obligingly, the Pope decided to resign at the same time, to take the heat out of the issue, although Tesco went and spoiled it all by reporting that the meat in some of its "value" spaghetti bolognese comprised more than 60 percent horsemeat.

As an aside, I'm a little bit suspicious of these high-level DNA reports. They have all been found in cooked products and heat degrades DNA, making species differentiation more difficult. But, for technical reasons, horse DNA might better survive the cooking process, thus skewing the results.

Anyhow, said Mr Paterson, the ultimate source of these incidents is still being investigated, but "it is already clear that we are dealing with Europe-wide supply networks".

Now, the great eurosceptic Paterson is in the delicious position of liaising with the European Commission and other member states. He has been in touch with Irish Minister Simon Coveney on several occasions since 28 January, he spoke twice to him yesterday, and has spoken to European Commissioner Borg, the French Minister Stéphane Le Foll and Romanian Minister Daniel Constantin.

The next step is that, on Wednesday there will be an urgent meeting in Brussels with Commissioner Borg and the Ministers from the member states affected. In addition, it has been agreed that this issue will be on the agenda of the Agriculture Council on 25 February.

Once the full facts of the current incidents have been established, and the areas identified where enforcement action can be taken, Paterson will be wanting to "look at the lessons to be learned". He will make a further statement about that "in due course".

Paterson, however, then lobbed in his grenade which so infuriates the opposition. While the statists wanted the Secretary of State to take charge, he bluntly told them that the prime responsibility for dealing with the problems lay with retailers and food producers. It was they who needed to demonstrate that they had taken all necessary actions to ensure the integrity of the food chain in this country.

This was not what the ghastly Mary Creagh, shadow Secretary wanted to hear. Screeching about "this incompetent Secretary of State", she complained that he had the temerity to go home on the Friday last, not perhaps understanding that iPads and telephones exist, which allow tech-savvy politicians to work away from base.

Nor did she seem to understand that this had been a low-level issue and the crisis really only took off once reports of high-level adulteration started emerging last Thursday. That Paterson managed personally to get together retailers and industry leaders for a meeting by the Saturday, when the FSA had not thought it possible to call them in at such short notice, was not good enough for Creagh.

But what must really rankle is that Paterson is so blithely acknowledging that food regulation "is an area of European competence" and that under the European legal framework, main responsibility for the safety and authenticity of food lies with those who produce, sell or provide it to the customer.

It was also difficult Mary Creagh to deal with the fact that the Food Standards Agency, with which Paterson is working, was set up by the previous Labour Government as an independent agency, and that he is respecting its independence, allowing it to get on with its job and make its own mistakes.

The whole idea of the FSA was to take the party politics our of food safety, so that the agency leads the operational response to problems, not the politicians. Yet, the old-fashioned Mary Creagh would have it that "the food industry, and No 10 it is rapidly losing faith in this Secretary of State's ability to lead them through this crisis".

Nevertheless, it was Paterson who emerged smiling from No 10 yesterday morning, still in office after an impromptu emergency Cabinet meeting headed by David Cameron, then to take on Creagh's spiteful little complaints. Only later did No 10, partly on the basis of Paterson's briefing, inform the media that there was no evidence of a health risk from consuming horsemeat.

Creagh is echoed in nastiness by the Mirror this morning which is also behind the curve, writing of "Food Secretary Owen Paterson" being "slapped down for failing to get a grip on the crisis".

This was the Secretary of State that spoke in the House of trying to get away from the expression "food chain", talking of an "extraordinary network" - an amazing kaleidoscopic variety of factories and suppliers all working together.

It is a real network, said Paterson, and what is quite clear in this case is that there has to be more rigorous and more random testing. I have faith in the advice of the independent Food Standards Agency, but down the road, I would like to see more random testing.

Then to get all the players on a Europe-wide basis together for Wednesday is something of a coup. He has got Commissioner Borg to accept that there must be changes to the control regime, and has his agreement that more hands-on testing across the board.

This is not a man failing to get grip. Rather, Paterson is turning Hague's little slogan on its head. For the moment, we seem to be in Europe and ruling Europe. Even the French are being helpful and friendly.

This surely cannot last but we should savour the moment, especially as the Independent hates it so much it has its own Donald Macintyre spitting with fury. Whatever else, to have the press on the "left" so hostile is surely an achievement.