Horsemeat fraud: wanting it both ways 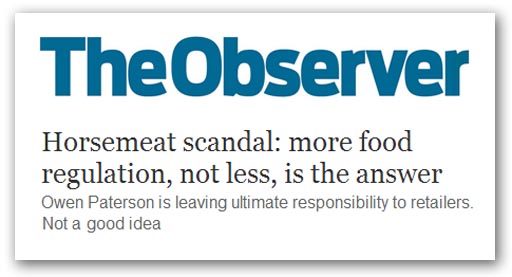 For newspaper editorial writers, and journalists generally, knowing next to nothing about a subject is an asset. In fact, combined with a mind which rigorously filters discordant material, this seems to be an essential qualification. And the two attributes combine in a perfect storm of ignorance in The Observer editorial, where the paper demands "more food regulation, not less".

We should focus, it pontificates, "on the mass retailers and the light-touch regulatory regime under which they operate", then turning on Owen Paterson's observation that those retailers had "ultimate responsibility" for what they sold. This, the newspaper concludes, "suggests that regime is unlikely to be beefed up in the near future".

One staggers at the assertion that the "mass retailers" (aka supermarkets) are subject to a "light-touch regulatory regime". No one who had the slightest knowledge of food law in general and food safety law in particular could begin to make such a jaw-dropping assertion.

But the ultimate irony, from a newspaper that is so enthusiastically pro-EU, is that, in stating that the "ultimate responsibility" rests with retailers, the eurosceptic Paterson is doing no more than re-stating EU law.

This is set out in Regulation (EC) No 178/2002 "laying down the general principles and requirements of food law, establishing the European Food Safety Authority and laying down procedures in matters of food safety", where Recital 30 declares:

A food business operator is best placed to devise a safe system for supplying food and ensuring that the food it supplies is safe; thus, it should have primary legal responsibility for ensuring food safety. Although this principle exists in some Member States and areas of food law, in other areas this is either not explicit or else responsibility is assumed by the competent authorities of the Member State through the control activities they carry out. Such disparities are liable to create barriers to trade and distort competition between food business operators in different Member States.

Presumably, The Observer would not want to see Mr Paterson breaching fundamental principles of EU law although, from the tone of its editorial, it clearly seeks that outcome. One can only conclude, therefore, that the newspaper's understanding of the law is slight, to non-existent.

On this subject, we have so far written three pieces: Let them eat horse; criminal negligence; and a porous network - this is the fourth. A constant theme of these pieces is that this horse meat scandal represents an egregious failure of the EU system of regulation. It is to this that The Observer should be looking – not at the scale of regulation, but the type, which is designed to secure the free circulation of goods within the internal market.

Separately, though, the newspaper reports on "international fraud by mafia gangs", but there is not the least recognition that this situation is the inevitable consequence of the EU regulatory regimes.

When, on the one hand, the food industry is mandated, by way of regulation, to adopt a paper-based system of control (HACCP) and, on the other, to work within an international environment where border checks have been abolished, and when the national authorities are required to vest "ultimate responsibility" for food controls with the food businesses, the system is wide open for exploitation by criminals. All the traditional controls have been dismantled.

The trouble is that this europhile newspaper seems to want it both ways. It is happy to see the European Union take over the power from member states to make food regulation, to to abolish border controls, but when the system goes "catastrophically wrong", as Labour's Mary Creagh put it today, it goes bleating to the national government demanding that things are put right.

This hypocrisy, born of ignorance, blights the entire EU debate. With very few exceptions, even eurosceptics are failing to see the links between the EU and the horsemeat scandal. But, if national governments are blamed every time an EU system goes wrong, we will never get any further in beating the monster.