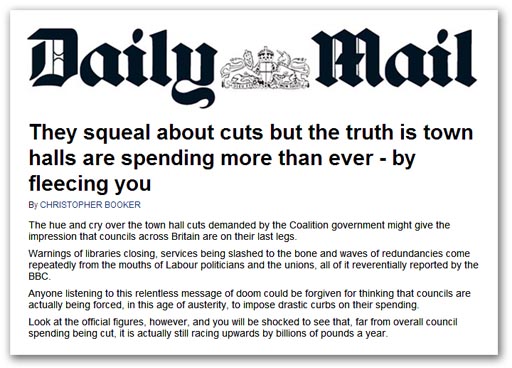 On top of everything else these week (watch for the Sunday Telegraph tomorrow), we've been working on a piece for the Daily Mail, which has gone into the paper today under Booker's name. There was a time when it would have had both our names on, but not any more.

The article is loosely based on this, which a wrote back in October 2011, pointing up a major structural change in the way local government is funded, with a gradual shift from Council Tax to fees and charges, so much so that this source of income now exceeds the headline income from Council Tax.

Overall, we then see that, despite the rhetoric on "cuts", in the past six years local government spending in England alone has risen by more than 25 percent to an all-time record of more than Ł170 billion. The freeze on Council Tax rates is so much window dressing.

The fact is, writes Booker, that our bloated local authorities, with so many of their senior officials now being paid far more than the Prime Minister, have been cunningly devising every kind of new way to take money off us.

It is one of the best-kept secrets in British politics, he says, costing us all ever-more billions of pounds every year. Yet we are scarcely aware of what a revolution it represents in the way we are governed. The truth is that these new money-grabbing ploys earn councils as much every year as they get from council tax itself.

Some of the biggest beneficiaries of this "smoke and mirror" financing, Booker writes, are all are those who, for one reason or another, take early retirement, such as the Cumbria CEO who walked off with Ł464,000, or the South Somerset CEO who left early with a pay-off of Ł570,000, or the controversial CEO of Suffolk who stepped down at a cost to the taxpayers of Ł350,000, plus another Ł115,000 to pay for an investigation into her "domineering management style".

How telling that it should be these self-same people who are still presiding over the greatest explosion of local authority spending in Britain's history - and how clever they have been to hide the way they are extorting that avalanche of money from the rest of us.

This is what the Harrogate Agenda is about. It is all very well Pickles having his silly little referendums if local authorities want to raise Council Tax by more than two percent, but while we are watching the front door, the officials are creeping round the back and raising income anyway, but under different categories.

Thus, the only way to control the local authorities is to bring the entire budgets under public control, and put them annually to a referendum. Instead of focusing on just a tiny part of the budget, we need to be looking at the whole thing.