EU budget: not a foregone conclusion 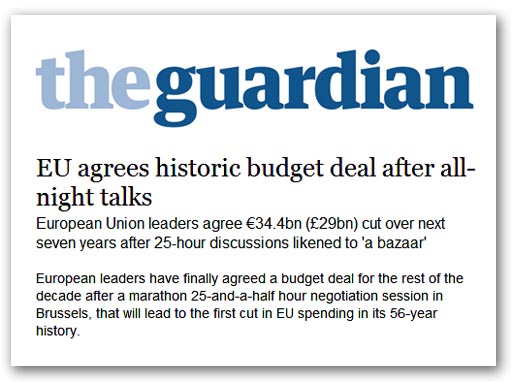 Strictly speaking, all the European Council has done is agree a "common position" on the multi-annual budget. There is no "historic budget deal". There is no EU agreement.

Says Mary Ellen Synon, Spiegel and many others, battle is not over. The European Parliament must still approve it, and that is not a foregone conclusion.

One needs to repeat this. It is not a foregone conclusion. We are told that Joseph Daul, chairman of the European People's Party parliamentary group, which represents the Continent's Christian Democrats, says a budget of €960 billion would be unacceptable.

"These proposals are going in the wrong direction, attacking one of our best tools to generate growth - the European budget - of which 94 percent goes back to the member states. The proposal we have today is a political capitulation and we are going to reject it," he says.

Synon is even more robust on this, making talks of "victory" extremely premature. One wonders, though, whether Mr Cameron has really registered what is going on, but then this is a man who confused "debt" with "deficit" and believes that Norway has "no influence at all" over EU regulation.

That said, the media, as in the loss-making Guardian here have no excuse for their headlines. They are badly misrepresenting the situation.

Then, we've seen a lot of that lately, on fishing and the CAP. The British media really doesn't "get" the European Parliament, any more than it does the EU generally.

If Mr Shulz, has his way, though, Mr Cameron's "victory" will not be lasting very long. Then, perhaps, the media might wake up to what is happening, but I somehow doubt it.