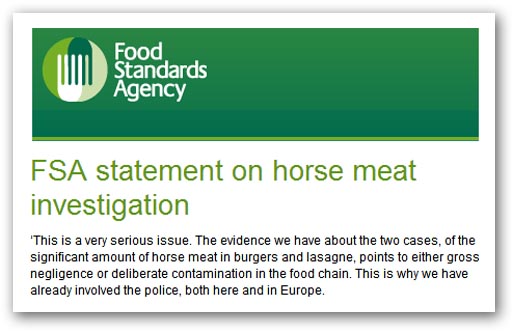 With the latest developments, the FSA reports that it has "already involved the police, both here and in Europe".

That is an explicit admission that imported meat is involved – which we already know, because produce of Irish and Polish origin has already been mentioned in media reports.

What is not mentioned is the elephant in the room – the EU. The whole of the meat chain, from farm to store, is regulated by EU law, with meat and meat products subject to a stringent and expensive regulatory regime which replaced the British system.

But what also goes with the territory are the Single Market rules. Produce from an EEA member, with paperwork that conforms with EU requirements, cannot be checked at port of entry.

Neither, without firm evidence of a problem, are we allowed to check imported meat at the point of sale (or at any point in between, during processing and distribution) on a scale greater than we do meat of domestic origin. This is prohibited under EU law, as discrimination on the ground of nationality.

Therefore, our system is entirely dependent on the good faith and efficiency of EU member states in policing food standards, to make sure that what is in the boxes is what is on the EU-regulated label.

Of course, the system does not work, and will never work without the back-up of routine regulatory spot-checks, with special emphasis on imported goods, which are most likely to be substandard. That deterrent effect is lacking in the current system – the crooks know there will never be any checks until it is too late.

But if we are never told of it, how will we ever know? The criminal negligence here is in a criminally inadequate regulatory system, one imposed for political expediency rather than efficacy.