EU politics: a debate in the House 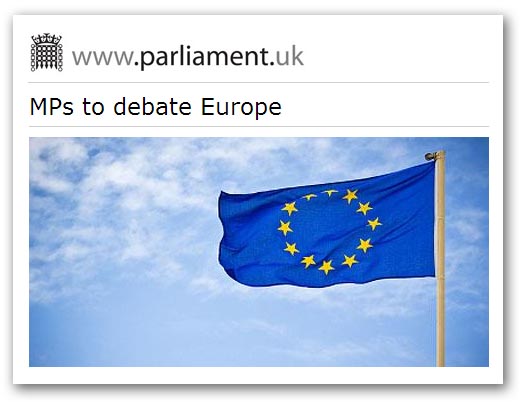 It was opened by foreign secretary, William Hague. "A new global race is underway", he says. Would this race be the political class?

It is very difficult to take this debate seriously. We have Richard Ottaway, chairman of the foreign affairs committee, referring to "the Single Market … a British invention of Margaret Thatcher". Imbued with such formidable ignorance, people such as these disqualify themselves from the wider, grown-up debate.
Then you have Julie Elliott, Labour MP for Sunderland whinging about "uncertainty" and commercial interests - with not a hint of understanding the arguments about membership of the EEA. She is locked in a time warp.
Bill Cash leapt to his feet, commending Cameron rejecting the notion of "ever closer union", and calling for a referendum in this Parliament - before the next European elections. Everybody knows that there is a very serious requirement to have a decision earlier rather than later.
Cash is asked whether he would campaign to come out of the European Union.  He answers that he believes that Cameron is right to have an in-out referendum, and if the democratic principle of whether or not people can govern itself, he will vote for "out". On the economic front, his "positive way forward" is effectively an "association of nation states".
There is indeed a time warp surrounding the House of Commons, keeping the real world and the 21st Century at bay. Some people believe these are our "leaders". They are followers in the debate, so far behind the curve they can't even see it, fortified only by their own ignorance.
Andrew Selous believes that people are "grown-up enough" to make a sensible decision in the national interest. How sweet. We (the Conservatives) have been consistent in wanting to allow the people to have a say in these issues (the EU) he says. And MPs wonder why they are treated with such contempt?
This is march of the clichés. It is the role of politicians to make informed judgements says Mark "it's about geography" Hendrick, Labour member for Preston. But there is no sign of that happening, or even any sign that it is possible.
So far, we have heard nothing that hasn't come out of the Janet John primer on "Europe". Thank goodness the back-benchers are only allowed to speak for seven minutes. Any longer would be a cruel and unusual punishment.
But any amount of time from the patronising Brian Binley qualifies in that respect. We need to play a proactive part in the global village, he says.
He is followed by Kate Hoey who thinks that Cameron is right to call for taking powers back from "Europe".  This is the "eurorealistic case", she says - the Common Market which we all joined has changed so much. She has a nice go at the ex-thief Richard Branson and his support for the euro. He was wrong then and he is wrong now.

We then suffer Andrew Turner, another MP who thinks the Community started off as a Common Market and somehow lost its way. He wants it to change course, or the people should be allowed the choice of in or out. He hopes the prime minister can renegotiate, so that full sovereignty remains with the Commons. "The issue is sovereignty", he says.

John Denham rises to tell us that anti-Europeanism is "driven by fear". The debate does not divide europhiles from europhobes, but pessimists from optimists - traditional pessimists like UKIP, those who wear flapping white coats.

Carswell wants to know why only the political elites should be allowed to make the decisions, but he doesn't get an answer. Denham who makes being offensive an article of faith, is of course a member of the Executive Committee of the Fabian Society. No more need be said.
And so to David Ruffey who tells us that there is little more than 20 miles across the Channel, where there are calls for "deeper, thicker integration". The bottom line is are we better off in or out ... these are important questions that need to be addressed. He's been taking lessons from Peter Sellers.

But even he shines compared with Alison McGovern, educated at Brookhurst Primary School, and then Wirral Grammar School for Girls, where she was the Head Girl from 1998-1999. She then studied Philosophy at University College London. On graduation, she worked as a researcher at the House of Commons, before handling communications for development projects at Network Rail, becoming a councillor in the London Borough of Southwark and then MP for Wirral South.

I've had enough. I can't take any more. I'll read the rest on Hansard, when it's up.