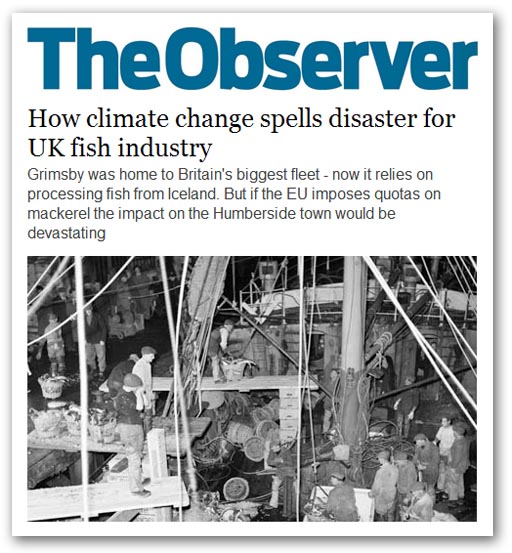 Continuing on from Part I, where we wrote of the complexities of the dispute that has been dubbed the "Mackerel Wars", we find a muddled piece in today's Observer which demonstrates the difficulty in getting to grips with this subject.

Referring again to this briefing note, we find that it is a matter of undisputed record that the mackerel biomass has been moving north, a phenomenon attributed to "climate change", triggered by higher water temperatures which have shifted the food supply, with the fish following the food.

Prior to 2008, the bulk of the catch was taken from EU Member States water, from Norway and, to a limited extent by the Faroe Islands, with a small amount also taken by the Russian Federation.

Things then changed in 2009 when the mackerel started moving is large numbers into Icelandic waters, and the catches there started to become significant. This gave Iceland status as a "Coastal State" within the NEAFC and a seat at the table when it came to negotiating annual quotas.

Here, it starts getting seriously complicated for, within the framework of NEAFC, guided by the UNCLOS and FAO agreements, the body of record for setting upper quota limits is ICES, which in turn is reliant on its scientific research with input from member states.

At that time, ICES set the mackerel quota, specified in terms of the "recommended total catch" at 572,000 metric tons. This was not enough to sustain the existing fleets in Norwegian and EU Member State waters.

Invoking the NEAFC rules, Norway and the EU thus argued that "track record" should determine the apportionment of the quota and since neither Iceland nor the Faroes had a qualifying record, they were not entitled to any quota. The pair then promptly awarded between themselves a quota that amounted to ten percent more than the total catch recommended by ICES.

Faced with this, Iceland and the Faroes felt they had no alternative but to award themselves unilateral quotas, allocating themselves 85,000 and 13,000 metric tons respectively, thus triggering the conflict which remains unresolved to this date.

At the heart of this, though ñ and especially as far as the Faroes were concerned, there was a great deal more at stake than just Mackerel catches ñ a stock which the Faroese were not equipped to exploit. There were two other issues which were to driving the dispute.

Firstly, the much more important issue to the Faroes was their traditional herring fishery, and the blue whiting, these valuable fish inhabiting the waters into which the mackerel had moved. And what Faroese scientists were able to show was an alarming situation.

Not only did the two species compete for the same food ñ largely the zooplankton Calanus finmarchicus - but the biomass of fish in their waters has been close to record high, while the zooplankton has been on a declining trend to a record low, and the blue whiting was declining rapidly.

This ties in with the second point where there is a major conflict in fisheries management philosophy between the Faroese and ICES in determining allowable fishing effort. ICES work on the basis of calculating the "Spawning stock biomass" and, by a series of species-specific formulae, then calculating a safe level of human predation ñ which becomes the recommended catch.

On the other hand, the Faroese fisheries management system relies on a far more sophisticated range of measures, rather than using quotas as the control instrument. They aim to balance fishing effort in relation to the ecosystem in which it takes place and, in particular, to keep the fish population in balance with the food supply, a philosophy which has gained powerful scientific support.

Thus, where there is a deficiency in food supply for a fish stock, be it because of industrial fishing or natural phenomena, the correct way to deal with it is, counter-intuitively, to increase fishing efforts. And, with their increased mackerel quotas, that is precisely what the Faroese ñ and the Icelanders in their wake ñ are doing.

The response of the EU has been severe. Reports in Augist 2010 were talking of a "mackerel war" and, as the dispute escalated, on 14 December 2011, the European Commission published a proposal permitting "the use of trade and other types of measures as a means to induce a reduction in the intensity of fishing by third countries allowing non-sustainable fishing".

Citing UNCLOS and the UN Fish Stocks Agreement, which they claimed had been breached, the Commission proposed to bypass the EFTA/EEA agreement with Iceland, and with sanctions also applying to the Faroes, prohibit the import of fish and fish products from these territories.

The final regulations 1026/2012 were published on 14 November 2012, leading to strident calls from Scottish Fishermen for sanctions to be imposed.

For 2012, the dispute had escalated out of all proportion, with the Icelanders having set themselves a mackerel quota of 145,000 tons, and the Faroe Islands setting a massive unilateral quota of 148,375 tons ñ even though they do not have the facilities to process the fish.

As the war of words hotted, Scots mackerel fishermen found their own quotas cut and promptly accused Icelanders of "mugging" them of their catches, "plundering" the stocks and putting their £164-million industry at risk. Scottish fishing minister Richard Lochhead said that "the irresponsible overfishing by Iceland and the Faroes" was putting the viability of the Scottish fleet at risk.

And this is where the Observer piece comes in. Since Iceland's banking collapse of 2008 and its subsequent attempts to fish its way out of a crisis, Grimsby has boomed on the back of the surge of fresh white fish from Iceland. If sanctions were to be applied, 70 percent of the UK's fish processing industry, along with Europe's biggest concentration of cold storage facilities, would be at risk, alongside 4,000 jobs.

The latest development seems to be a statement from Danish fisheries minister Mette Gjerskov, who has said that it is "quite unlikely" that the European fisheries and maritime affairs commission will approve sanctions against Faroes and Iceland.

The fact that Norway and the EU have decided to allocate themselves 90 percent of the total recommended mackerel catch for 2013 means there will probably be little legal ground for sanctions to be approved, Gjerskov said. Ironically, aside from the Faroes and Iceland, the biggest potential loser from this ongoing dispute is the United kingdom, with two dogs in the fight. On the one hand, Scottish fishermen are being affected and, on the other, our fishing processors stand to lose a massive part of their income.

Yet, the one nation which is not allowed directly into the talks with the parties involved in the United Kingdom. Outside the EU, we could but, in order to preserve that precious "influence" about which Mr Cameron is so keen, we must allow a Greek politician to make the running from Brussels.

And that is yet another benefit of our membership of the EU.