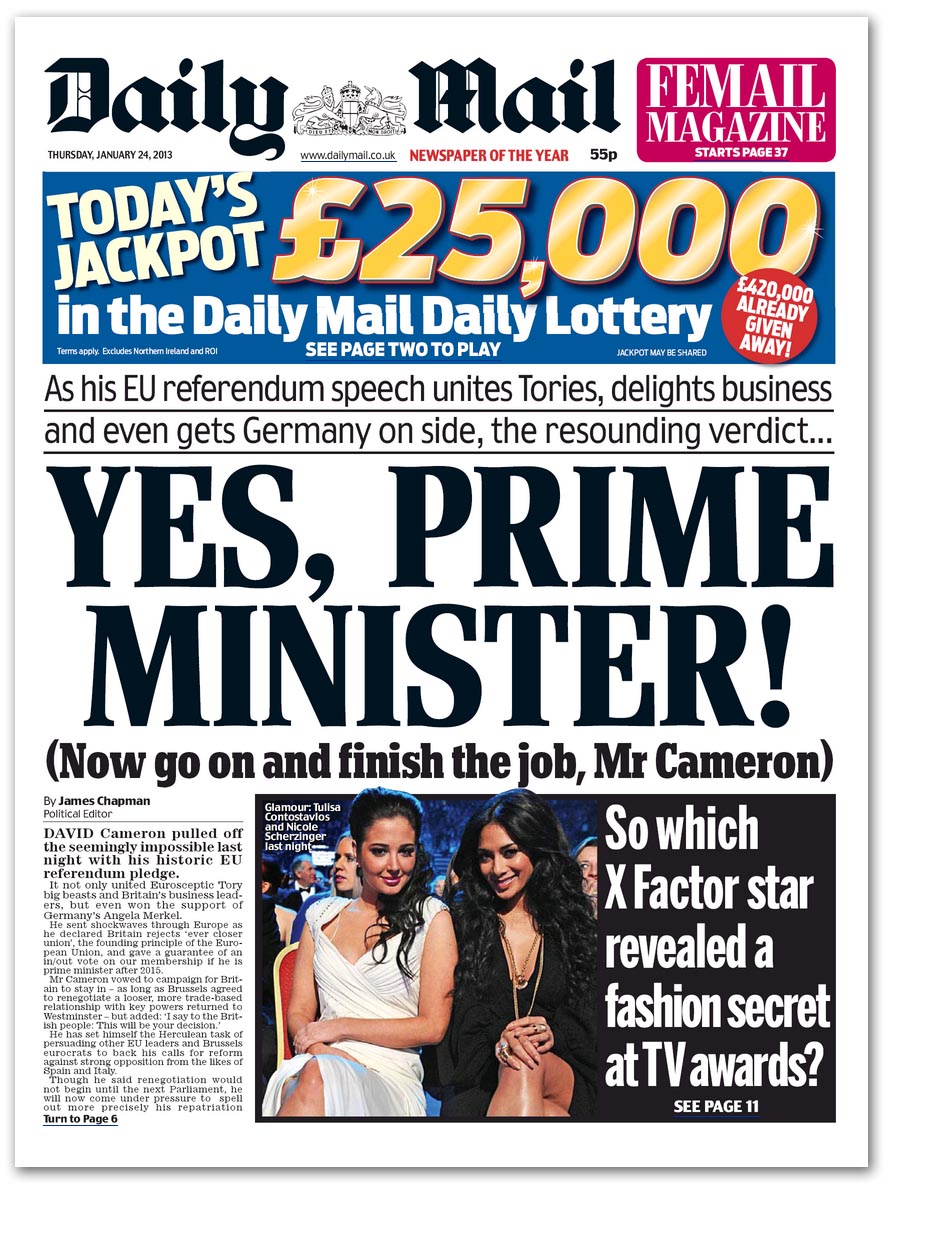 If Mr Cameron has judged it correctly, yesterday's euphoria over the announcement of an EU referendum will be sufficient to carry his party to victory at the 2015 general election. What happens at the euro-elections in the interim is of very little consequence.
With a Conservative administration in place, however, we will see the start of a period of great danger for the eurosceptic community. While a referendum presents a great opportunity, the default position is that we lose it. And the consequences need hardly be spelled out. It will set back the anti-EU movement for a generation.

It is, of course, a given that the renegotiation, if it ever gets off the ground, will be a sham. But that is Mr Cameron's declared trigger for a referendum, whence the forces ranged against us will be formidable.

For a start, all three main political parties will be supporting the "sham deal", and we must assume that the legacy media will follow suit. Whatever their fine words now – and despite the limited license afforded to dissidents – the media represent the establishment and they will fall into line.

The state broadcaster will also give its full-throated support to remaining in the EU and we can also expect the ranks of "business" to go for the sham deal. They will be backed by a myriad of campaigning organisations ranging from the European Movement to Open Europe, reinforced by phalanxes of rent-seekers.

On our side, we do not as yet have anything approaching a coherent campaign. UKIP, as the single most visible organisation, is more of a liability than anything under the leadership of Nigel Farage, as long as it keeps pushing for unilateral abrogation of the treaties.

In fact, some of the biggest problems are going to come from our own side. As Witterings points out, we already have the "Matthew Elliott types" nosing around, seeking fame and glory as überführer of a putative "out" campaign.

On this, it would be as well to state that the "Harrrogate Agenda" has been incorporated as a non-profit company and we will be holding our first management meeting next month. It is certainly within the realms of possibility that we will be looking to be part of a coalition which makes a bid to be the official "out" campaign.

What must also be stated is that no-one, and no single organisation or group of organisations, is going to "own" this campaign. Already, we have seen the tendency of petty-minded, self-serving claques attempting to exclude certain voices, and we also see the legacy media trying to control access to the debate.

What these people must realise is that this is not a game, and neither is the referendum campaign to be treated as a plaything - or a launch vehicle for the politically ambitious. We will not be silenced, and nor will we be excluded from the debate, or from playing an active part in any campaign.

Crucially, we will be making our voices heard on the shape of the campaign strategy, and already have offered many thoughts on the subject. What we must be certain to achieve is a sound intellectual base. It is all very well playing with ideas about how to spread the message, but first we must have a credible message to spread.

Here, many people who call themselves eurosceptics are going to have to take a hard look at themselves. They might like to ponder, for instance, whether damning the EU as a "Nazi plot" and calling it the "Fourth Reich" or the "EUSSR" is quite the best way to convince voters that voting for an EU-free Britain is the sensible way forward.

Similarly, those who continually brand our politicians, past and present, as "traitors" and the like, might care to wonder what effect that might have on the electorate. And that applies to the whole of what Cameron delights in calling the "fruitcake fringe". We've had our fun but now, careless words cost votes.

More mainstream, however, is the "magic wand" model of extracting ourselves from the EU – better known as immediate repeal of the ECA. In the context that our opposition will be seeking to maximise the perils of decoupling from the EU, advocates of this option really need to ask themselves whether they want to win a referendum, or whether they simply enjoy grandstanding.

For many years, such points have not really mattered, as there was no referendum in the offing. But now there seems to be a genuine prospect of casting a vote that will lead us from the supranational maw, we have to recognise that playtime is over.

We need to get down to work.